Project and libary setup for sharing and collaboration (KiCad version 5)

This information is written with KiCad version 5 in mind.

There are at least two schools of thought how to best set up your project and libraries for sharing or collaboration regarding library management. One can either have mainly global libraries or exclusively local libraries. These are of course the extreme ends of the spectrum. Understanding both of them should allow you to find the best mix that best fits your needs.

5 Likes
Need help making and saving footprints and symbols
Library structure best practices
Supercapacitor hole size
Help with custom symbol and footprint management
How to share a sheet?
Loading backup pcb files
What are the cache and rescue libs and how does the schematic rescue dialog work? (KiCad version 5.x and earlier)
View model field in symbol editor properties window
Power Flags, ERC and Diodes
How create a symbol library for all items in a schematic?
How to embed Library Parts in a Project?
I come from Eagle. What should i know about KiCad?
Project specific component library
KiCAD misplaces symbols in schem editor
Recommended workflow for local footprint changes?
Some library questions
Impressed by Kicad, but
Kicad own symbol merge strategies
Eeschema renaming all device names by itself
(Start Here) Frequently Asked Questions
Library Conflicts Between Users? How to Solve?
Shared libraries on the server
New project file format
Archive_project plugin - unarchiver?
Strict limit to local libraries
Running the same project across different machines
Component or Symbol?
Library missing when project files copied into another system
Enviromental variables vs library managers
I get an error on PCBnew
When does a lib not allow editing
Rene_Poschl November 15, 2020, 9:01am #2

Why would you use a global setup?

The benefit of global libraries is that this type of setup scales very well with the number of managed projects and library assets. It is especially well suited for collaboration within a relatively stable team (example within a company). This includes sharing projects between different computers owned by you.

In this case the one time effort required by every user to set up the central (global) library pays of during the prolonged time of working together.

How to get Libraries to Everyone in the Team

This first time setup consists of ensuring that the libraries are available to the current computers file system (details depend on file sharing option) After that the library tables need to be set up and if used also path variables set. See Library management in KiCad version 5 for details.

The libraries themselves can live on a normal file server which is mounted in the usual way. Another option is to use cloud services for exchanging the libs. But possibly the best option is to have the libraries in some sort of version control (example git or svn). Be aware that merging library changes requires at least some basic understanding of the file format. So svn with locks is a good option or using a pull request based system for git (gitlab, bitbucket or similar).

Manage what can get into the Central Library

It is beneficial if there are clear rules about library organization and asset design. Maybe even a review process that reduces the chances of an error for library assets before they are used in a project.

Continuous integration tools can help with the review process. Especially to check some common rules are followed (like a specific set of symbol fields that need to be filled for consistent BOM creation.)
As an inspiration take a look at the tools used by the official library team: https://gitlab.com/kicad/libraries/kicad-library-utils (symbol check scripts are in the schlib subdirectory and footprint check assets in the pcb subfolder)

Guide to the First Time Setup

One can include the library tables for the shared libraries in some way to ease first time setup. It is suggested to use path variables for best results (otherwise all team members must place the libraries at the exact same file system path).

Sadly KiCad has no way to import a library table into an existing one. So one option is to include a full library table containing all libraries that are allowed to be used (So possibly including the official libraries in addition to your libraries).
This allows users to copy these tables directly in their KiCad config directory or if they never opened KiCad before use the first time setup dialog to point to this library table.

Another option is the use a text editor to copy the team entries into their tables. A saver option would be to develop a simple script that handles this task. Make sure no entries are duplicated by this step.

There is the option to directly link the user library tables to a central location. This will give the library team even more control over what assets can be used in projects.

Another option is to point KiCads config directory into a config directory within the library location by setting the environment variable KICAD_CONFIG_HOME as described in for example Running several KiCad versions on the same Windows machine. This really only works when using version control systems that allow excluding config files other than the lib tables.

Why would you want to go this route?

Using only project local assets all living within the project directory ensures that people you share this project with do not need to set up anything to use your project. This is a good option if you just want to put your project out there for anyone to use (example as an open hardware project shared publicly)

And why you might still want to use the central option?

The downside is that such a setup splits up your library over different projects. Making it hard to keep track on which assets you already have. The more projects you make the more likely it gets that you will start to duplicate assets. (And possibly even repeat errors you made in the past like again reading the drawing in the datasheet as top view instead of bottom view)

How does this workflow work?

Symbols, footprints and optionally 3d models used in a project are all placed in project specific libraries. These libraries are placed inside the project directory best in their own subdirectory. An example is shown in this picture. 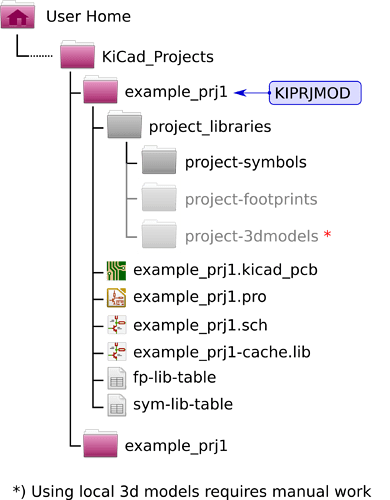 KiCad automatically creates the path variable KIPRJMOD that points to the projects root directory (as indicated in the picture above).
This path variable is used inside the project library tables and for handling 3d models.

You still want a central library to source your assets.

You probably do not want to start fresh for every project. And you really do not want to copy assets around between projects either. Which means the best option is to still create a central library that you use as the source for your assets.

In this workflow you would add any new asset always to the centralized library first. But any asset that is used in a project is first copied to a project local library and this local copy is then used.

Another option is to design your projects fully with the central library and only convert it to an atomic setup at the end (just for sharing) There is the archive project plugin that automates this task.

Footprints sadly directly link to a file path for the 3d models. You will need to ensure that you use the path variable KIPRJMOD here.

One option here is to define a common folder structure within the project (the folder containing the 3d models of the project must always have the same name). With this restriction set up the footprint to point to the file location as expected in a project following this rule.

Viewing the project without the option to make changes can use a modified version of the local setup.
There is no special need for viewing the layout as footprints are already included in the layout (pcbnew) file.

For 3d model sharing the best option might be to export the board as a self-contained step or wrl (or vrml) file. Either directly from within KiCad or via the kicad-stepup extension of FreeCAD.