What are the cache and rescue libs and how does the schematic rescue dialog work? (KiCad version 5.x and earlier)

The purpose of the cache library

KiCad version 5 and earlier do not include symbol information in the schematic file format. Without any counter measure changes to the libs would change the schematic without user control (worst case a symbol is deleted from the lib and the project looses its information).
This is where the cache lib comes in. Anytime a user adds a symbol to the project it is copied to the cache lib for save keeping (unless the same symbol is already in the cache). If now the libraries change then there is a way to protect the schematic from change. This means this library should not be changed by the user directly and it must be included when the project is archived, shared or backed up. See Project and libary setup for sharing and collaboration

The purpose of the rescue library

The rescue lib is a possible result of the protection mechanism. If KiCad discovers that a symbol in the cache lib differs from the one in the normal library then the user is presented with an option to rescue it. If the user declines this offer then the cached symbol is overwritten with the current state of the normal lib.

However, should the user decide to rescue then the rescue process copies the cached symbol into the rescue library. The symbol references in the schematic are updated to point to this new instance inside the rescue lib and the rescue lib is added to the project local symbol library table if required.

What is not cached?

The cache library does not contain the symbol documentation nor does it hold the values of fields. These are stored in the schematic file itself as they can be set to different values for different instances of the same symbol. Which also means that not rescuing the symbol will keep the field values as set in the schematic. To update fields from the library use edit->update fields from library.

The rescue dialog is used for controlling the rescue process. A symbol is either selected to be rescued or to be updated from the library with it. 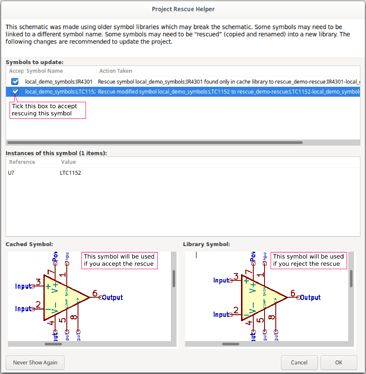 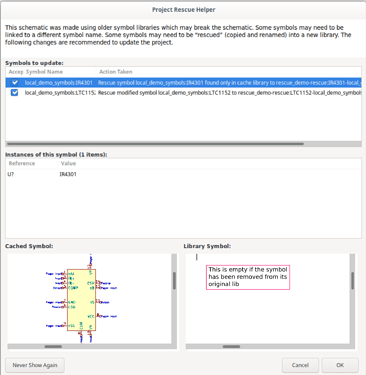 Changing a multi unit symbol does not trigger the rescue dialog in 5.1.5. See https://gitlab.com/kicad/code/kicad/issues/3879

Why does my project suddenly display some (or all) symbols as question marks?

This happens when KiCad does no longer have symbol information. For example because you did not rescue symbols missing in the libraries (you deselected them in the rescue dialog or clicked cancel).
Another option is that your cache library was lost or damaged.

Fixing this is not straight forward. You will need to find the original library version that was used when the project was created and then need to set up KiCad to that library. This will allow the cache library to be regenerated.
You can alternatively use the edit library references dialog to point the symbols to equivalent symbols in your current library version (This does not check if the symbol you now chose is really equivalent! So double check the result carefully. See remap tutorial linked below for details about that option)

Special case: The project was made in v4 and opened in v5

Another possible reason for ending up with a number of question marks is that you updated from version 4 to version 5 and made a mistake when remapping. See Converting KiCad version 4 projects to version 5 (Remap a project) (includes a detailed description how to fix this problem and how to avoid it in future)

5 Likes
Re-mapping of library
Have we got a way to cut/paste between schematics?
KiCAD Schematic symbol error
Libraries. Don't new projects create their own library to store it's symbols
Schematic symbol error
Project and libary setup for sharing and collaboration (KiCad version 5)
Netlist not populating properly
Libraries missing open KiCad 5.0 project in KiCad 6.0
How to rename a sub-sheet?
Schematics are all question marks
Does KiCAD have the features I use in Altium?
I come from Eagle. What should i know about KiCad?
When I copy a block from one project's schematic to another project it tells me rescue symbols are not available
KiCAD misplaces symbols in schem editor
Some library questions
No symbol found in library
Moving libraries
Moved symbol libary now schematics want to recover
Libraries are not found!
Cannot Open Schematic
74253 vs 74LS253 vs 74F253 schematic symbols and the "74xx_IEEE" library
What is the relationship between the .lib files?
Symbols from my Library are removed and put into a new "rescue" library
Symbols from my Library are removed and put into a new "rescue" library
Converting 5.X hierichal sheets to 6.X
New user - general comments and some suggestions
KiCad library issues with a new design
(Start Here) Frequently Asked Questions
Why does fp-info-cache get large even when nothing in it is needed?
Eeschema renaming all device names by itself
Library structure best practices
How to make capacitor and resistors to be updated from the library