Updating an existing layout from its schematic requires KiCad to determine which footprint was previously connected to which symbol to avoid undoing your past work. For this reason every symbol is assigned a unique identifier (timestamp based unique ID). This ID is also tracked by the footprint instance. The alternative option is to use the reference designator assigned to your symbol either by the annotation process or by hand.

Using the ID allows, changing the reference designator of a symbol (say, from R15 to R16) without it having any effect on which footprint represents it. Meaning the footprint will also be updated to reference designator R16 after the update process. This is normally what you want, which is why it is the default option.

So when would i ever need the “update by reference designator option”?
Let’s say you have a board with two duplicated sections (we’ll call them “Left” and “Right”). Left uses references beginning with 100, while Right uses references starting with 200.

You go ahead and lay out Left, placing and routing R101, R102, C101 and U101 and so forth.
Now, rather than doing all that work all over again, you copy and paste those footprints. You then edit R101 to be R201, R102 to be R202, and so forth. Then you do an Update PCB from Schematic with the “Match references” option selected to re-associate all the new footprints with the “Right” symbols. After that you can go back to using the default match method (since Kicad now has the correct associations).

User interface of the update process for KiCad 5.1.5

Disclaimer: Screenshots below are taken in KiCad 5.1.5 (should be equivalent in all 5.1.x versions)

The dialog where you select how this update happens is shown in the screenshot. 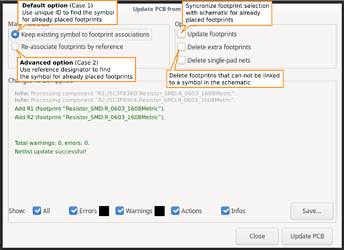 “Update footprints” determines if the footprint is changed if you change the footprint field of the symbol inside the schematic. The “delete extra footprint” option ensures that every footprint in the layout has a corresponding symbol (otherwise deleted symbols would leave orphaned footprints).

An overview of the data at play is shown in the next screenshot. Notice that you can not edit the unique id (or timestamp) directly in the layout. It can only be changed by selecting “Re-associate footprints by reference”. 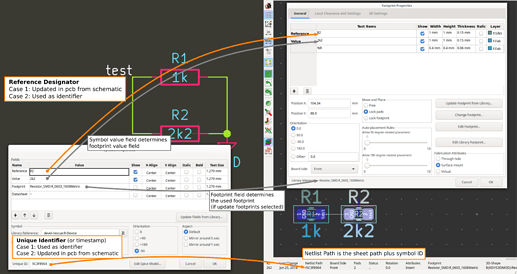 Because this topic raises problems and questions perennially, here is another explanation which goes into more details. KiCad version 5.99 (later 6.0) is used for reference.

In KiCad changes made in the schematic must be propagated to the layout explicitly with Tools -> Update PCB from Schematic. Notably KiCad must have some way to keep the connections between symbols and the corresponding footprints. Normally it’s done using internal unique IDs. Each symbol in the schematic has an ID. This is from a .kicad_sch file (KiCad version 5.99):

The unique ID which is path in the file, here path "/800ee8b3-48b2-4453-9721-def5d406289a", actually has the hierarchical sheet path and the ID of the schematic symbol. From now on we’ll use just “ID” for short. When the schematic and the layout are in sync the .kicad_pcb file has the corresponding footprint:

The same ID is there and it’s the internal link between the symbol and the footprint. Also the reference designator is in sync. The new footprint has been created in the layout with the normal procedure:

Compare this with the situation when we add a footprint directly to the board with Place -> Add Footprint:

There’s no symbol’s ID (path) there, and no meaningful reference designator. Even if you add a new symbol to the schematic and assign footprint “Resistor_SMD:R_0402_1005Metric” for it, there’s no connection between the footprint in the layout and the symbol in the schematic even though the symbol has an ID.

The user can’t edit the ID through the KiCad UI, but the reference designators can be changed. 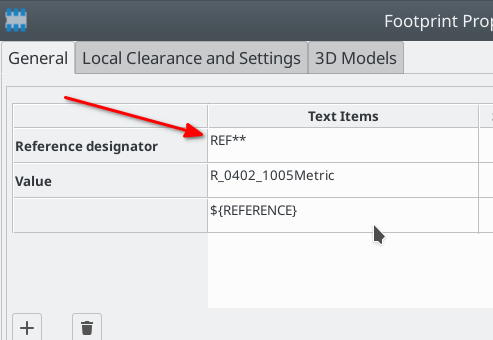 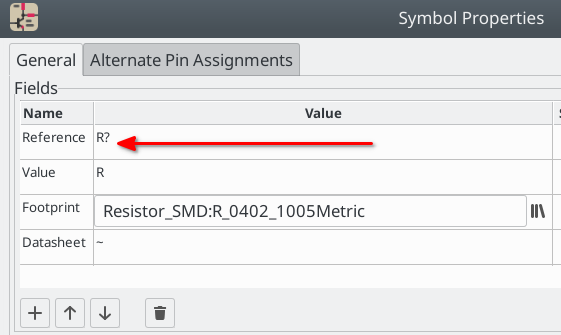 If both are changed to, say, R3, we have a symbol and a footprint with the Reference R3, but still the footprint and the symbol aren’t linked internally.

So, what we must do is to use the second linking option in the Update PCB dialog. We match by reference designator. Now KiCad finds the symbol R3 and the footprint R3. The footprint’s symbol ID is changed to the symbol’s ID. And now the schematic and the PCB are totally in sync again. After that the default linking method by the ID can be used again.

When to use each option?

The most common workflow is adding symbols to schematic, annotating them and then updating the PCB. The default match method by ID should be used for that. Also after partial or full re-annotation of the schematic the same option must be used. In these cases KiCad adds the ID to new footprints and finds the old footprints by the ID.

The other option – in version 5.99 “Re-link footprints to schematic symbols based on their reference designators” – should be used if for some reason the connection between the symbol and the footprint hasn’t been established with the normal workflow first or it has been broken. But in this case there must be matching reference designators. Otherwise there’s no way to tell which footprint belongs to which symbol. The use cases may be for example

The two matching methods can’t be used at the same time. Therefore the edits to the schematic/PCB should also be limited so that you either add symbols with footprint associations normally to the schematic and update the PCB by the default method, or you add non-matching footprints and symbols and then update using the “re-link using reference” method. If you try to mix the two methods you may run into situation which needs fixing or causes confusion.

In general, it’s better to keep the changes simple and clear. Do one kind of thing at a time and update the PCB. Then do the other thing. Don’t mix different kinds of changes.

If you want to update or change a symbol but keep the footprint, don’t delete and re-add the symbol. Instead, use Change Symbol or Update Symbol. Those functions keep the ID while deleting and re-adding changes it.

Version 5.99 has the new backannotation feature, “Update Schematic from PCB”. It’s possible to make certain changes in the layout and transfer them to the schematic. “Geographical annotation” is one nice application for that. If you use backannotation, make sure the schematic and the layout are fully synced first using Update PCB from Schematic.