KiCad has renamed its System variables in use for nightly builds that will carry into KiCad 6. This has become necessary to allow concurrent versions of KiCad to more easily co-exist on platforms in the future.

The Windows installer for new KiCad nightly builds from today onwards will now install into a versioned path.

Previously, KiCad would be installed into

Now KiCad nightly will install into

No more excuses for not installing 5.99 and testing it!

EDIT: There’s some problem in the latest nightly build installer ATM, see the linked thread. I suggest avoiding it until it’s fixed.
EDITEDIT: The latest nightly build works.
EDITEDITEDIT: I added instructions for easy safe installation procedure unless you want to wait for the official instructions. Just start from scratch. Because we are talking about nightly builds for testing, it may not be worth trying to keep old settings. (4th edit: read the post linked to below if you use 3D models.)

There was a small problem (which was probably related to the one mentioned by Seth above): I installed with the lite installer and left the 3d models uninstalled. The new path variables were added but the new 3d model path pointed to kicad\ folder instead of kicad\5.99. This means that if I wouldn’t have noticed it and installed the library later, KiCad 5.99 wouldn’t have found the library or would have found it in the wrong place. Re-installing from scratch with all libraries (also deleting th…

Important notice to those who use JLCPCB: Apologies from atommann (an engineer from JLCPCB), about Gerber X2 files at JLCPCB. At the moment they are not able to handle gerber X2 / aperture macro combination properly in gerber files.

The working solution for 5.99 until JLCPCB gerber processing is changed

This change is relatively new in 5.99. It is possible that there are other manufacturers who have problems with gerber X2 + aperture macro combination.

EDIT: It’s not necessarily the combination of these two, but JLCPCB has had some problems with X2, and now has with the new aperture macros produced by KiCad even though aperture macro itself is an old feature of X1. In any case disabling both should always work.

This comes a bit late, but for those who use python plugins:

Version 6 will not work on Windows 7. Windows 7 soon to be no longer functional for 6.0

Arc track / Curved track interactive resizing has made it into v6 as part of MR 608. This should trickle into the nightlies over the next few days.

See below video for demo:

Awesome! thanks for highlighting this

There are some news about the translation system migration that stoped some PPAs?

KiCad will now use C:\Users<username>\Documents\KiCad\5.99\scripting\plugins as the preferred location to load plugins.

14 posts were split to a new topic: Paths in upcoming versions

This plugin path change ignited many comments and also other important information (changes on other platforms) which can be found in the split discussion.

A change in generated gerbers.

Some other changes to pads caused problems with 3rd party software (most notably JLCPB CAM), so you should be aware of this one, too. It depends on the features used on the footprints/layout whether some problems are triggered in other software or not. If you have access to some 3rd party software which reads and and interprets gerbers, please test, or send gerbers with all kinds of pads in several rotated positions to your manufacturer. (Do not disable aperture macros for these tests.)

For new installs (or for when you wipe out your config directory), the hotkey Ctrl+H is changed from the legacy “high contrast” toggle to the new 3-state layer display mode toggle. This will cycle through showing inactive layers normally, dimmed, and off (the old hotkey just toggled between normal and dimmed).

If you don’t erase your config, this change won’t affect you, so I encourage you to consider making this switch yourself in your hotkey preferences:

If you haven’t tried this feature, it’s like the old “hide all layers but active” action available from right-clicking the list of layers, but better: unlike that one, this will keep working as you change layers.

Will the excellent plugins by @maui and others (e.g. StepUp, RF tools, via stitching,…) work with version 6 when all is said and done and ver. 6 is officially released?

Each plugin developer (or someone else) must port the plugin to v6. So, it depends.

Will the excellent plugins by @maui and others (e.g. StepUp, RF tools, via stitching,…) work with version 6 when all is said and done and ver. 6 is officially released?

ATM there is a big issue on v6 because the code has changed a lot and Vias/Traces are invisible after plugin run. The user needs to save and reopen file to see them, even if they are in the file.

Any plugins for via stitching in v5.99 Layout

FYI It’s on my todo list to fix this plugin on V5.99… I hope to find enough time to do that on a couple of days…

There are already issues discussed at gitlab, but still open:
issue #5678
issue #7065
Without #7065 closed (solved), nothing could be improved on plugin side.

Each plugin developer (or someone else) must port the plugin to v6. So, it depends.

this broken doesn’t depend at all on plugins developers, but it is a bug/missing feature on k code.
It is all on k devs to decide how approach the python support.

few comments relevant to the issue:

really Python programs should not be using BOARD::Add but the normal COMMIT infrastructure is not exposed right now, and I’m not sure the history behind that

Many script need to add items to a board. It allow opportunity to have many “small” feature (On my side, ViaStitching, but many others) developed by the users…

this broken doesn’t depend at all on plugins developers,

My comment was aimed only at the changed API in general. I’m not familiar with the details or bugs, so thanks for the first hand knowledge, it’s pretty important to know.

Now introducing MSVC builds for testing. This new packaging includes Python 3.9 support. Additionally, we have wxWidgets 3.1 bundled which brings bug fixes and improvements such as improved high-dpi support OpenCascade 7.4 is also bundled which brings some additional 3d model parsing bug fixes. Note: Windows 7 is no longer supported by these KiCad builds due to Python both dropping support and switching to Windows 8.1+ APIs. These builds operate just like the “msys2 nightly” otherwise. You …

(The link there leads to “testing” directory but it seems to have 5.99 nightly builds.)

(The link there leads to “testing” directory but it seems to have 5.99 nightly builds.)

If there are no issues found, we’ll probably change the main nightly folder to contain msvc builds soon, after they get a few more testers.

How can I do this?

There’s a new tool that lets you convert lines/tracks to polygons/zones/keepouts and vice versa.

I think it’s pretty handy for creating zones from imported DXFs, replicating some copper traces on the silkscreen layer, and things like that. 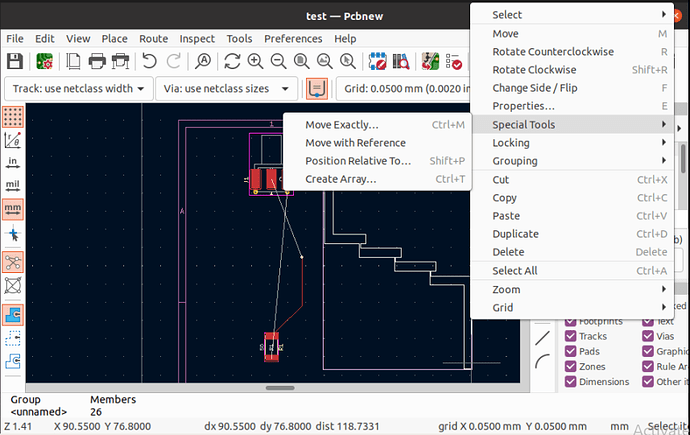