Thanks to Jon, we can now hide ratsnest lines for a net. Select a board item belonging to a net (most often this would be GND or some other ubiquitous net which makes it difficult to discern other nets). Open the context menu and you’ll see Net Tools and can hide/show the selected net.

There’s also some backend support for coloring nets, but there’s no GUI yet.

EDIT: I created a new thread New Net Tools in pcbnew 5.99 because I can foresee this will raise comments, questions and feature requests.

Small warning: I didn’t post about this yet because there may still be a bit of churn in how exactly this works. It should be safe to play with though

Net Classes can now be assigned in Eeschema. They can also be used to color/style the wires & busses of a net. (And of course they feed through to PCBNew Net Classes.)

Will the Backup exclude other ZIP files to prevent ever expanding ZIPs?

Yes. In fact, there is a fixed list of file extensions that will be backed up: https://gitlab.com/kicad/code/kicad/-/blob/master/common/project/project_archiver.cpp#L157

Net Classes can now be assigned in Eeschema. They can also be used to color/style the wires & busses of a net. (And of course they feed through to PCBNew Net Classes.)

Will it be possible to display the net names on the schematic or just assign them? Could you automatically just apply labels as net names?

I’m not sure I’m following. Net names are already applied by labels.

We’ve talked about how to visually indicate net classes on the schematic.

Please continue the discussion in the dedicated thread: Net classes in Eeschema (5.99).

It’s now possible to create a new net in pcbnew with Inspect -> Net Inspector. It can then be assigned to a pad in the pad properties. The change can also be fed back to the schematic with Tools -> Update Schematic from PCB (with more or less success).

This is an answer to long standing need for easier PCB-only design (WireIt plugin has been used for it).

Again, I opened a new thread for discussion: Creating nets in Pcbnew (5.99).

Note: this is my interpretation and doesn’t necessarily reflect the development team’s intentions accurately, so take this with grain of salt.

Until very recently many issues in gitlab had the milestone for v6 even though it wasn’t certain if someone would implement them. Now there’s milestone 7.0 and some issues were moved to that: https://gitlab.com/kicad/code/kicad/-/issues?milestone_title=7.0.

6.0 Feature Freeze is for new (major?) features. For each proposed feature it must be decided if it actually will be implemented for 6.0, and now it seems to be the time to make those decisions. If nobody hasn’t volunteered to implement a feature, it won’t be in a condition to be included when the feature freeze moment comes, and it can’t be set to that milestone.

The rc milestone is mainly for bugfixes and other smaller changes. They must of course be ready when 6.0 is finally released.

I see 7.0 as preliminary in nature; ATM it includes only old feature plans which were postponed because of lack of manpower. They can be postponed even further, or maybe there will be 6.1 where something can be implemented.

6.0 Feature Freeze and 7.0 should correspond roughly with KiCad 6.0 Roadmap and KiCad Future Versions Roadmap but I haven’t checked how up to date those are right now.

This is essentially accurate. Our plan is to announce the feature freeze in September and move on to polishing the features and fixing bugs.

This is also why the rc1 burn down chart doesn’t look good but the FF chart looks promising.

We’re pushing other ideas to the 7.0 milestone as a convenient place to store them. Once 6.0 is released, we hope to sit down (maybe at FOSDEM if it happens) and hash out plans for 7.0 features.

There’s discussion going on about dropping support for 32 bit Windows because the build system is dropping it: https://www.mail-archive.com/kicad-developers@lists.launchpad.net/msg38718.html. No decision yet, but better be prepared because it will eventually happen some day.

There cannot be many PCs around with 32 bit hardware
For some reason some corporates have hung on to 32 bit Windows due to compatibility fears with old custom software.

KiCad source code has new build dependencies, see the announcement by Ian: https://www.mail-archive.com/kicad-developers@lists.launchpad.net/msg38729.html. If you build from source and it complains about something missing, try these (lemon; GTK3 on Linux).

EDIT: Thanks, marekr – it’s not in yet, it’s being tested first.

It hasn’t been added yet

Geographic reannotation, i.e. reannotating based on the component positions on the board. 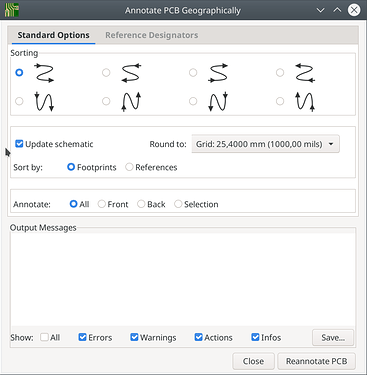 Hatched zones now get aprons around connected pads and vias.

There’s a new UI for managing the appearance of layers and objects in PcbNew.

If you use a color scheme where you set your copper layers to have less than 100% opacity, I highly recommend you try setting copper back to 100% and use the opacity controls per object type. I personally think it’s a lot easier to see when tracks are fully opaque and other items are translucent. 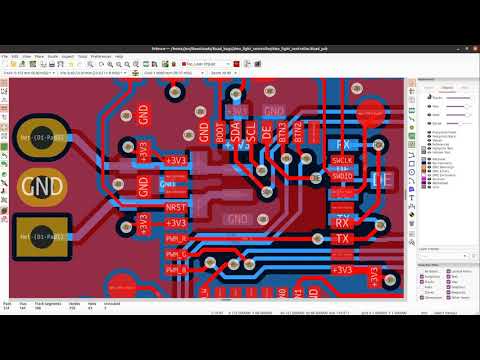 Demo of net and netclass colors: 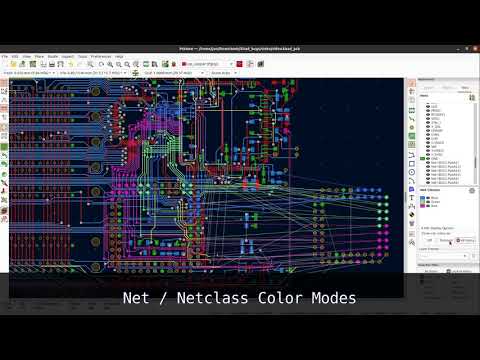 General discussion about the features should have their own threads, and Net classes in Eeschema (5.99) and New Net Tools in pcbnew 5.99 are fitting for the net system related discussion.