Coordinate system, grid and origins in the PCB Editor

This article describes the situation in version 6.0; many details are applicable to v5.1.

KiCad is a CAD system with 2D data which needs coordinates to mark locations of items. In theory it’s possible to have a CAD system which relies completely on constraints, not coordinates, but KiCad can’t be like that. There must be an internal coordinate system and all explicitly defined locations must fit to that system.

The layout editor has a resolution of 1 nanometer; that’s the smallest difference in X or Y direction which two locations can have. It also has an internal 0,0 origin for the coordinate system which is the “Page origin” – the upper left corner of the page area which you see when you open Pcbnew.

From version 6 onwards it’s possible to configure both the visible origin point and the axis directions.

It is important to know that these affect only the visible coordinates in the graphical user interface. The internal coordinate system and the board file aren’t affected. However, the drill/place file origin may affect the footprint position file and the drill file outputs.

These can’t be configured in version 5.

This is the same as the internal origin of Pcbnew’s coordinate system. Pcbnew has a concept of “page” even though the layout isn’t primarily for printing to a paper.

This has also been called “Auxiliary axis origin” or “Aux origin”.

This is a point which users can set. Earlier (in v5 and before) it has been possible to use it as an origin point when exporting certain files, but now it’s possible to use it as the origin point for the visual coordinates, too. Select Place -> Drill/Place File Origin. Alternatively use the right hand toolbar tool. In v6 long click on the origins tool or click and drag left to reveal and select the Drill/Place origin tool if it’s not already selected. 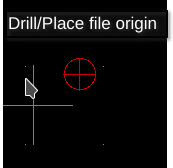 KiCad uses a concept of Grid. One grid is active at any given time. When items are placed or moved the cursor usually snaps to grid points but not outside them. It would be very inconvenient if the internal system with 1nm resolution would be used for item placement. It’s better to use a grid with for example 0.1mm or 10mil resolution.

If the user keeps the same fine pitch grid all the time the concept of independent grid origin isn’t necessarily needed. However, let’s suppose we use 10x10mm grid and want to place an item to each grid point. By default the grid starts from the internal 0,0 origin, so we have grid points in e.g. 100,100 110,100 120,100 etc. What if we want to start from 101,101 but use 10x10mm grid? This is where the movable grid origin comes in handy. If we open View -> Grid Properties we can set the point from which the grid is defined and being drawn. It’s the one point of the coordinate system which is always on the grid by definition. It’s not any coordinate origin, relative or non-relative, by nature, but it can be used as such. 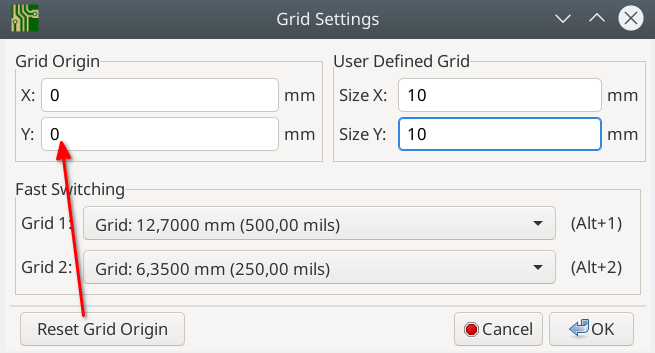 There’s one danger when changing the grid origin. As you can see in the illustrations above, the items which were positioned using the old grid origin are out of grid after changing the origin, and vice versa. If you have designed a board with certain grid and change the origin, you should change it back after you have used it for some certain need. Otherwise you may have difficulties, most of the items being out of the grid.

Use Place -> Grid Origin or alternatively the right hand toolbar tool to change the grid origin visually. In v6 long click on the origins tool or click and drag left to reveal and select the Drill/Place origin tool if it’s not already selected.

Local or User origin and coordinates

KiCad has a handy way to make measurements and see positions of items relative to some coordinate point without changing the coordinate system. Just press the spacebar on the keyboard. It sets the “Local origin” (sometimes called “User origin”). It’s a temporary point and meant to be used as a quick helper, not as a permanent reference point. It can be very useful when measuring distances and placing items.

10 Likes
Post-v5 new features and development news
Can X Y coordonate be reset?
When you have to reduce the size of your PC board
Question on FAQ about coordinate system
(Start Here) Frequently Asked Questions
Grid origin in KiCad 6? [Solved]
Resistors missing, newbie questions