Every now and then a question about multiple PCB projects pop up on this forum, and usually the answer is that this is not implemented in KiCad.

So I’ve been toying with this idea in my head of making a hierarchy of projects.
The Idea is that each PCB has it’s own project, but there is also a project that binds them all.
So today I did an experiment and documented it, and it seems to work quite well.

This it not meant to be a totorial for people new to KiCad, so stuff like Footprint assignment etc, is mostly skipped.

It’s probably best to keep this tutorial clean, and therefore I’ve opened another thread to add comments or ask questions. Please post those at:
https://forum.kicad.info/t/multi-pcb-project-discussion/17658

I do not yet know if this will work, but I’ll make some screenshots and document as I go. I start with making a few projects in the same directory:
“common”, “dac”, “micro”, “power”. When you make the projects, uncheck:

to put all the projects in the same directory. (Ignore the "directory is not empty warnings).
All 4 projects show up in KiCad’s project manager: 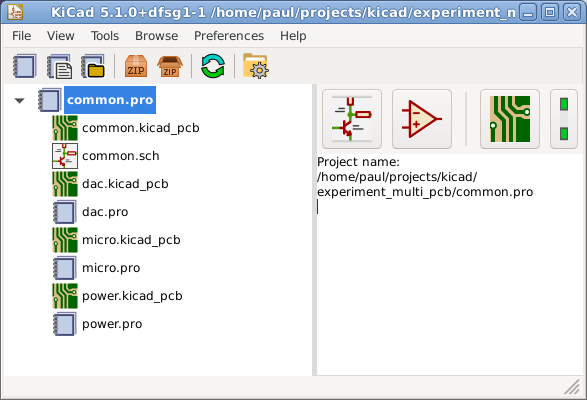 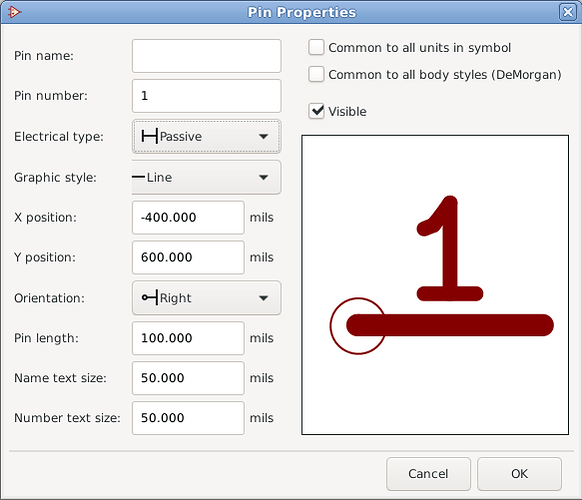 Place the pin somewhere on the board, and then hit [Insert] a bunch of times, so you have enough pins. I thought 10 would be plenty for now, and then click on the “Show pin table” icon. 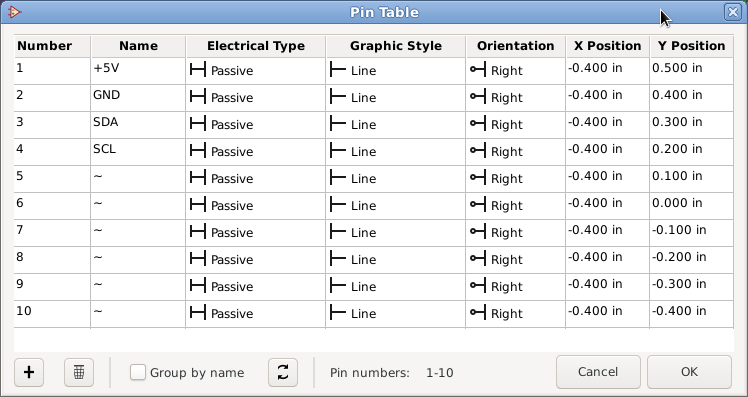 Then I moved the pins (by dragging as a block), added a rectangle, and filled it with background color:

I want all my Interconnect connetors to be the same, so I’ve also added the Footrpint to the symbol:

Here are the 3 Hierarchical sheets: 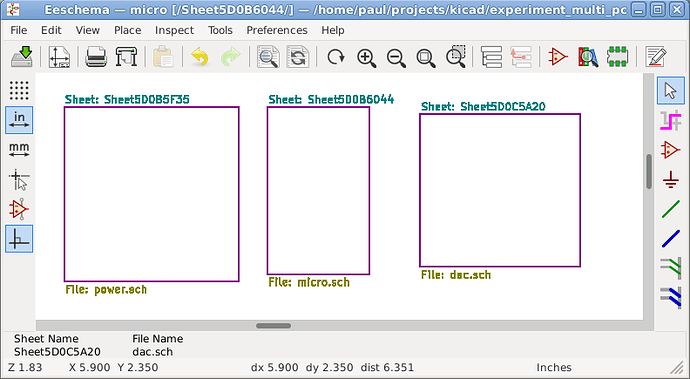 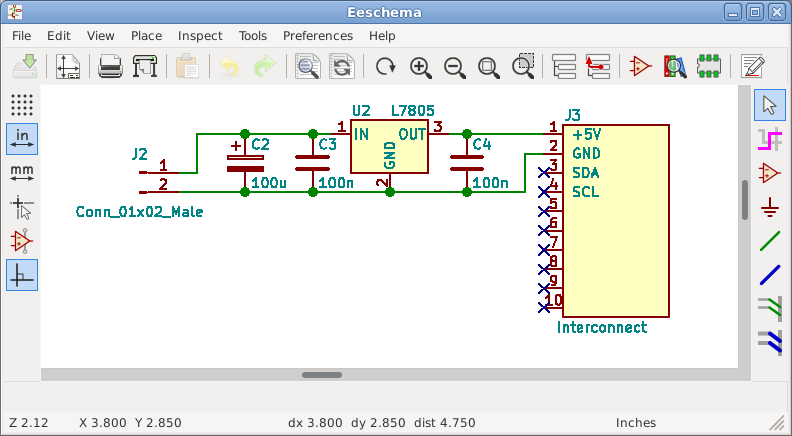 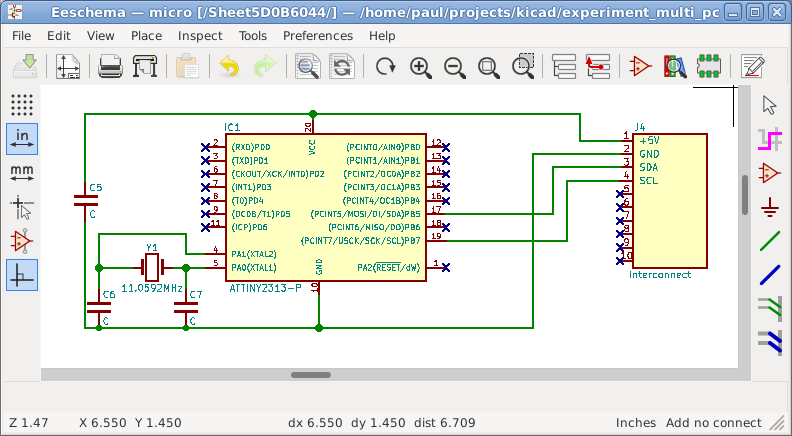 Then I cleared and redid the Annotation. As expected it does all the sheets in the project: 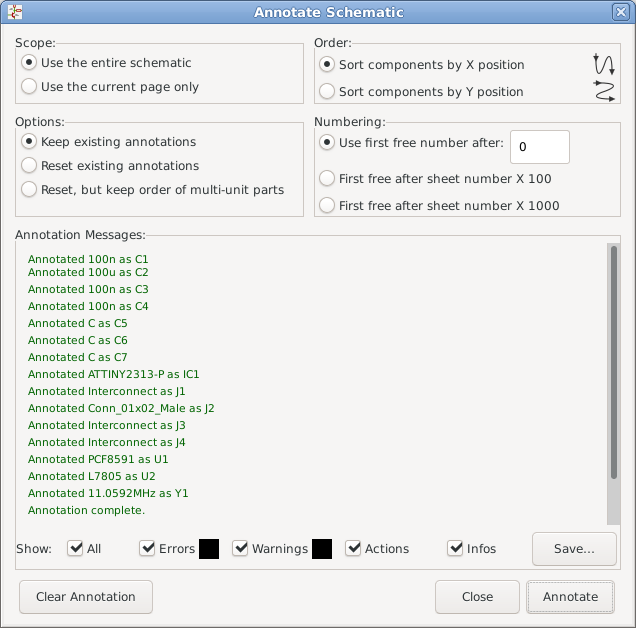 Now it starts becoming interesting.
The main goal of this experiment is to make 3 separate PCB’s.
Pressing [F8] (After some footprint assignment) takes the components of all the schematics, and puts them on the PCB. 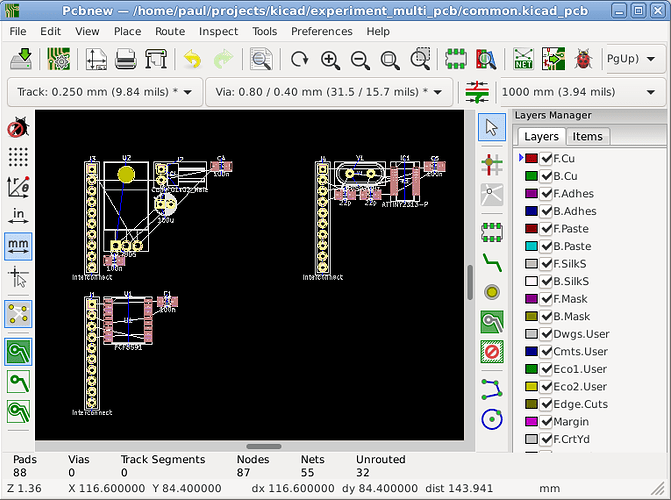 For this project this is clearly not what we want.
Therefore we close Pcbnew without saving, and we also exit Eeschama, but we leave the project manager open.
Then, in the Project manager, we select the power supply project: 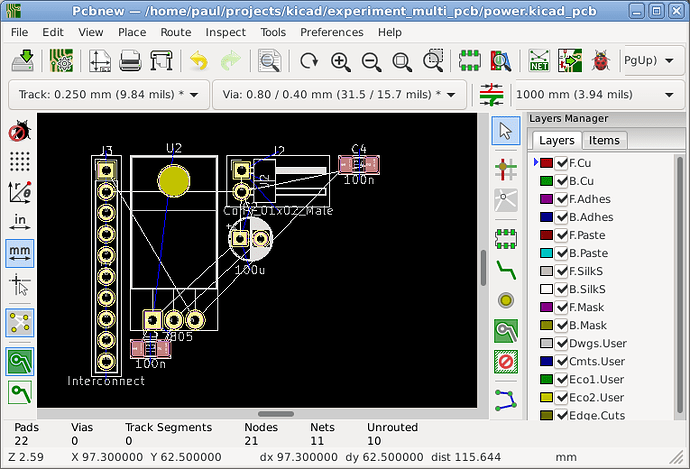 This time, only the components of the power supply schematic are imported, which is exactly what we want.

For multi board designs, you often want to use the exact same board size, mounting holes and connector layout for all the boards, or you may want to have a template as a starting point, and edit it in the final design.

So now we make a 5th project, called “board_template”. It’s schematic is pretty simple. Just the connector and 4 mounting holes: 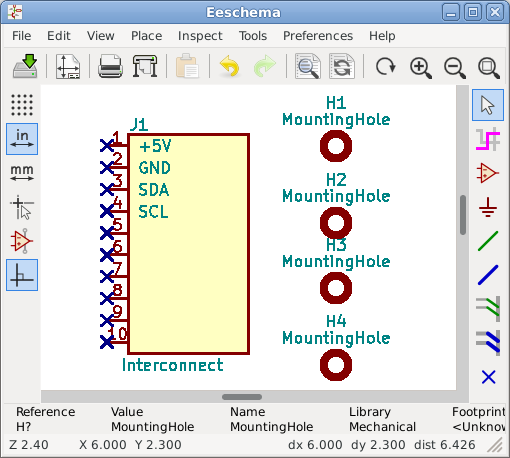 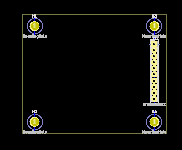 It very likely is a good Idea to lock all the parts (& board outline?) now, but I forgot this step…
Then save and quit Pcbnew.

Next step is to import the new board template in the “power” schematic.
This is done with Pcbnew in “Stand alone mode”. Pcbnew is in "Stand Alone mode if it is opened from the command line, or directly from the start menu of your OS, and then:

Pcbnew / File / Open
… Browse to the “power” project and open it.
Set the Grid to 5mm, just to make all boards more conform.
Pcbnew / File / Append board.
Insert the template board. To keep later modifications easier, it may be a good idea to put the template on all the sub projects in the same location, and that is why we set the grid to 5mm. As insertion point I moved the mouse to ( 0, 0), which is 10mm outside the left top of the page. Coordinates and grids may get confusing when switching between imperial (for lots of 0.1" holes) and metric (Hey, I live in Europe). Another reason for logical coordinates, is as preparation for revisons. It should be able to simply delete the board outline (with holes & connectors) from the sub-projects, and re-import them from the (modified / updated) template).

Save the imported template in the power.kicad_pcb, and exit the stand alone version of Pcbnew.
In the Project Manager, double click on the “power” project to make it active and look at the results. The board outline, mounting holes and connectors are all there.
Nothing else is in the board, because I had not saved it before.

There are some differences between the schematic, and the freshly imported template PCB. The connector on the template has RefDes J1, while on the schematic it has refdes J3. (The schematic also has no mounting holes, but one step at a time).

Open the schematic and press [F8]. By default it wants to remove the mounting holes, and the connector, and replace the connector with another one: 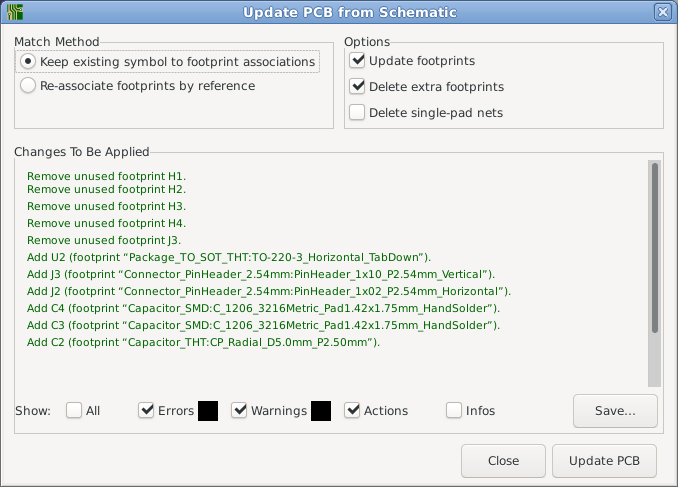 This is not what we want.
1). Uncheck “Delete extra footprints”.
2). Select: “Re-associate footprints by reference” 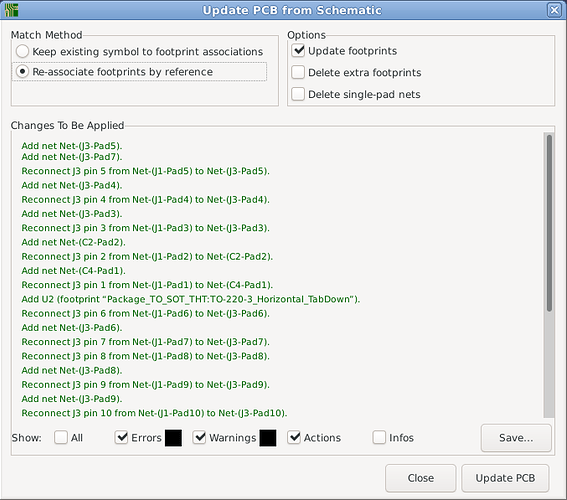 Clicking “update PCB” and “Close” attaches the new components to the cursor. J3 is not part of the new import, because now the connector from the template is used. After a bit of cleanup it’s clear from the Ratsnest that the connector is accepted as part of the design, and this is a good point to save the board. 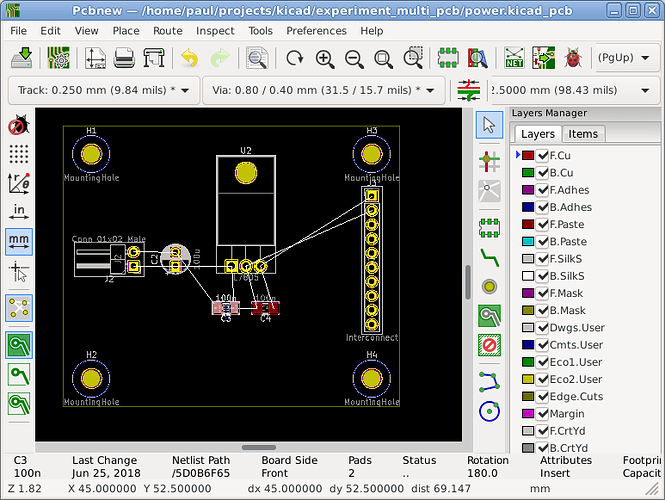 When designing a PCB, I often go through a lot of small iterations and go back and forth between schematic and PCB.
As a “revision” I add an extra 100nF capactior to the schematic, and then press [F8] again. First it doest the annotation (Oops, it’s called C1), and upon updating the PCB almost all the nets get “Reconnected”, but I pressed “OK” nonetheless, and all looks OK.

For a real project it’s easier to keep components separated by giving them RefDes numbers which are far apart. For example, everything on the “power” board starts with 100+. But those are just details.

When you forget to switch back from a “sub-project” to the “common” project, you may create duplicate symbols during ReDes assignment, but it’s easy to fix, and it’s just another good reason to keep the number 100 or so apart.
It’s also a limitation. All the RefDes must be unique across the whole project.

As said before, please post Idea’s, suggestions questions and discussions in:
https://forum.kicad.info/t/multi-pcb-project-discussion/17658

That’s it for today, but this thread will probably be edited and updated later.

2 Likes
Multi PCB Project, Discussion
Copy something from a schematic to another
Set up a project with more than one PCB
Noob: How to delete a wire on the PCB?
RFC - KiCad Blueprints
One circuit on multiple boards
Hierachical design with multiple PCBs
Hierarchical Schematic Question
Power not propagated across connectors
How to make a partial layout?
Hierarchical schematics
Discussion about the new project view layout
Is there a way could split a schematic into different pcb?
Rene_Poschl June 20, 2019, 2:29pm #2

I doubt this will play nice with symbol rescue so you will need to have such a project under version control and roll back as soon as you get the rescue dialog and rescue inside the sub projects first. (I even doubt it will be foolproof that way but hey you try to do stuff kicad is not intented to do so it is on you if it destroys your work.)

I would probably use a reverse approach:
“Resque” the whole project in one go, and then add the resque library as a project specific library to the sub projects.

The whole resque thing is a temporary hack in V5 and will be removed in KiCad V6 anyway. It might be worth it to think a bit more about this for the way project dependent libraries get implemented in V6.

The whole resque thing is a temporary hack in V5 and will be removed in KiCad V6 anyway.

It won’t go away because it is still required to load pre-V6 projects in v6. Only projects created in v6 or later will not need to be “rescued”.

But the rescue thing can certainly be easily improved a lot.
For example by just being able to give a file name in which the symbols have to be “rescued”. Especially if a bproject already has a project specific library.