I have been developing and maintaining commercial project in KiCad since 2016 and due to recent shortages in parts and some other parallel development we decided that the next iteration of the project will be split into the several PCB. I still want to retain the capability to have all of the daughter PCBs on the same master project. I know that the KiCad does not natively support this but let me try to explain my plan here and I’d like to have your input. Thanks in advance
I am aware that there are several topics covering basically the same problem that I have and I will list them on the bottom of this post.

The project consists out of 3 PCBs:

These 3 PCBs schematics are spread over 8 or 9 schematic pages but Radio PCB and Battery PCB are kept on a separate page.

This is my strategy:

This is my main project page: 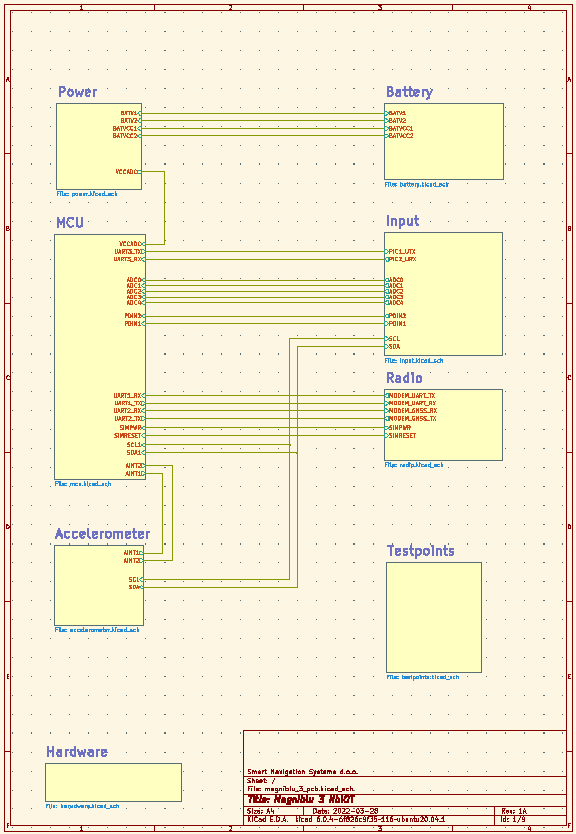 Forum link with inspiration for this:

I have not done much with KiCad V6 yet, but I think this workflow is broken now.

Quite a shame because i quite liked this workflow.

Thanks for warning me about this. I tried to create separate projects in V6 (forgot to mention version in my original post) and it seems to open schematic just fine. I’ll try to create pcb and place result here.

As the author of one of those references, and notwithstanding paulvdh's keen warning, this sounds reasonable. From memory, two of the major drawbacks with this workflow are:

Your “numbering all components with page prefixes” strategy is a great way of mitigating (1) and will allow all import automated (or at least mindless) deletion and checks. (2) can be mitigated with zero ohm links or the like, but you may have better ideas.

Just to close the topic. I’ve come close to completing the project(s) as described in my original post and it seems to be working quite well. Apart of the obvious lack of support for multiple boards like in Altium this works good enough for simpler projects. There are several annoyances though:

I’m maybe 3 or 4 hours away of producing gerbers and sending them for review so let’s hope.

If there are things missing or unclear in the manual chapter on custom design rules (PCB Editor | 6.0 | English | Documentation | KiCad) that would be helpful, please open issues in the docs repository so we can make the documentation better.

I just found out that there are examples under the Board Setup → Custom Rules and it’s pretty easy to get it going. Finally I don’t need to have weird workarounds for design rules… 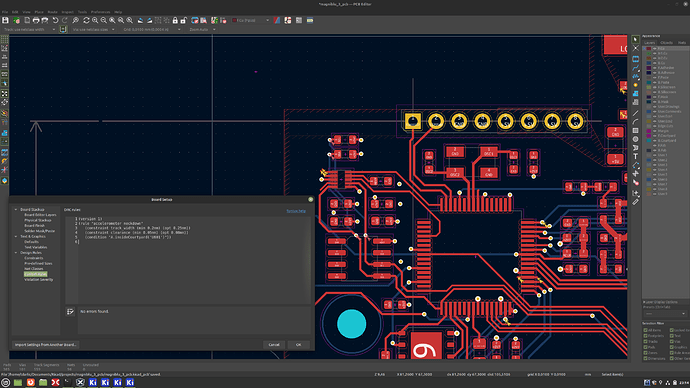 This is my multi-board workflow: KiKit/multiboard.md at master · yaqwsx/KiKit · GitHub

Hi,
that is definitely a nice way to do it.

Just specify a higher “tolerance” parameter in the source section, and your zones will be included.

By the way, is there a list of the parameters somewhere ?

Of course, just open the documentation:

Thanks, I wasn’t looking at the proper documentation page.
I also needed the stack parameter. All good now.

I’ve read trough the instructions and it seems better than my approach as it shows the connectors all on one place and you can make sure that all are properly connected. This is something I am missing in my approach as I had to return back and fix several issues with connectors before sending the gerbers. In addition, showing all PCBs on one page has some advantages. Not sure how would this play with the different versions of the same PCB as I have now. And the 3D visualization might give me some headache.
I am considering changing my schematic in the next version to this approach and seeing is this viable.
The only thing I am not sure about is the KiKit addon. At this time I am quite positive that KiCad will open any of my old projects without any problems. I am not sure whether the KiKit would play nicely if I had to get back to old project after several years.
And, also, need to learn KiKit now…

If you open an old project with the current kicad, it will be brought to the new file format of the current Kicad.
So I don’t see why the plug in would not work.
I’ve actually tested it with project that I’ve started on Kicad 5.1, and continued on different version up to Kicad 6.0.5.
The main issue with the addon (as it’s the case with all the addon), is that they will still continue to work after an update of kicad. But Kikit is actively developed, so if there was an issue, it’s likely that it would be fixed.

For me I’ve created a script in a “dos” box to split my board in the PCB that are in the project, and also to convert 2 of them into 2 layers board (the third one is a 4 layer).
I still need to investigate the best way to “pass on” a version number for the PCB that I cna write in the silkscreen. I was using a text variable in the project. But the text variable does not propagate to the individual board.

on my project, I’ve got 2 boards in the same file, then I use Kikit to split them.
But I also use some project variable. Actually only one for the revision number of the board.

is there a way to copy the Project Text variable from the main board .kicad_pro into the daughter .kica_pro file that are created after the kikit separate command ?

This is implemented in the upstream version, it will be a part of the upcoming v1.1 release.