As you may have seen in another post I have been advised to have a play with an Arduino project template, however I’m having issues creating a new project from template, I can browse to the templates but all of the files are greyed out and if I select the project director and proceed I get an error “No project template was selected. Cannot generate new project.” See attached images for what I see on the templates dialog and when I browse to templates. 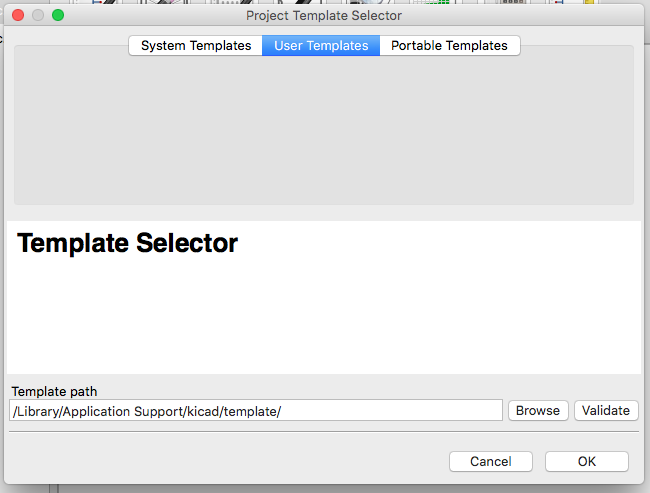 This is the template directory. 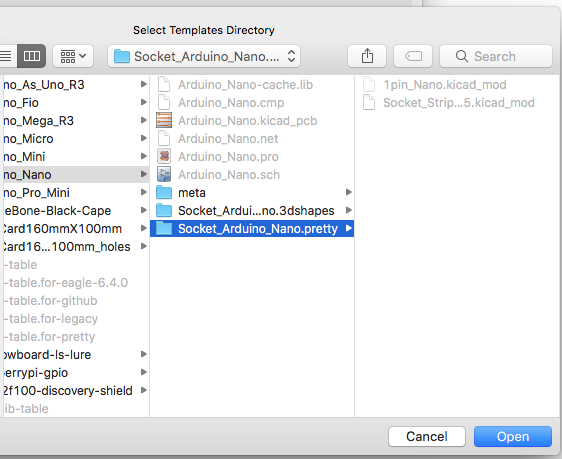 You don’t mention the version of KiCad that you are using but earlier versions on macOS had problems with templates. This is now fixed in recent versions and certainly works as expected in 5.1.9. Also, the current 5.1.9 version only has tabs for “System” or “User” templates. My first guess would be that you might need to update. 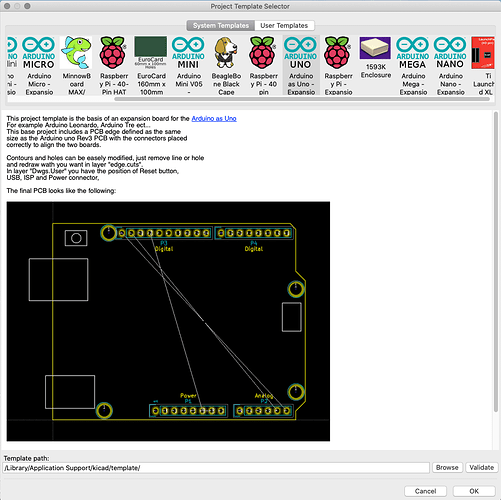 Ah that might be problematic, I’m using 4.0.7 as my Mac is on High Sierra and the newer versions are no longer compatible.

KiCad V4 is real old now. I’m not into that apple stuff (they don’t get no capital A from me). I have seen that “High Sierra” several times on this forum, and from what I remember there may be some trouble with installing, but people have manged to get newer KiCad version running on it.
For example a simple search like:
https://forum.kicad.info/search?q=High%20Sierra%20order%3Alatest_topic
brings up posts like:

I went to do an update (as it’s been a while), currently running 5.1.0 on a mac pro running Mac OSX 10.12 (latest supported version for my hardware). After looking around I realized that pre-10.14 macs have been dropped. I don’t remember any issues relating to the 5.1.0 install, but I do see the -10_14 and non-10_14 builds as illustrated in this snapshot: [kicadmacosreq] It appears 5.1.6 is the last version having a non-10_14 build. Just wanted to verify that this is a hard stop on using a…

On the top of your project selector dialog there are a few tabs:

The System Templates are the examples that John shows in his screenshot. Sometimes these templates are not installed by default and have to be installed as a separate package. I don’t know about KiCad V4 though.

The User Templates are for templates you make yourself. If you have not made templates, then there simply are none!

I don’t know about those Portable Templates I can not recall having seen those before.

macOS High Sierra is (as you identified) is unfortunately no longer supported by the mainstream builds. Helpfully, some users have managed to compile more recent versions, although they are officially unsupported. It might be worth exploring this trail for some more up to date versions on High Sierra.