I just released first beta for my plugin. I find it super handy for building prototypes.

Instead of describing what it does and how is it different from all the other BOM plugins I better show a nice demo.

And here is the github repo.

Try it out and let me know if you find it useful. If you find bugs please report them, if you would like to see some features discuss below. 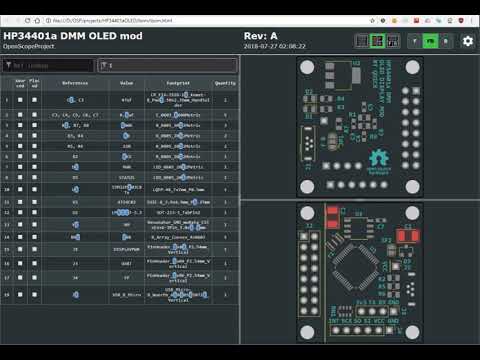 47 Likes
Components List in PCBnew
Interacitve HTML BOM (Under linux)
Hotkey for "Flip Board" would be very appreciated
Kicad on tablet and external SSD over WLAN
KICAD PDF Copy is not searchable
Loading backup pcb files
Interactive bom is available in Kicad 5.1?
Index post for External Plugins section
Export Step-File with part reference
How to install Kicad without network connection in Ubuntu 18.04?
How to create a bill of materials (BOM)?
Making a good assembly drawing for hand soldering out of the KiCAD PCBNew
Populating my PCB
Assembly drawing layer
Does KiCAD have the features I use in Altium?
Does KiCAD have the features I use in Altium?
KiCommand discussion and development - Easy pcbnew command line; 4.07 & 5.1.5/.6
Indexing is OPEN for Business
s_light July 25, 2018, 12:20pm #2

wow the demo is awesome!
i will have to try this at the next project!

very nice though!
I also really like the new toolbar button added!

PS a feature request:
add the Front or Back property on the Materials List…

I’m tried with my project, generate ibom.html is perfectly worked.

This is very respectable jobs, thanks.

ok- i think i have to wait until the problem with linux and python is fixed in 5.1 …
currently on ubuntu with the kicad 5.0 stable or nightly it just crashes pcbnew directly…

how heavly are you using the kicad python api?
would it be possible to run the script stand alone to generate the file?
(i think the answer is no…)

maui
I see what you are saying, yes being able to quickly filter out only on one side is useful. I dont want to split bom table row but maybe I will add a filter checkbox to show only front or back components.

s_light
Sorry, I didnt really test it on linux. I will try to test ubuntu vm soon.
You can run the script standalone. It just has to use same python interpreter that kicad uses. Just run this in terminal:
path/to/kicad/python path/to/generate_interactive_bom.py path/to/board.kicad_pcb

At least that works in windows, I will test in linux soon.

I will test in linux soon.

The issue should be only related to the fact that kicad v500 doesn’t have Action Scipting enabled… It is related to a Linux incompatibility between py2.7 and the actual py3 distribution of GTK2 if I remember correctly.

Just for info, i have just tried this out on two recent nightly installations running on MacOS Sierra and it works perfectly. I am impressed!

an other possible improvement/suggestion, if I can, is the following:
if you filter i.e. a single resistor in the list, only the single resistor should be highlighted in the board.

BTW I’ve learned how to add a tool button i.e. to my Annular checker script

Ok, python developers… is there a way an end user could disable the toolbar button for installed scripts and only use the menu? I fear toolbars getting over crowded with icons…

It is related to a Linux incompatibility between py2.7 and the actual py3 distribution of GTK2 if I remember correctly.

It is because some (most) linux distros do no longer supply wxpython compiled against gtk2 but only against gtk3. This breaks every part of the python interface that needs wx support. (If i remember correctly then action plugins should run as long as they do not by them selves need wx stuff. The python console and the footprint wizard does not work however. But i could have it backwards here)

John_Pateman
Thanks for the report. I was worried about MacOS the most, I don’t have an easy way to test it either.

maui
You absolutely can. Your work on KiCad stepup and 3d model support is what partly inspired me. Let me take a chance to thank you for that

Regarding highlighting particular component, I’ve thought about that before and issue is not quite straightforward. I’ve caught myself frequently using filter box to do two different things, find reference (which is what you are asking for) and find group containing reference (which is what the behavior currently is). Since I can do the former in Pcbnew easily I opted to implement the latter in plugin. I think one input field is just not enough to capture the intent, I will probably add another “reference lookup” input.

SembazuruCDE
Buttons in plugins are not officially supported, I kind of rammed it in with a hack. If/when KiCad officially supports buttons hopefully they will add tools to selectively disable buttons from some plugins too. I will advocate for that on dev mailing list.

Rene_Poschl
Main plugin code does not depend on wx at all, it only needs pcbnew.py and _pcbnew.pyd in python classpath. That gives me hope that running it from command line should work with no issues.

Buttons in plugins are not officially supported, I kind of rammed it in with a hack. If/when KiCad officially supports buttons hopefully they will add tools to selectively disable buttons from some plugins too. I will advocate for that on dev mailing list.

Well, given the published reports of Wayne’s (at least original) attitude about Python scripting only being ok if it doesn’t cause undue effort for the other devs, I’ll not poke the bear. I’ll let you handle that on the dev list.

I just submitted the first issue on GitHub for this plugin: https://github.com/openscopeproject/InteractiveHtmlBom/issues/1

The issue is spaces in the path for the KiCad project folder.

Update: For the peanut gallery, the error was with windows trying to open the resulting local web page. The BOM web page was generated correctly.

I’ll try to work with him. Looks comfortable and informative!

Just checked on Ubuntu. Plugin indeed crashes Pcbnew, won’t even launch in standalone mode if it is installed. You can still run it from terminal though. 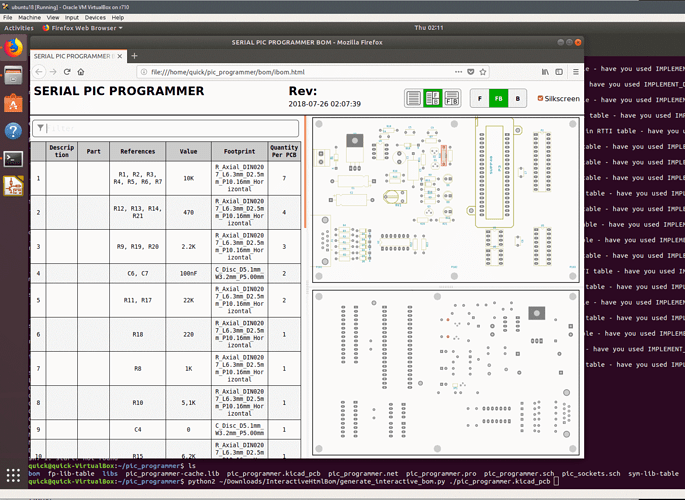 I will update instructions on github for linux users.

I think one input field is just not enough to capture the intent, I will probably add another “reference lookup” input.

Perhaps you could add a couple of radio buttons next to or under the filter box to select the type of filtering?

Isn’t an input box and a radio button more clutter than 2 input boxes?
They will have different semantics too. Filter searches all fields and does substring matching, ref lookup will only look for exact reference match so that it doesn’t match “R3” with R30-R39. I think switching that with toggle will be less intuitive.

This thing looks freaking awesome, thanks for sharing! Can’t wait to try it; I have a board to hand-solder next week

Wow this is great, the demo looks really promising. Sorry if you have already answered this somewhere but I couldn’t find it; what happens with custom fields? I add the MPN to every component so I’d love to see that in the BOM list as well so I know which bag to grab. Awesome work!