Hi guys, this is my first post here. I have been using Altium Designer for many years and wanted to give Kicad a try. I wanted to execute an entire project here to see the overall experience.

I must say, I am more than impressed with Kicad and plan to use it a lot more. Kudos to all the people who have worked so hard on it. See my first project on Kicad for a Vending Machine controller below and let me know what you think…

Looks professional, although I’m not very competent to judge. It would be interesting to hear what you think are strenghts and weaknesses of KiCad, as you have used another EDA.

Looks good to me!

That’s not C9. I can’t see the Ref’d, but it appears to be the buzzer.

… I have been using Altium Designer … must say, I am more than impressed with Kicad …and let me know what you think…

Welcome To The Club …

Othen than, as already suggested to adjust the alignment of some component texts, well done.

I’ll be honest. It was a little different using Kicad, but then I was expecting to have a different experience. Once I was a few hours into the project the tool simply disappeared and I could focus on building the PCB, which is a good thing and goes to show how well Kicad is designed. I don’t think there was anything I couldn’t do with Kicad that I could do with Altium.

These are some top observations / comments:

And see that’s the beauty of it… I can’t really point to anything in Altium that I can’t do in Kicad. And Kicad is open source, has a wonderful community like you guys, and I can contribute to improve the product.

One thing I don’t like about Altium is their bug fixing policy. They only fix bugs in future releases, so you need to keep buying their licenses to get bugs fixed in your current version… this reason alone is enough for me to move to Kicad…

Sprig, I prefer that my silk screen refs don’t overlap my Vias. Sometimes when the reference is getting too far from the component, I would rather rotate it sideways. And the buzzer was a readymade 3D model, which I could have clipped… in Freecad.

Not mandatory. Exporting the netlist is optional.

Is there a way in Kicad 5.14 to see nets of a component I am moving?

I don’t know if you mean the ratsnest or the net names. For ratsnest there is a buton on the left side toolbar.

One thing I don’t like about Altium is their bug fixing policy. They only fix bugs in future releases, so you need to keep buying their licenses to get bugs fixed in your current version… this reason alone is enough for me to move to Kicad…

We have bought Protel 3 some about 1997. It was the very expensive tool for us (small firm in Poland). The distributor said no word that in few months there will be next version with push routing. We said: “You are not fair”. They said: “As an exception we can give you 10% discount for the next version”.
I am now swithcing from that old Protel 3 to KiCad mainly because I sow the demo of push routing.
What lacks me in KiCad 5.1 is that I can’t define colour of connection lines for separate nets and simple hide GND lines. When I need round tracks (winding at PCB, or RFID antenna) simpler for me is just to use my old Protel then to learn how to made user defined pads or may be how to use the plugins and find the right one.

in 10 days, including my learning curve of Kicad

I am impressed. I have started to be interested in KiCad about 2 years ago (4.0.6 was current). First I have read all documentation pdfs. Then I checked if I will be able to easy (means directly and no going through gerbers) make documentation as I wont it (one picture with references and one with values on the light gray cooper - there is no place for both texts if you have a matrix of 0603 elements one next to another and such regions happens in my PCBs). I found that to do it I have to modify all footprints - it is no problem as I always used only myself defined footprints. After half year (4.0.7) I have done first (in some way test) PCB. During it I got into some problems with via-stitching (already solved in V5). Then generating SVGs I was surprised with bugs in colors not as I selected (not detected by me previously). I decided to wait for V5. In V5 the colour problems were solved but not fully. I reported a bug and in some time it was corrected. Then I started to define my footprints. Month ago I have done my first serious KiCad PCB (about 10:00 am decision to do it - starting from schematic - at 11:00 pm files send to PCB manufacturer).
If anyone understand that I am complaining on KiCad he is in error. I am very impressed what a great tool was done by developers.

Thanks for sharing this MitjaN. Will explore it.

I don’t know if you mean the ratsnest or the net names. For ratsnest there is a buton on the left side toolbar.

I mean ratsnest. In the 5.14 version you can do these two things:

I can’t find a tool to ‘show ratsnest of component I move’ (basically show the ratsnest of the component if I move the component and then hide it if I leave the mouse). I have seen such a tool mentioned in the past releases, but can’t find it in the current release. Am I missing something?

Option 2 works also while moving the footprint but it is quite tricky: I never remember if I have to press the Display Local Ratsnest button before of after I have pressed M.

I agree the feature was implemented in a better way in the past, at least in the legacy canvas.

Just got the PCBs from the Fabricator for this project. They look Great!!! Thank you KiCad.

It is a simple 2 layer board… 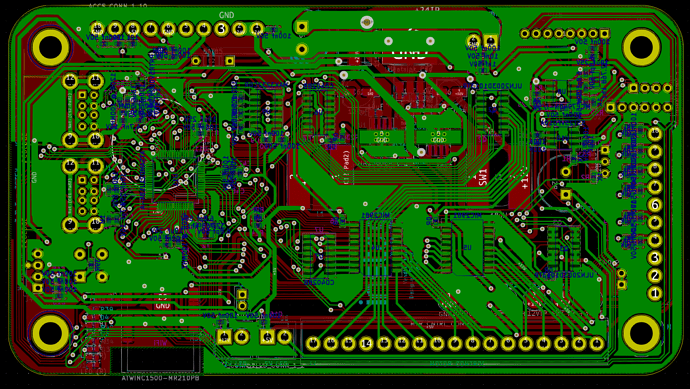 Nice! May all your solder joint be good