Or do you mean trademark instead of copyright (which wouldn’t apply)?

Well… copyright law is a muddy area. Also, the law is not harmonized between countries.
In most cases, if someone designed graphics symbols that have traits of author’s individual approach then it’s considered Works and is automatically protected by the copyright law.

Now to the symbols. Generic symbols themselves are not protected by copyright because wel… they’re generic and fit for purpose. But if particular implemenetation of the common symbol is unique in some way for it’s viewer; then this uniqueness may be in the copyright area.
And even if the original shape is not “photocopied”, but the derivative carries these unique touches then it may violate copyright of the original author.
And the last thing any open source community wants, is to be engaged in lawsuits which are very resource consuming. So: if in doubt, avoid - is the most efficient strategy.
Kicad went through this with the old iconset which is being replaced with icons with traceable licensing scheme.
In case of Elektuur symbols: if they’re carrying individual touches, and their licensing is unknown, best to avoid them in KiCad official release.
And YES, I agree they make the schematic look much nicer than with plain generic boring symbols.

@fred4u, thanks for your comments.

In case of Elektuur symbols: if they’re carrying individual touches, and their licensing is unknown, best to avoid them in KiCad official release.

I guess a schematic or a substantial part of it is copyright protected but I don’t think a redrawn collection of symbols would be (I’m referring to the many Helvetica or Times look-alike fonts that exist).

If you look at European tube and early transistor schematics from the 1960s then you might find that style not that uncommon (thicker envelopes and metric sizes), and it actually looks more like Elektuur started using similar symbols like some manufacturers’ application notes, repair schematics or handbooks did (except maybe for the Zener diode but there is also an alternative symbol).

I’m clear that they cannot be part of KiCad’s official release because of the KiCad-specific library rules (KLC) but I would guess it should be possible as 3rd party library?

That all depends on the level of author’s individuality involved, and this can lead to long and exhausing legal battle shall anyone want to hurt the project (think malicious scenario: an evil PCB software company buying copyright rights to original work and then suing the a$$ off KiCad just to shut the project down).

If you own copyright to your works depends on many aspects, most prominent the way it was created. If you redrawn existing designs (like overlay drawing), then it’s questinable.

Oh, how we love copyright and licensing problems.

I would believe that the symbols were made to be used and if there were no specific restrictions mentioned, it was self-evident that anyone could use them. Especially because back then they usually weren’t in computer files. Nobody would have thought they would need to be specifically licensed to be used in schematics. But it’s true this is only one interpretation and not 100.00% safe to assume. Still, I would say that the chance of running into problems for redistributing these as KiCad library files is near 0.0%. Probably including these in the official libraries will not happen but a 3rd party library is great. I don’t see any reason why this couldn’t be included in the official 3rd party PCM list. The list (which is the official PCM “repository”) itself can’t violate copyrights in any meaningful way, the worst which could theoretically happen is that the library should be taken off from the list.

(I’m referring to the many Helvetica or Times look-alike fonts that exist).

In my opinion this is a good comparison, probably even legally. You haven’t copied the symbols exactly, only followed their outlines. It’s legally OK to do that for fonts.

On the other hand, because the magazine still exists, have you thought about asking them directly? One short “nice job” comment in a discussion doesn’t yet tell if anyone has actually thought about it deeply, especially someone who has something to do with the original designs or copyrights. But there might be someone who knows something.

Fonts are a good example as even though the alphabet has limited options on style, the dimensions of a symbol cannot be just copied and just given a new name to dodge copyright. There have been a few legal cases.

I would appreciate it if you could expand on alleged copyright infringement.

Hi @franzee, neither @davidsrsb nor I alleged anything. I approved of his comment to “check copyright”, assuming he meant “check for copyright”, after all, as others have commented: who wants to get caught up with that can of worms?

Technically, the symbols (definitions, meta data) are derived (and adapted to look like old Elektuur symbols) from my Generic symbols that are converted from my SPICE symbols, which in turn are derived from the IECsymbols for LTspice, which were generated from SVG symbols (also in the public domain), mostly following international standards.

The symbols are designed using 0.18mm (7mil), 0.25mm (10mil), 0.35mm (14mil) and 0.5mm (20mil) strokes, which were the standard pen (diameter) sizes at the time. Since stencils were used, the bounding boxes of shapes were the defining factor (e.g. a circle would have an outside diameter of 2mm, and with a 0.25mm pen the inside diameter would be 1.50mm). This is different from international standards; they define the stroke center line, independent of any stroke width.

Most is geometrically constructed from the diode symbol, which is 4mm×4mm square (the original is slightly rectangular, I think) with a 4mm×1mm semiconductor region (and therefore the triangle is not equilateral with 60°), drawn with the 0.25mm pen, like the wires. The capacitor uses the same 4mm×1mm rectangle; the unfilled positive pole drawn with a 0.35mm pen and overdrawn with a 0.25mm pen to get sharper outside corners (again assuming using a standard stencil). Envelopes are 0.5mm, in the case of BJTs with 7mm outside diameter. Non-flow arrows are done with the 0.18mm pen to get a pointier tip.

These symbols were not scanned or copied but actually independently coded (for example, the rectangles used cannot be drawn with the KiCad 5 GUI) and are defined by strokes and not outlines (which is common now).

The symbols can now be installed on KiCad 6 with Tools → Plugin and Content Manager
thanks to the PCM developers and maintainers.

To add the library after installing, use Preferences → Manage Symbol Libraries…
followed by Add empty row to table (the + icon) with the following Library Path:

The libraries and demos are as well in the repository for local installation.

Version 0.6.2 is now available via PCM and also from the repository directly (please see the first post of this thread).

To use the corresponding small demo project (same circuit as mentioned above from the Elektor TV video for LTspice but using ngspice):

To use (already installed 64-bit) LTspice instead of ngspice, replace above:

I know this is an old post, but… this depends strongly on where you are. In some places, it’s 100% not true.

First attempt at rounded octagonal pads (radius ratio is currently 25%, same like the 130 mil terminal pads were, but it almost looks like the 100 mil and 160 mil component/terminal pads weren’t actually rounded other than because of the processes then): 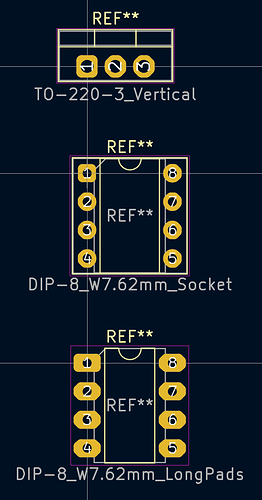 just loaded this library , boy thats brings me back, I think my last subscription to elektor was anout 15 years ago , nice , now just need a circuit with 20 transistors!!

The image above is from a single generated test footprint (but you should be able to copy pads and resize with context menu Properties… → Custom Shape Primitives → Polygon → Transform Primitive → Scaling factor and adjust Size X and Hole size X in General):
octagons.kicad_mod (27.1 KB)

For more footprints, see also the 2nd part of this posting:

Continuing the discussion from Elektuur Style Symbol Library. Oktizer Oktizer is an Action Plugin to create octagonal looking pads and vias. It works somewhat similar to how KiCad 6.99 is currently doing teardrops but it also modifies pads. Currently, there is no GUI (edit the python file to change corner rounding or chamfer ratio) and it needs to be copied to the plugins folder of KiCad 5.1 or KiCad 6.0 (it doesn’t need its own folder, though), or it can be installed using PCM on KiCad 6.0. …

I’m in Italy, that remembers me the old times at school

and by the way, by that time Elektor was published in Italian as well

Updates and supersessions to first and following postings continued here:

Continuing the discussion from Elektuur Style Symbol Library. Oktizer Oktizer is an Action Plugin to create octagonal looking pads and vias. It works somewhat similar to how KiCad 6.99 is currently doing teardrops but it also modifies pads. Currently, there is no GUI (edit the python file to change corner rounding or chamfer ratio) and it needs to be copied to the plugins folder of KiCad 5.1 or KiCad 6.0 (it doesn’t need its own folder, though), or it can be installed using PCM on KiCad 6.0. …