I am having the same issue as described here. The solution described in that thread was to go to Preferences > General Options > Editing tab > Automatically place symbol fields.

This would be simple enough if my preferences dropdown menu had something called “General Options”. However it does not, see included image. 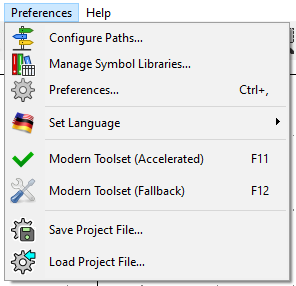 I have spent an incredibly infuriating 20 minutes trying to find this menu or parameter to no avail.

go to ‘preferences’ in the click down preferences menu shown in your image then click on’Eeschema and it is the first option in the bottom section. 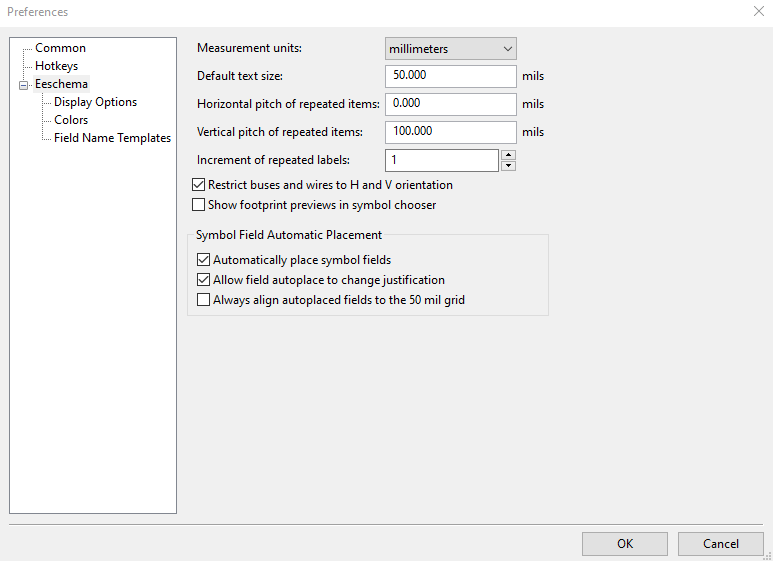 Ah thank you! I thought I had gone all through this menu but thought that “Eschema” was only a heading for those 3 subcategories and didn’t notice it had settings of its own when clicked.

I do really wish they wouldn’t move things around and change names like that between versions, it has made picking up this software extremely frustrating at multiple times now.

This is a usability problem in v5.1: many users have been fooled by the top level tree items which can instinctively be taken as empty, but they are actually pages. In 5.99 this has been fixed and clicking a top level items leads to its first child page.

I do really wish they wouldn’t move things around and change names like that between versions, it has made picking up this software extremely frustrating at multiple times now.

You have to tolerate that still for v6 when it’s released. But then the major changes to the preferences structures have probably been made and moving to v7 will be easier in that respect.

Being a relatively new user to Kicad (September last year) finding settings in the menus was one of the most challenging parts of of the transition. Once I had decided I was going to start using Kicad full time I spent a while going through all the menus and trying to work out what each setting did. This helped a lot in the use of Kicad and saved many hours of troubleshooting as I already had an idea of where the settings were.
I picked Kicad up very quickly (despite the interface) but this could be down to the 20+ years of pcb design experience, I imagine to a hobbyist starting out it would be daunting.

Without change there can’t be progress.

Attempting to only extend KiCad without refactoring existing menu’s would lead to an chaotic mess.

I’ve used KiCad V4, V5 and now V5.99 (to become V6) and also switched from the old canvas / toolset to the new. And the improvements last while the effort needed to adapt fades away in history.

I liked the old XOR colors but those were not supported by OpenGL, but I got used to it and the interactive router that came with the change was well forth it.

Still getting used to the new icons though, that will take some time.