Not sure if I follow it or/and I dont know how that softwares works… but you can already export the layers (i.e: plotting) with kicad… maybe you need some external program (eg: inkscape and/or the gimp) to export to a image.

adding the ability in kicad to export top and bottom layers not only in vector format but also in bitmapped (png) would be nice!
and also let this feature visible to python…

(in FreeCAD it doesn’t matter much for modules programming, everything you can do in c++ you can also do in python)

My point was that I am hoping that all this will be done with a single click.

Hi @jwr,
I just updated my kicad StepUp tools… I moved all the code to FreeCAD because of its powerful APIs…
Now it is possible to open a ‘.kicad_pcb’ board or a ‘.kicad_mod’ footprint with just one click…
(obviously the MCAD lib is a requirement)

the config file is in ‘.ini’ format and it is more readable
hoping that would keep the ECAD MCAD collaboration easier

That is mightily impressive! Thanks for your wonderful work. I will be trying this out soon!

I ran into the same trouble that the pcb was visible but none of the components. So I looked at the .wrl file and it looks like the components are not correctly listed. KiCAD basically takes the file name in the “VRML export options” adds the “Footprint 3D model path” below as a new dirrectory and tries to find the .wrl files of the components there. I tested it first by manually changing the filename in the .wrl file of exported pcb and the component was there as you can see in the pictures. The lines can be found easily in the .wrl file like in the example for the TSSOP package:
Transform {
translation 0.143002 -0.10541 0.0008
scale 0.00254 0.00254 0.00254
children [
Inline {
url "J:/VMmachines/Elektronik W7/Daten/Spritzguss/Maschine/KiCAD/shapes3D/TSSOP-16_4.4x5mm_Pitch0.65mm.wrl"
} ]
}

The easiest way certainly is to simply put all used packages as .wrl files in the directory given by the export path plus the “Footprint 3D model path” in the VRML export options. 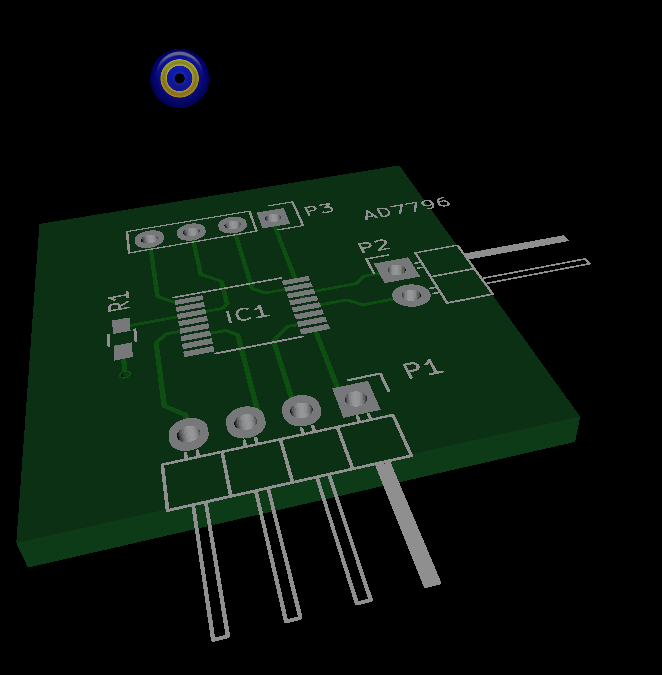 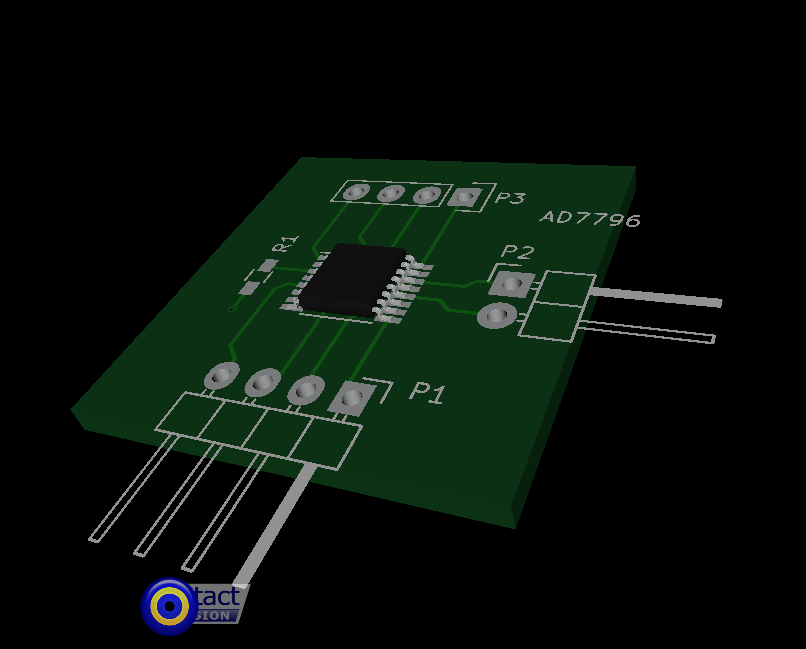 it seems to me you are talking of VRML exported from kicad, aren’t you?
from the Menu
File
Export
VRML
if that is the case, this doesn’t have anything to do with the kicad StepUp MCAD exporter
Just check your exporter options 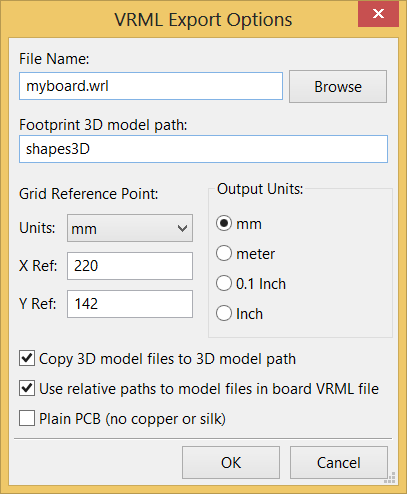 this is the easiest way. I also found it out after I had published my long story.

As a beginner in 3D design, I’m looking for a companion tool next to Kicad to work out the mechnical parts of my design. I see a lot of references to FreeCAD, but also found the BRL-CAD package (brlcad.org) which seems to be a mature set of 3D tooling. Has anyone experience with the latter? How does it compare to FreeCAD from a user experience perspective, learning curve etc.

Hi @zutje,
when I had to work with 3D mechanical objects I chose FreeCAD for the following reasons:

I looked also to BRL-CAD but when I tested it, importing STEP models were quite limited/partial supported
http://brlcad.org/w/index.php?title=STEP

currently the tool step-g has partial support, and the toolkit https://github.com/stepcode/stepcode is branched into the src/other source tree.

I don’t know if they have improved it but I re-checked quite recently with the same feeling…
FreeCAD learning curve is quite long, as in fact is for many MCAD sw, but FC programmers are developing new features and Workbenches to improve user experience
I recently added the ability to preserve colors to the Assembly2 WB, and that has been merged, so from now assembly parts in FC is even simpler and colorful 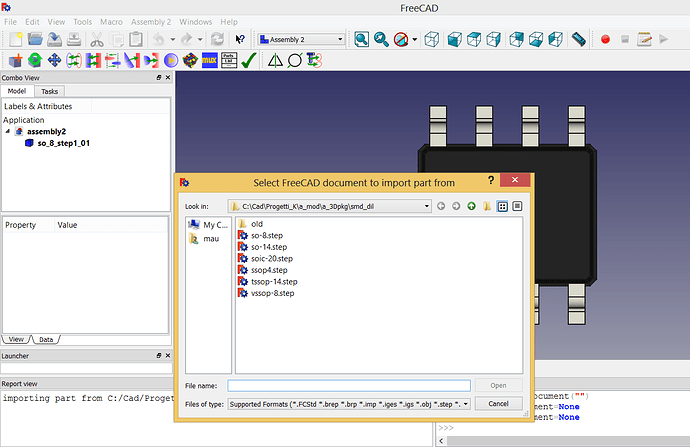 1315×852 90 KB
and moreover there is kicad StepUp that is developed under FreeCAD, which can help you in ECAD MCAD collaboration, exporting directly your board and parts to STEP

Hi, I’ve done a script to easily export pcb board and modules to MCAD STEP format with colors using kicad StepUp the easiest way is done with minimal effort from user: just add STEP models to your standard 3D packages path and run the script (detailed instructions in README.txt) kicad StepUp is a new approach to export kicad board and modules in STEP AP214 (with colors) and create the wrl library. requirements: latest kicad FreeCAD 0.15 Please consider that the project is at beta st…


and a lot of mechanical library parts here

Hi, after having completed kicad StepUp, the new 3D exporter for MCAD, I’m going to create a 3D mechanical lib to be used both for kicad internal 3d-viewer and for 3D mechanical interchange / collaboration and enclosure design. I’m organizing the library to be usable as easier as possible, just copying the DIRECTORIES and configuring the environment VARIABLE for kicad. I have just completed the DIR structure. The 3D models will be: parametric models coming from technical datasheet FreeCA…

EDIT: I forgot to mention DesignSpark Mechanical, which is free but not open source… its usability is quite easy, but it saves only in proprietary format, unless you buy an add-on license. It does import STEP with colors but doesn’t export to STEP (free version), so it is not suitable for a bi-directional use…
OnShape is free too (only on line tool), but it doesn’t manage colors in STEP files, if they are fused or if the colors are on faces, so you will lose some aesthetic but useful aspects using FreeCAD for KiCad 3D MCAD libraries or on line library models …

I’m pretty biased as I have access to Inventor and worked with other commercial tools before that.
FreeCAD does look very promising in it’s feature set and approach - the polish isn’t there yet though (1 year old comments).
But, the state of polish for KiCAD is in similar waters (not adjacent waters though).
So, if you can live with some bugs here and there and some odd behavior (if you tapped into CAD before) then I’d say go for FreeCAD - at least have it installed and take a couple of aims at getting something done with it.
I just searched youtube for some vids on the subject and there are plenty (check dates as FreeCAD is evolving on a 6 month pace, so stuff 3 years old might not be relevant today).

For comparison my E-CAD experience:
I never used Altium or OrCAD or other free Tools like DesignSpark. I did dabble with Eagle a couple of years back, but can’t remember much of it. KiCAD does what I want and I can live with it’s quirks.
I think it would be similar with FreeCAD if I haven’t have access to Inventor.

[quote=“zutje, post:48, topic:569”]
I’m looking for a companion tool next to Kicad to work out the mechnical parts of my design.
[/quote] it’s not absolutely clear if you’re talking the odd device/housing/mount or more complicated stuff like complete CNC machines or 3D printers?
If the latter I’d suggest you also take a look at free versions of professional tools like Fusion360 or Creo Elements. They will have restrictions but might be less painful to learn and more stable for complex stuff?

As for BRL CAD… the screenshots on their website or via google don’t look promising.

I always felt that BRLCAD was closer to Blender than FreeCAD.
The big attraction about FreeCAD is that apart from being truly free, there are developers actively interested in improving the linkage to KiCAD, something that is not happening with DraftSight Free etc

We know FreeCAD works, but I haven’t looked into the STEP exporter of BRLCAD; BRLCAD is a good tool, but maybe not the best tool for this task. BRLCAD also takes some getting used to since it’s not an interactive GUI tool. Other options, if you don’t mind some vendor lock-in, are OnShape and AutoCAD’s Fusion360 online. I wouldn’t be surprised if other online tools have popped up since those two.

I would say go with FreeCAD. As some others pointed out it has some issues compared to i.e Fusion360, but will work very well. It depends on the complexity of your designs. But you say that you are a beginner so I guess it is moderate for now=)
FreeCAD also have a nice 3d to step import plugin that I use. You can actually import the kicad board file directly and you can link the parts to step files in a library(and adjust placement)
https://sourceforge.net/projects/eaglepcb2freecad/ -Read the manual!!

That way you will have the 3D step model in the program and just add enclosure etc.
Many handy functions there.

And provided that there are STEP models for all of your components it will produce a single file of the whole board, which can then be opened in solidworks or your program of choice. 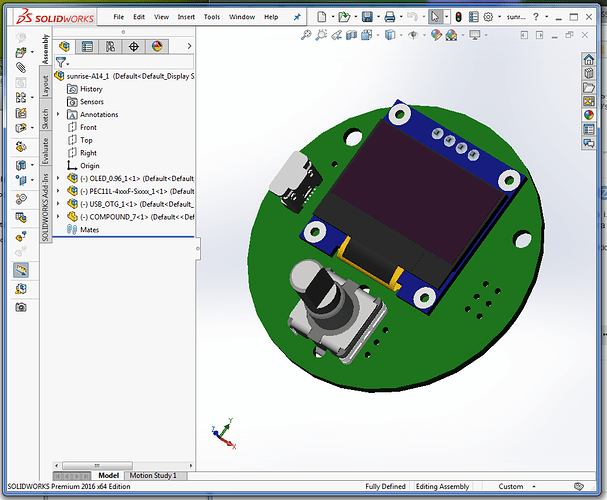 That is amazing. I can’t wait for that to be available. This would have helped me out a great deal a month or so ago.

Not so amazing just yet … is it?

Using KiCad on iMac … I do get the nice 3D models in KiCad … when I export VRML (with 3D data checked) … I can see the full 3D model of PCB with components as well in FreeCAD.

However … when I send this same data to a Solidworks user … they just see the PCB.

If anyone knows how to get the KiCad 3D model into Solidworks … I am all ears.

when I export VRML

Did you notice your mistake already? What data format are all others in this thread talking about?

tried the step file in FreeCAD … only could see the PCB

If anyone knows how to get the KiCad 3D model into Solidworks … I am all ears.

Step up not avail for iMac … but thank you kindly

Here is the big surprise … Kicad exports 3D files that easily import into Freecad and display as 3D pcb with all 3D components.