Hi,
I am running Ubuntu 18.04 in Virtualbox. I am trying to install KiCad and followed steps given here: https://kicad-pcb.org/download/ubuntu/

Solution:
Earlier there was no PPA compiled for 18.04 but there was for 20.04 that’s why it was not working and installing old KiCad.
Now KiCad team has released 18.04 compiled PPA as well so now using same commands we can get latest KiCad Installed.

I don’t use Ubuntu much. Have you tried a visual installer like Synaptic to see what is going on? I know Debian took forever to update to the 5.X but I thought even they were in the 5’s now. Sounds like you’re getting the old defaults somehow.

Also, do a purge of the old. You might also want to look in your .config directory to make sure it is completely gone before trying again because there are some gotchas that you can check out in the FAQ section about upgrading from 4 to 5.

Did you have a clean new installation of Ubuntu where you added the ppa and installed kicad? Did you have another repository activated before ppa:kicad/…?

Can you link me to that FAQ? I also tried to install via Software Center but it also shows old version there.

Yes, it was freshly installed Ubuntu only and never installed KiCad. I followed those steps and got that older version itself.

There is a link to the FAQ section in the toolbar. It sounds as if your repository never got added. Check to see if it is listed in /etc/apt/sources.list .

I think it is getting added as I can see that PPA here. 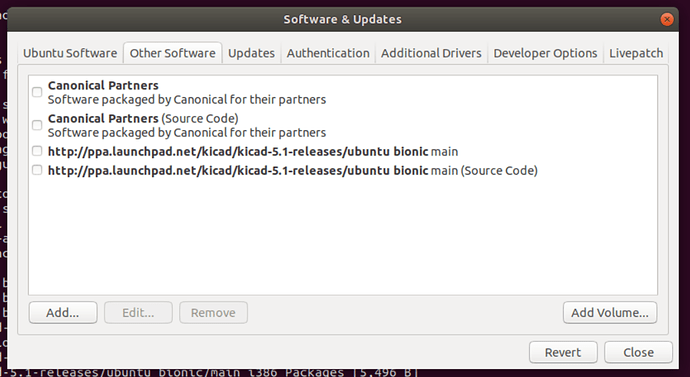 But it looks like it’s not active (no tickmark)?

Yeah. I was just checking my system to see how they should look. On my system the little boxes turn blue when the repo is enabled.

I am getting this when I click on that. And it was this tick with Orange earlier. I just unchecked it to see if this makes a difference. 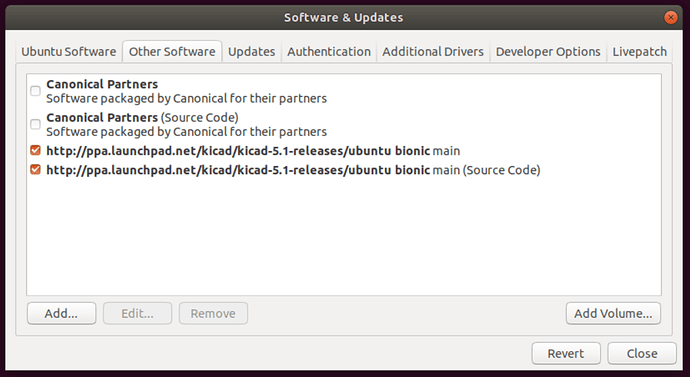 What does it show?

When you do sudo apt update, does it hit the kicad-5.1-releases repository?

Yes, Looks like it does as I am seeing this in result where it shows 5.1-releases.
Just now I uninstalled older version and trying to do this as a fresh installation.

What does apt show kicad show?

That’s definitely wrong. What’s the output if you do apt install kicad again?

How about apt show -a kicad, does it show both versions?