I have just made my first stab at making a small panelised board, which I ordered from dirtypcbs.com.

To make the internal route between two sets of mouse bites, I used the edge cuts layer. Does anyone have an idea if this is okay?

The reason is that the preview graphics showed the board filled between the mousebites :-(.

Is there another way to define internal routes? Which layer to use?

The way I have done this with OSHpark is that I use a graphic line on the edge cuts layer, but I make it the width of the routing bit (100 mil normally). I talked to Laen and he said that a lot of time the board house will rework this layer to what they are used to anyway. The thing I liked about using the 100 mil width line is that it prevented me from needing to do (and messing up) the math for tracing around the edges. f

Ultimately, I would talk to Dirty PCBs (or whatever board house you use) to see what they prefer.

If you’re interested in seeing the board I’m talking about, check out this link: https://github.com/ChrisGammell/TheAmpHour_Breakout 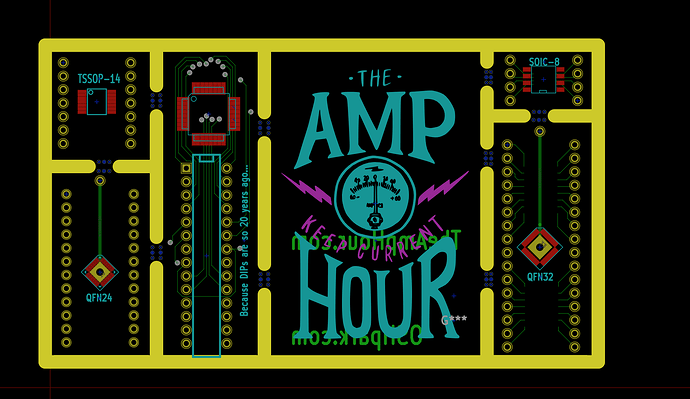 Thanks for the advice. Especially the general one of “Ask the service”. What a novel idea

I looked through the FAQ on the site an extra time, and then asked the question to help@dirtypcbs.com. 3 minutes later, I got a reply from Ian saying “It will be fine”. And that’s great, now I will just have to wait for the boards in 2-9 weeks.

I used the edge of the lines, which I belief is the non standard part. This just makes way more sense for me though.

How did you create the drills for the mousebites? What layer re those holes on and what size did you use?

How did you create the drills for the mousebites?

You can make a footprint for the whole tab. The circles would show the outline of the routing line ends. A word of caution: if you try to use array tool in the new GAL mode to make an array it will not replicate any of the “secondary” layers (drawing, cut edge etc.) so you would have to use append board method to create an array. 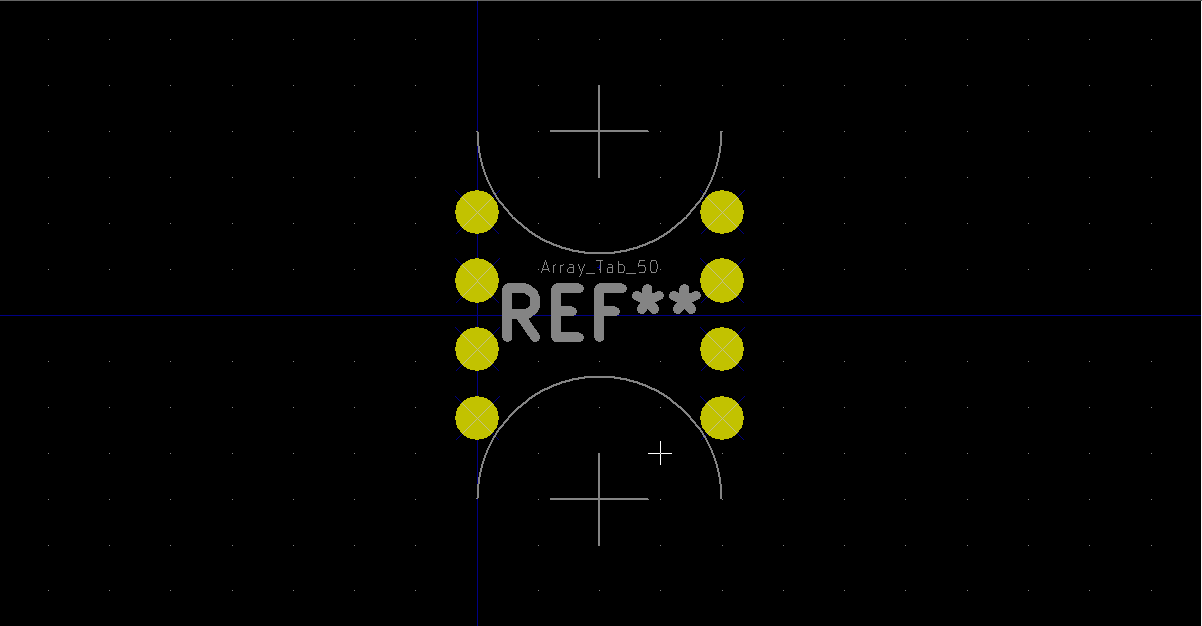 My first board to OSHPARK indicated 1mil routing which left tabs on the corners
They re-did the routing with mouse bites on the sides. OK with me but they did
all the wok. They had a total of 6 drills in a mouse bite. I used 1mill silkscreen
lines to do the layout and then reduced them to 0.001mm center-lines in an editor.

Thanks @ArtG and @dinsdale.

My PCB design is a nested set of rings.

I have a support ticket into OSH Park asking for guidance. They responded saying that I would just need to provide the 100mils spacing between nested ring boards and that I did not need to add the mousebites myself. I guess either they will add them when they panelize the boards or the fab will to keep the edge cutting process from dropping the inside ring on the floor during the cut. I hope OSH Park will respond with more details about that process. Oh, and OSH Park also recommended that I add the words “cut out” to the sections that should be cut out so its clear to the fab. They wanted those words added to the edge cuts layer but KiCAD doesn’t appear to allow that so I added them to the front silk layer instead.

That must be an issue with your version of kicad. I have no problem creating an array of a boards including dimensions, drawings etc.

Edit: what is annoying is the altered component references.

I seems that they have their own process that must be pretty efficient for them.
They will make necessary changes that work if they have enough info.
I put my text/instructions on the Cmts.User layer. I think they will just copy that
to their desired layer.
I know we don’t want appear lazy and leave a lot of work for them, but I think they
can make up for our and Kicad’s limitations without a problem.
My first attempt was rejected with a prompt refund and a nice email explaining
the rejection. So, just do your best, they will either accept or reject and tell you
why.

Lost of info about cutouts/millings here:

Hi everybody I am making a small sensor PCB with SHT21 temperature humidity sensor that will be placed away from the main board. I want to isolate the sensor from the PCB board so I am trying to insert 2 slots around the sensor as on below image. The thing is that the KiCad is not really allowing for this (or I don’t know how to do it). When I make a outline of the slots on the Edge.Cuts layer the 3D display crashes so i’m not sure that this would work in the PCB fab / gerber output. I’ve seen…

I think it would be acceptable to put routing on front silkscreen layer.
OSHPARK accepts that anyway.

I think it would be acceptable to put routing on front silkscreen layer.

How do you know what is real F.Silk and what is routing then?

I thought I saw some responses to your question here. Must have been on another thread.
Sorry about ignoring you.l
Well, I don’t know for sure. I was thinking of my situation building a panel and using
silkscreen for the routing. It was on the interior of the panel outline and OSHPARK had
no problem with it. Your specific case may be different. Put comments in that identify
the routing. They are pretty good at figuring out what you want and making modifications
themselves.

I agree. Above all else, talk with your fab directly about your intentions and have them recommend their preferred methodology. OSH Park was happy to answer my questions and in the thousands of boards they’ve sent to their fabs, I’m sure they’ve seen it all and know what works best in these situations. They were also happy to have me send the Gerber files direct to their support address and they promptly reviewed the file and said it should work fine.

As to feeling lazy or making them do more work than normal, I think that’s the service companies like OSH Park provide and what makes them thrive. They are super quick to respond and super helpful and never once was I made to feel like a noob when I was asking noob questions. 8)

And OSHP can’t deal with the outline and the internal milling being on the same Edge.Cuts layer?

I know KiCAD will give you ‘hell’ when you just draw non-closed lines (like a routing path) on Edge.Cuts, so you have to draw the edges of the milling… but it’s not that much work and should be ok with them?
At least then the routing/milling is all on one layer and there is no guess work involved?

I’m about to receive my first nested board design (two LED rings nested inside each other but separate boards). I created the PCBs separately and launched PCBNew manually to combine them into a single resulting Gerber file. It will be interesting to see if the outcome of that fab is as I expected, especially after sending the designs to OSHP for review and having them give me the go-ahead, saying that the output should be as I expect.

This is the result from OSH Park for my nested rings (see below).

To reiterate, I created each ring as a separate KiCAD project and then opened PCBNew manually (outside of KiCAD) to append both boards to the same file for Gerber export.

OSH Park recommended at least a 100mil gap between the two boards (enough for routing) and that in that gap, I add the words “Cut Out”.

edit: I did not create the mouse-bites or the pattern that the fab routed, I just created a space between the two rings - they figured out how to route it out and where to put the mouse-bites. I don’t know if OSH Park did that during panelization (probably) or the fab.

The result is just perfect for what I need and allowed me to make more efficient use of the space - pulling two boards in the same space as one. Arguably, I could put a third board on the inside to make use of that space as well but, honestly, I didn’t have anything that would fit that space. 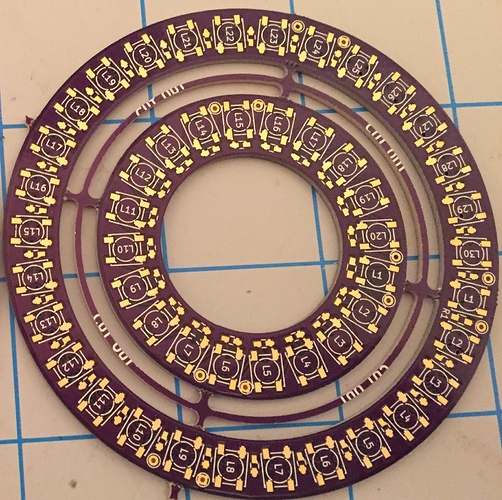 Oh, and because I don’t like to do things manually that can be done automatically and because PCBNew provides a scripting hook, I created a script that will automatically place my components in the ring pattern you see in the above picture.

After getting over the hump of figuring out how to get scripts to work in PCBNew and the class structure, it wasn’t that hard. It is not, however, a script that’s ready for prime time - just something I threw together using manual, not form-based, edits to change parameters.

Still, hugely rewarding, fun and a big time saver for this project and other ring-shaped projects.

The one thing that makes these circular boards less space efficient that they could be is the reliance of KiCAD on polygonal copper fills. I’ve minimized it as much as possible in the above design (I think) but there are still areas of the copper fill shape that forced the ring to be larger than it should have needed to be based on my edge cuts (which allow circles).