I am a newbie to KiCAD and schematic design.
But many years ago received an electrical engineering degree and I have plenty of software/design/cad /engineering experience.

I’m trying to create a flexible PCB circuit with a specific custom shape that is mainly just traces with a mask on top, bottom, and some drill holes. A friend of a friend helped me make one using his companies highly specialized software, and we got it manufactured via PCBWay. It came out great!

I’d like to learn how to make them as I have several more designs to create and he’s super busy, too busy to do more or help.

Any tutorials for this specifically, or anyone willing to assist in teaching me how to do this in KiCAD?
A made a simple example using FreeCAD 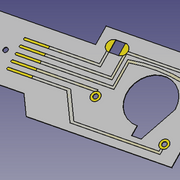 You could probably use the StepUp FreeCAD workbench. https://wiki.freecadweb.org/KicadStepUp_Workbench

BTW, do you know about flexible PCB design in advance? It’s not the same as rigid. For example all corners should be rounded. Search for example for “flexible pcb best practices” and “how to design flexible pcb” with google.

KiCad’s own drawing functions for Edge.Cuts are quite limited. If your oultine fits reasonably well on a regular grid, it is quite doable to draw it directly in KiCad, but when the outlines get more complicated, drawing then in a CAD progam is a better option.

You can draw the ouline in any CAD program that can export to a .DXF file, then import the DXF in KiCad and place it on the Edge.Cuts layer.

I have not designed a flex PCB’s myself. Any holes in a flex PCB reate a weak point where the bending radius will be smaller and flex PCB’s tend to break there over time. The flex PCB to the Keyboard of the old Psion 3 and 5MX are examples of these. They had a 2mm round hole in the flex PCB that proved a weak point.

I think that it does not matter much for KiCad itself whether the PCB is made with FR4 or with a flexible substrate. Maybe solder mask and silk screen is handled differently by the PCB manufacturer. When doing any non-standard PCB you should always at least look at the website of the manufacturer for hints.

As rounded traces are a must, KiCad v5.1 isn’t ideal because you can’t create rounded tracks with it. Because these flexible PCBs are small and simple feature wise, you could relatively safely try the unstable 5.99 with which you can create track fillets.

• Particular’s described by Flex mfg’s as related to Circuits on Flex should be adhered to…
• Commonsense as related to good design (to avoid tearing and cracking from flexing) especially around holes and corners
• All the other items of note, above…

Beyond that, In Kicad, a Flex circuit is No different than a Rigid PCB and, though not necessary, you can set the Board Thickness in the Board Setup. 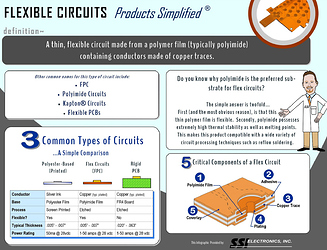 Thx. I’ll check that out.
I’m replicating a very specific design and shape of an old car circuit.
So the shape has to be the same.
Per your notes about holes, silk screening, bending, etc…one has already been made by PCBWay frm original design, per my original post. and it came out great. I attached a picture.

Thanks! That’s inline with what I’m making. I attached a picture of the first one we had made by PCBWay in the original post, which is a polymide flex substrate.
Do you have that file you could share?
Also, very very new to KiCAD. So I’m looking for some potential step by step how to do this.

As far as ‘Step-byStep’, look at most any tutorial on making a PCB in Kicad. Can ‘First’ do it without a Schematic to get your feet wet on making a PCB by adding existing Footprints, Making a BoardShape (edge cuts layer) and SilkScreen (silk layers)… etc.

Keep it simple, at first. Then, after that, consider making rounded corners/etc

I’m replicating a very specific design and shape of an old car circuit.
So the shape has to be the same.
Per your notes about holes, silk screening, bending, etc…one has already been made by PCBWay frm original design, per my original post. and it came out great. I attached a picture.

I didn’t notice the photograph in the gallery at first. The original looks what I would expect (although I’m not an expert). Both the base material corners and traces are rounded.

The only thing lacking is teardrops, they would make trace/pad junctions more resilient to damage. They could be added even though they are not in the original, but KiCad doesn’t have built-in support for teardrops (yet, see https://gitlab.com/kicad/code/kicad/-/issues/1953). Avoiding sharp corners is important in the places where the board is bent, the original looks like it’s bent only in certain areas, so sharp inner corners in junctions isn’t necessarily an issue.

… Option1:
Double-Click a Pad and change to Trapezoidal (shown below)

… Option2:
Draw a TearDrop shape (either using the Polygon tool or, in external Graphics program). Use it as the graphic for a “Make Pad From Shape” 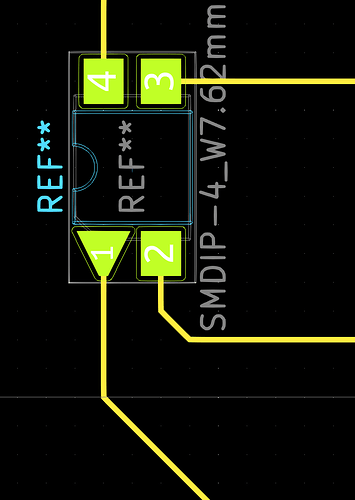 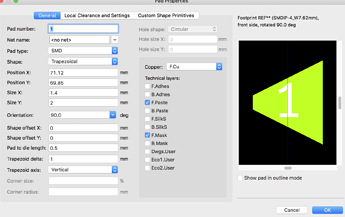 Thanks, I’ll give it a try. Appreciate you sending the file too.

Thanks. The Flex is more about how it molds to what it is attached to.
Once it is attached, there’s no movement or flex.
The picture with the black flex circuit is brand new.
the old ones are old technology foil where the traces are too thin and it is placed between two sheets of plastic where the glue has broken down overtime. Very common to find them split or traces burned up.

using teardrops (pads and PTH) is almost mandated by the IPC-2223, using them on rigid is also beneficial

I’ve been doing my homework. Watching videos and doing tutorials.
It’s coming along. I’ve started to build up a small library and a 4 pin test model.
I’d like to continue learning so I can ultimately build up my own flex circuit.

What are the rings around the pads? Design rule checker doesn’t like them.
How do I create a mask for the top layer so everything is covered except the pads?
Anything else in my newbie stuff that you’d recommend I work on?
Thanks
4 Pin Flex Test.zip (721.7 KB)

Getting close but, unless you want it as it is, items below don’t look correct and the cutout won’t be made unless via laser cutting… That cutout it a great opportunity for a stress-riser and flexing will rip there. In fact, always best to avoid sharp corners (except at outer corners if you can’t avoid them)… In world-war II, mechanics drilled big holes at torn areas of sheetmetal and aluminium to minimize propagation of the split… 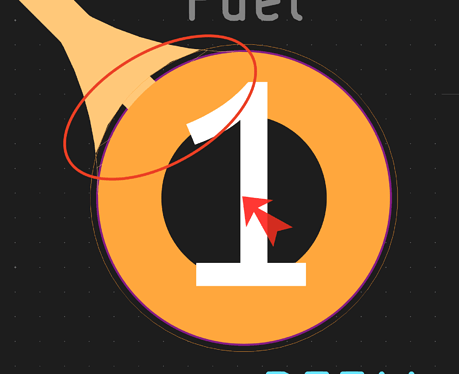 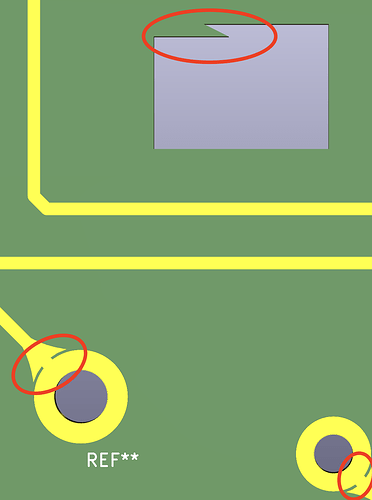 Thanks, that weird shape is just me playing around with shapes and edge cuts.
This isn’t the actual shape it will be, I’m just messing around with stuff to learn and see what it will do.
For example: I saw that you had an edge cut in the Footprint, but that isn’t native to making footprints.
Through forum reading, I figured out that you make it on another layer, then edit the file manually to change it to Edge.Cut. So again…just messing around to learn.

The edges on the pads that you circled. I don’t know how those are showing up, it’s not in my design.
It shows up when I drag the footprint to the PCB design. Why are those outlines showing up? 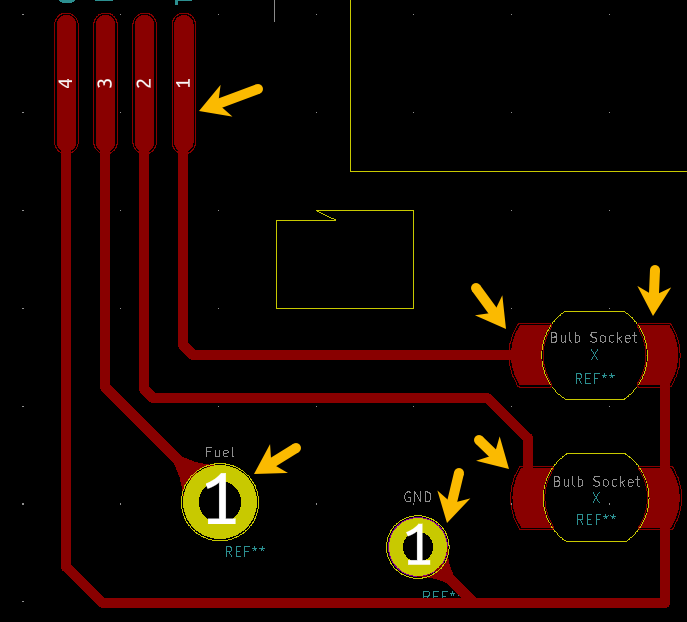 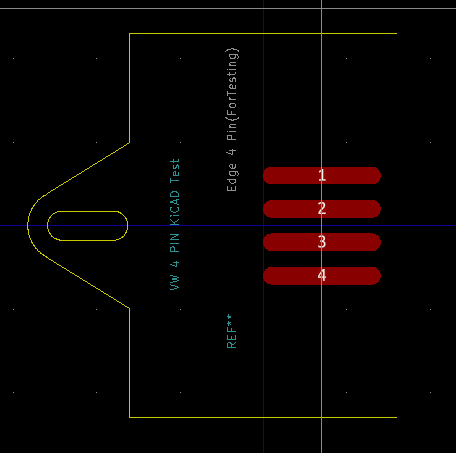 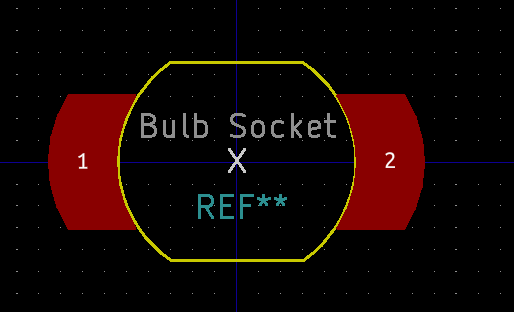 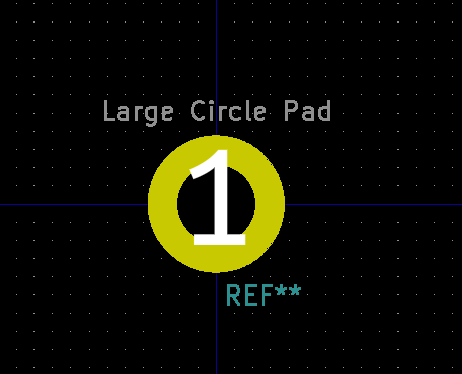 As I see it (and, I could be wrong) looks like you drew it as it’s shown - offset from round pad.

I dragged it over a tid-bit and think it looks like what you want…?

RE: DRC errors… Some folks like to use DRC. I don’t. I prefer to use neural-pathways (the circuit in my aging head)… DRC = Do Real Commonsense assessment

Seems like it is some setting. If I just drag a footprint to PCB, it’s there.
It’s some kind of PAD clearance option. I see where to turn on/off the display in Preference.
But that just turns on/off a display.

Now, I think I understand what you’re driving at…

It looks to me like your pad is not correctly made. Let’s call it a ‘Triangle Shape’ attached to an Anchor. Your missing the Anchor. The Anchor is the circular pad but, it gets defined as an Anchor in the process of ‘Make A Pad from Selected Shapes’. Your’s is just a pad, not an Anchor. 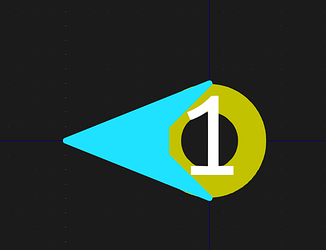 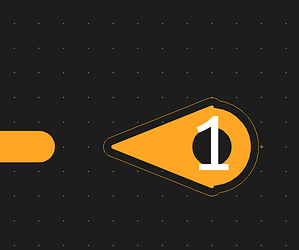