How can i find latest commit which is included inside nightly build?

Nightly Builds - How can I find revision number? Software

The version number is “<tag>-<# commits after tag>-g<git hash>” tag is the last tag in the repo, e.g. “5.1.0” # commits after tag is the number of commits since that tag was applied git hash is the last few digits of the head commit when the build was made. Confusingly “Release” just means the code was built with Debug options turned off. But, I can’t figure where the r13579 comes from, presumably added by the packaging.

Search for part of “hash” from version number string: 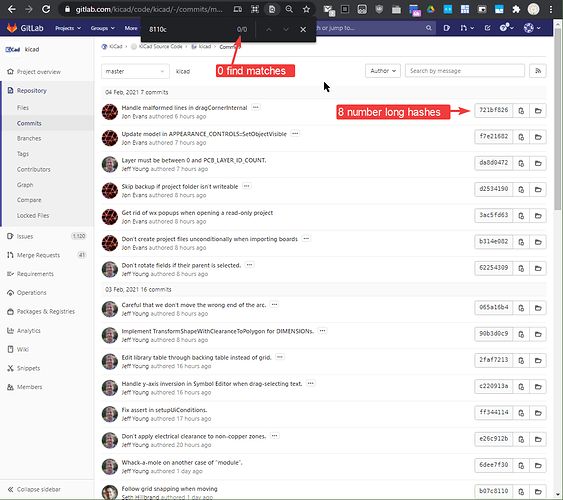 Note, that hash numbers in the web are 8 number long.

Sorry for probably a duplicate post, but all of them are closed / locked, without a direct answer (or compatible with gilab migration?). I would suggest adding this to FAQ, because there were at least 3 posts about this:

You had it almost right, the last two characters do not belong to the hash.

In this case I searched for this string:8110c8 and started deleting characters from the right, until i got a near match, then I just compared the match found with your version, it seems that the hash is between g and the last two characters.

it would be nice it GitLab would let you search by hash and not only message.

Last 2 characters do belong to the hash. In fact hash is a lot longer, it’s 40 characters long but git shortens them to the smallest unique prefix. Gitlab UI cuts off more than needed since even 8 chars are usually enough.

So, for the record:

Versioning string for v5.99 nighttlies is: