Idea for a KiCad project; LED replacement for torchiere lamp

We have a couple of torchiere lamps. They have a dimmer switch on the vertical stalk and use a 300W “T3” quartz halogen bulb. After many years of near-daily use, one of them quit. The dimmer quit; not the bulb! Anyway that is not the point. It is an energy hog. Quartz halogen lamps are only marginally more efficient than ordinary incandescent. An LED design replacement would save a lot of energy, but I do not see a good solution “off the shelf.” I have been wrestling with this in my mind for quite a while.

I am aware of some LED replacements for T3 bulbs. But their light output is more like 150W equivalent or less, and I have heard that they are not very good; they do not last…

I had one idea of trying to use a BR40 LED reflector lamp. But that is significantly taller than the dish on top of the torchiere lamp. So it would either be ugly or a major mechanical re-fit. A new dish somehow.

My idea is to replace the halogen with a round (or octagonal?) board with LEDs. More major changes:
Instead of powering it directly from AC mains, my idea is to power it with an spare 18V power adapter from an old laptop computer. That would have plenty of power. The dimmer would probably be DC or PWM output boost (voltage step up) circuit; perhaps 36V or 48V output. I suppose it could alternatively be a buck converter (voltage step down) delivering maybe 12V to the LED board. It might even work well enough to just pwm the 18V of the power adapter output. And all of that would probably have to be on the floor, with wires carrying the 36V or 48V up the stalk to the pcb. The voltage decision will affect the series/parallel scheme for connecting the LEDs. Due to the laptop power adapter, none of us would need work with hazardous mains voltage.

The obvious criticism of this plan would be the power adapter and dimmer switch laying on the floor.

Does this idea interest anyone?

A lamp on a stick.
Sorry, I had no idea of what a “torchiere lamp” was. Others may also not know.

Well yes. I was unsure whether it would be commonly known. But I figure it could be googled easily as you did. Mine is right around 6 feet tall. One could alternatively try operating it upside down and try to burn a circle in the carpet or other flooring.

In fact, shortly after we bought ours many years ago I think we found a safety recall. Those 300 W halogen bulbs can get quite hot, and I think there was a concern of flammable drapes getting up onto the bulb. We have never used ours where that was a possibility, but it is pretty good at accumulating dead insects.

I like the idea or the remote power supply and dimmer, especially if it can be conveniently reached without rising from a chair.

Building the LED structure seems a hassle. Most of the emitted light from the halogens is to the side, not upwards???

The T3 quartz halogen is tubular, 3/8 inch (roughly 1 cm) in diameter and several inches long, with 1 electrical connection at each end cap. The tungsten filament runs down the middle. I suspect that the light emission is pretty much symmetrical from any direction perpendicular to its axis. The halogen is oriented horizontally, so there would be as much light going down as up or sideways. It sits in a reflector but that reflector does accumulate dust and dead insects.

Another post got into LED filaments and I was wondering about those, but I do not see that good ones (as used in commercial bulbs) are generally available. So I was thinking about using a bunch of SMT LEDs emitting mainly perpendicular to the plane of the pcb. This might even improve on the light emission direction of the tungsten lamp.

I thought the LED’s came in different dispersion angles up to 120˚? I think you can also get lenses. That said, don’t overlook the positive effects of bounce lighting. A light source at eye level isn’t the best to start with. Don’t get caught up trying to recreate what was the best bad solution to start with.

Example with Four of them and 100 ohm resistors powered by 6vdc.

(I use Red ones with my Telescope’s) 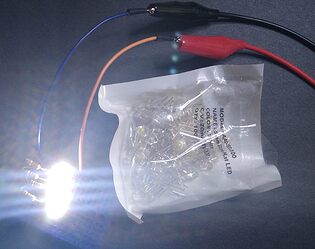 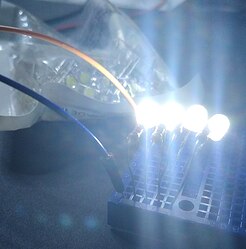 You are never going to replace a T3 lamp with an LED module and be able to keep the same form factor. If you have enough area to allow a fairly large PCB to rest in the base of the fixture, I would look into the high-power COB LED arrays, and use an aluminum heat spreader.
The electronics are pretty trivial - it’s the mechanical and thermal design that is hard.

I was just looking up the lenses and it reminded me of the COBs as you were posting.

COB by Chanzon… Those StrawHat LED’s are Chanzon - good products from them. I also use their PCB stock for Milling PCB.

My idea is that the light source does not need to physically resemble the T3 halogen, which shape is not ideal to begin with. I am thinking of a pcb light disk which lays in the reflecter (bowl or dish) at the top of the lamp. I think that there is a wide variety of SMT LEDs which could be placed on this disk to do the job. Might need 50 of them? The selection of candidate white (“high power” whatever that means) LEDs from Mouser (for example) is rather broad. 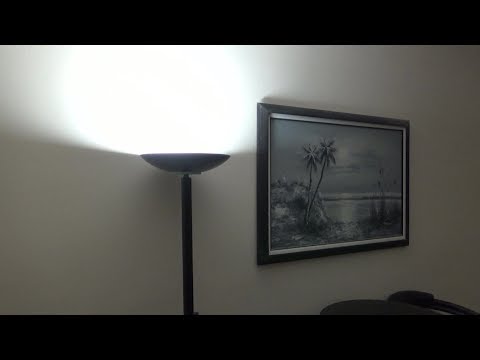 The Satco S16503 T9 Circline LED Circline light has a G10Q bulb base making it easy for a fluorescent, Type B - Ballast Bypass tube replacement. This Circline LED retrofit bulb emits 1600 lumens with a 3000K color temperature while using 16 watts of...

Those Chanzon COB’s pull 3Amps. That’s a lot for home lighting.
That aside, it will take 25 of the StrawHat LED’s and 100ohm resistors to pull 3A. 25 would be very bright - I can’ barely look at just the 4 I show in screenshot and together, they pull 120mA

Claimed lumens is 840 and power used is 7W. As a basic benchmark, if I had 5 of those it would approach my 300W equivalent, produce 4200 lumens, and consume 35W at full brightness. That is only a rough target for full power light output and power consumption.

The Satco S16503 T9 Circline LED Circline light has a G10Q bulb base making it easy for a fluorescent, Type B - Ballast Bypass tube replacement. This Circline LED retrofit bulb emits 1600 lumens with a 3000K color temperature while using 16 watts of...

Mechanically the ring sounds great, but the light output is much lower, and I bet that it is not dimmable. I think it just connects directly to AC voltage. Usually I think that the wide VAC input range types are not dimmable.

As for the Chanzon. That looks interesting. Wow that is a big “LED”. I suppose that at about half power it might work, I do not know whether there is more to it than just a bunch of LEDs in series/parallel. If it IS just that, then perhaps we could get good results by driving it at 35 - 50W maximum and we would probably get somewhat improved efficiency. At $12 for one, the price seems pretty good. It is too large to fit two of them!

As for that video…I think that is one I saw weeks ago. I think that his idea is just to get an LED panel and throw it in there. I don’t think he even mounts it in any way…I think the power is low and he is just presenting a crude concept.

One big point: If we make a pcb panel with low voltage, it can be largely exposed without exposing high voltage. That in turn might make cooling easier. My idea is to use as much copper on the pcb as possible, or maybe use an aluminum pcb. I have not worked with those.

I bought an already made Feit electric “bulb” that screws into the torchiere style lamp originally made for incandescent lamps from Home Depot several years ago. It still works. It is Rated at 38 W, 325 mA. It has 40 white LEDs in four vertical outward-pointing columns(so pointing in the N, E, S, and W directions).
So that’s 3V per LED. The plastic housing is 19.2 cm
above the metal socket and is 7.8 cm in diameter. That’s the easiest way. All LEDs point radially away from the socket axis. The one I bought is NOT motion-activated. https://www.feit.com/product/intellibulb-motion-activated-4000-lumen-5000k-led/

The video above and the images from @jmk show the general shape of the torchiere lamp. The power rating of your FEIT lamp seems right, but the shape of it will not work for my (and the usual?) design. If I could easily fit a screw base bulb, I would first try a BR40 style lamp (although the light output is down for those.) Functionally I think a reflector type would work really well. When was in college, I used some wire to hang a reflector type halogen just on the wall, shining up at the ceiling. Minimal “cheap and dirty” solution, it gave a very nice indirect light.

If I could make new nice looking top end of the lamp, I would design an oval or rectangular top to fit two of these 150W equivalent 2200 lumen BR40s. Woops OK it is a BR30. Surprising but not a problem.

But making things that look nice sort of goes against my religion.

I focus on function and to heck with form. My wife would not tolerate the result of that!!

I’m not suggesting purchasing from there, but Aliexpress have bucket loads of stuff from which to get ideas.
I typed 30W LED and up came 60 ish pages.

Thanks. Even at Mouser they have a very large variety. That is sort of part of the problem. I was looking for “LED filaments” but I see little availibilty of the sort used inside light bulbs. But probably the SMT LEDs are a better fit because the light is emitted mainly perpendicular to the pcb.

The thing I dislike about buying anything technical from Amazon (or I guess Ali Express) is that it seems so difficult to get a complete technical description of what you are buying. I think that the Chanzon device is just an array of LEDs connected in series/parallel (perhaps with some ballasting resistors) but it would sure be nice to see the circuit diagram. Amazon is not oriented to customers who want to design their own driver circuits. Maybe Ali Express is actually slightly better? I have “been there” but never bought from them.