How to combine many gerbers form various projects into one

Can anyone help me with “How to combine many gerbers form various projects into one”.

i have gerbers from many projects i want to fabricate them on a single PCB substrate.

Thank you in advance

Combining multiple gerbers is called a “panel”.
Here is an example from the Purple Factory: 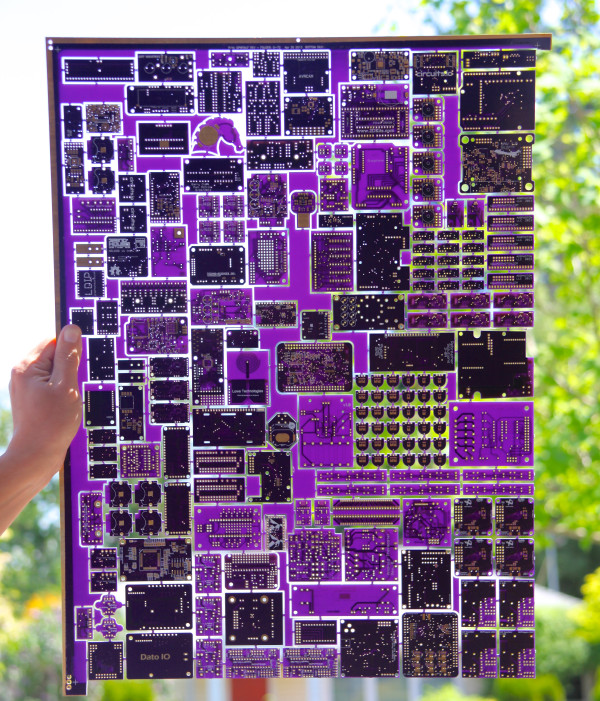 Oshpark_Panel600×701 257 KB
The tradional way to make such panels is not with a PCB program,but by post processing the Gerber files with some other program. Note that in the picture above, all the different PCB’s are still connected via small bridges.

In the last 10 to 20 years or so, it is apparently more common for PCB programs to have build in features to help with making panels. KiCad however does not have any built in support for creating panels yet. Panels can be made with KiCad, but it is a bit of a hodgepodge of creativity and possibly some helper scripts.
Here is another thread about this topic from just 2 days ago, and it also has some hints and links:

First: Currently there is no built in support in KiCad for making panels. Second: How can this be: The “append board” option is not available when Pcbnew is used in a project, but it is only available in “standalone mode”, that is: directly opened from your OS, and not from KiCad’s project manager. There are several tutorials and even scripts to work around and help with creating panels in KiCad. Here are two articles posted on Hackaday: (And there are more & other helper scripts …

Do a search on the term “panelization” here and other places like hackaday.io and you’ll find pointers to software that post process Gerbers to combine them into a new Gerber.

Bear in mind that you will need a way to separate the boards in the resulting panel. Two ways are V-cut and slot with mousebites (more search terms). The factory will usually charge you extra for these services which will diminish or cancel the savings you might get. Also remember if you exceed the 100x100 mm limit on cheap boards the price goes up. So hobbyists use panelisation on small boards. Here’s one I did on a small breakout board for small ICs. In this case a single design is replicated in a matrix.