Hierarchal block to be used for multiple inserts in schematic

I have a schematic that requires 18 copies of a 4 component input protection. Is this a good use for hierarchal blocks?

I ask because it seems folks talk about a root page having just blocks. My “root” page would be my current schematic with a number of components R,C etc and of course the 18 blocks.

Not a problem. I’ve done something similar myself.

For the PCB part it can also be very handy to have a hierarchical schematic. There is a script called “Replicate Layout” for KiCad, and with this script you place footprints and route one of the identical hierarchical sheets, and you choose one “reference footprint” and place that footprint from all the hierarchical sheets on the PCB and then run the script.

The script copies the tracks and footprint positions of the sheet you routed manually and copies that to the other locations while taking into account the position, orientation and PCB side of those reference footprints. The script can also be run multiple times, for example to update all the parts if you have modified the schematic.

This thread has both a .pdf with a user manual for the Replicate Layout script and lot’s of extra remarks about it’s use:

I uploaded a first draft (pdf) of a writeup. Feedback is welcome–maybe I should add a section crediting the author. replicate_layout.pdf (240.5 KB) At this point, I’d reference a video tutorial. First showing the example “multiple_hierarchy”, but with a simple resistor network in Leg.sch. Then, I would add the “sensor.sch” sheets in the Leg.sch to highlight the ability to handle multiple levels of hierarchy.

@Rene_Poschl
Would you care to add a reference to the Replicate Layout script to your FAQ article?

Select the schematic sheet from which you would like to replicate the block. Then right-click and select the options duplicate block. 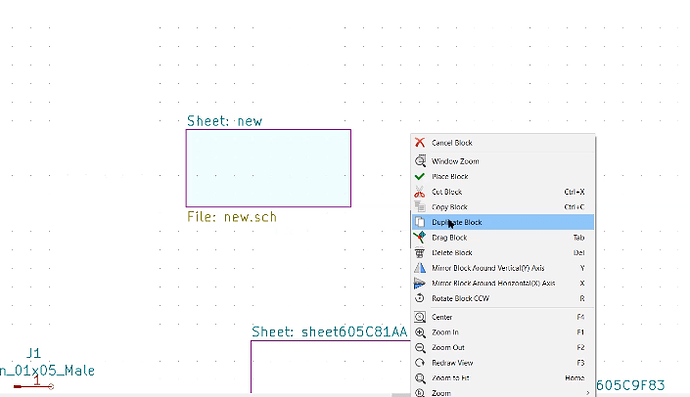