It would be very useful if all the settings for dimensioning tool (especially units) would be remembered and reapplied when putting dimension next time. Currently I need to reset from in to mm each time I added new dimension, even mm is set as main units it pcbnew preferences. Maybe checkbox “Use these settings next time” can be added. Also, such behevior can be enabled during active pcbnew session, in case it would be easier to implement.

I notice that @craftyjon is in the USA, so maybe why his tool defaults to Imperial units
In my opinion, the dimension units should default the the Pcbnew setting

What setting is this:

even mm is set as main units it pcbnew preferences

For me, measurements are shown with the initial units was last set in:
Pcbnew / View / Units

Or easier, with the units selection buttons in the left toolbar:

[Edit] Addition:
When first replying it was out of context because I did not realize this thread was split of from:

I taught the dimension object some new tricks. Yes, I know KiCad could use a lot more things relating to drafting. Baby steps! [image] [image]


and thus responded to poco’s post as if it was a question instead of a response.

Also, I was taught in school to not use units strings on all measurements. Especially when there are lots of measurements on a drawing it takes up a lot of real estate.
Also went hunting in some 20+ datasheets for a nice screenshot, and none of them have the units added to the measurements. Usually there is a some kind of remark nearby, for example like:

Please wait until you can test the new features. Some of the wishes may already have been fulfilled. Like…

Also there is an “Automatic” option for the dimension units, which means “change when you switch the UI units”

And one of the “units format” options is to have no units suffix at all, so you can just display the numbers.

Could this pre and post text allow the variable (defined by $) text replacement? 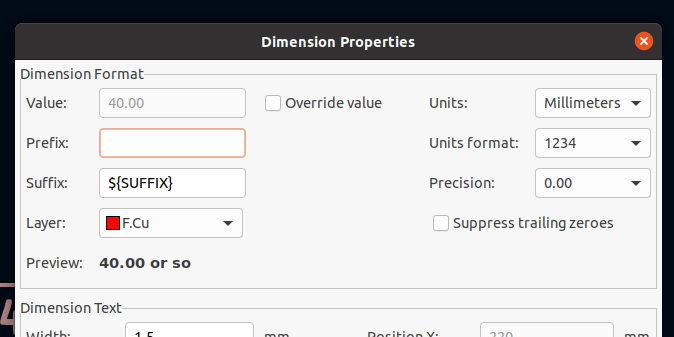 See @paulvdh footprint image example. The side bars of the measure are close but doesn’t touch the measured point.

Although this is not really useful as individual adjust, as a project global setting it will increase the quality of the mechanical layers.

Some other 2 ideas are: 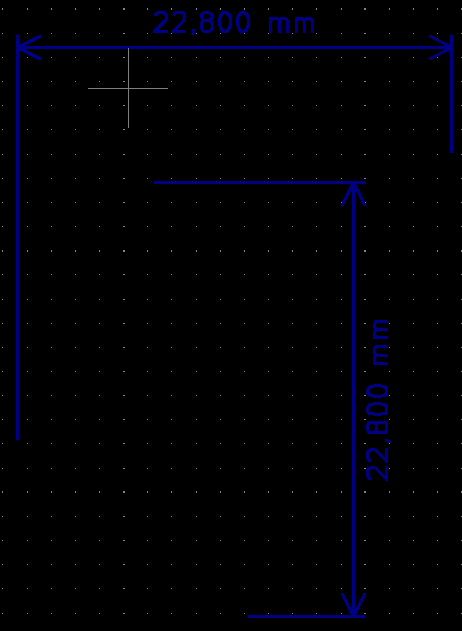 Some other 2 ideas are:

that is more or less what I would need (or workaround-ed) in the Altium importer. There are around 9 different types of dimensions objects included in Altium to my knowledge. (linear, angle, diameter, …)

Additional dimension types are coming, but maybe not for V6 (it’s very close to feature freeze, we’ll see). KiCad has forever only supported an “aligned” dimension, but of course there are many more types of dimensions that you might want to make a full technical drawing.

Spacing to the feature lines is actually supported under the hood now, there is just no UI option for it yet. I’ll add this.

but maybe not for V6 (it’s very close to feature freeze, we’ll see)

That’s interesting. Will 5.1.7 ever become a stable release?

That’s interesting. Will 5.1.7 ever become a stable release?

Yes, it’s actually going to be released very soon (target is end of September) since it’s in string freeze. No new features will be in 5.1.7, just bug fixes. Once V6 hits feature freeze we still will have a lot of bugs to fix before we get to a 6.0 release candidate.

In autocad, which I used some 20 years ago, there was a special token for “put the number of the measurement here”. I thing it was something like “%[…]” but can’t really remember. Something like ${VALUE} would also be just fine to me.
The idea is to not have a separate prefix, value and postfix, but a single string in which all the settings are combined. This also makes it easier to keep the texts uniform between different measurements, and quicker to adjust, as a single “format string” can be pasted into an existing measurement.
I like the simplicity of the good old C formatting such as “%5.3f”, but for KiCad something more in line with python formatting may be more logical.

This would need some more thought to also be usable in other entry fields throughout KiCad.

While I don’t doubt the power of that approach, I don’t think that’s the way we’re going to go, at least right now. All the same things are possible, though, just done in a different way. 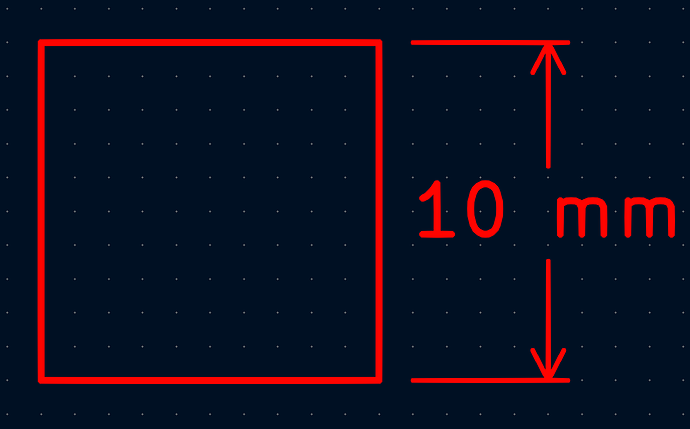 I’m quite happy with any consistent interface.

I do not have too much much experience with UI design, but the little experiance I have it often starts with “something useable” to get started. Then it grows organically and gets extended. Then at some point it becomes a good idea to rethink the strategy and decide wether you want to continue as previous, or use another, possible more flexible approach.

For this particular UI (dimension format) I am looking at other tools that have better drafting capabilities than KiCad. This method of having an explicit prefix and suffix field, as well as having separate controls for precision, etc. is not new to KiCad – it is the same paradigm used by Altium Designer, OnShape, Draftsight, and probably others (those are just the ones I checked so far). I don’t doubt that using a formula-based approach like printf is possible in some applications, but it comes with its own challenges in terms of ease of use.

that is more or less what I would need (or workaround-ed) in the Altium importer. There are around 9 different types of dimensions objects included in Altium to my knowledge. (linear, angle, diameter, …)

+1 for the CADSTAR importer too. Also has same in terms of variety of dimension objects.