I ran into trouble in Step 7. Opening the Proto FeatherWing.brd file as “Eagle ver. 6.x XML PCB file” results in this dialog:

Does anyone have a FeatherWing template for KiCad that I can use as a starting point?

Or, alternatively, any idea how I can go about diagnosing/fixing the error with importing the Eagle PCB?

The most useful information for such an endeavor would be located here (feather dimensions and schematic): 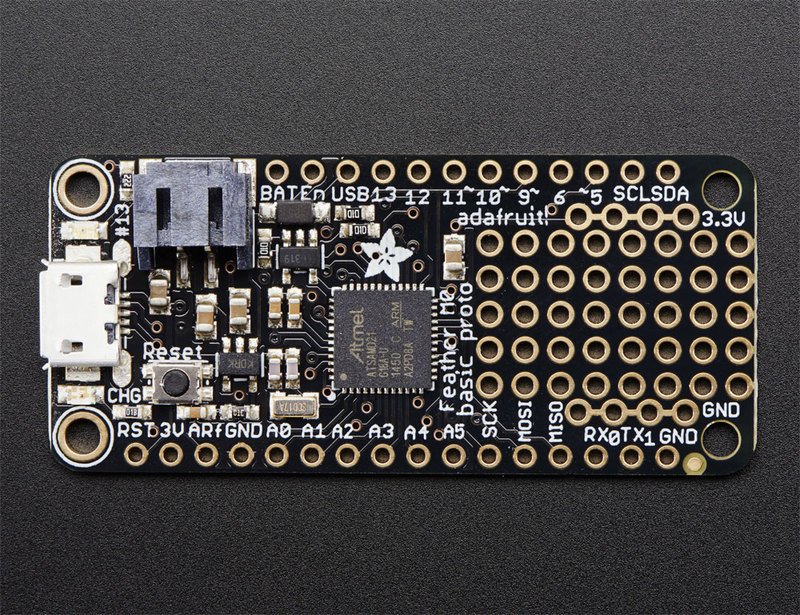 Use at your own risk: 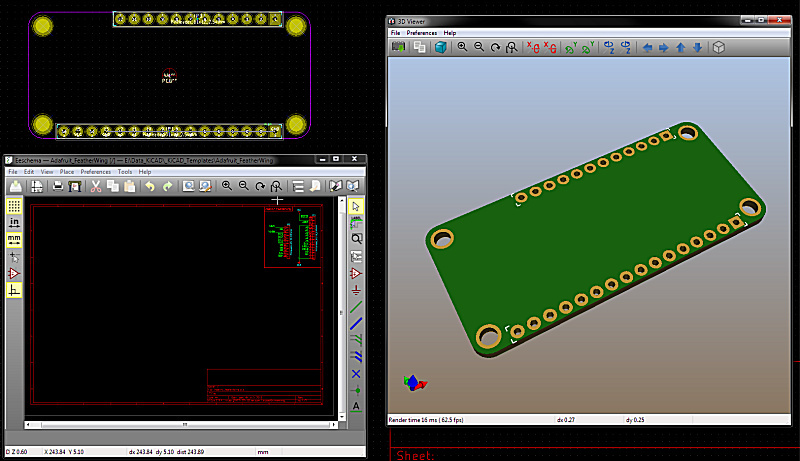 Disclaimer:
Made with a nightly version of KiCAD from February this year on Windows 64bit which has no idea of correct fp-lib-tables nor correct github symbol library paths/content (probably older than June 2015).
I took the Arduino Pro Mini template and just reused the power symbols for the schematic found in there, as I don’t have the ones that ship currently with KiCAD.

PS: this is the ‘board outline’ as a kicad footprint module, in case someone needs it directly (contained in above zip): 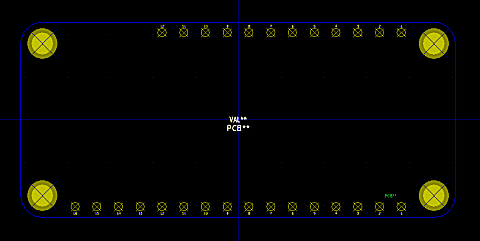 If its any use, I have automatically converted the three Feather wing boards to KiCad. https://github.com/bobc/Adafruit-FeatherWing-Proto-Doubler-and-Tripler

I have noticed a few problems with the conversion,

but it may be useful as a base.

I fixed problems with schematic position, arcs on pcb showing as lines, solder mask on vias. Also added a custom worksheet to look like the Eagle original, and convert dimension lines on PCB.

If anyone has any Eagle projects they would like converting, let me know.

I just now got back to this project, and I noticed a couple of things:

I’ve modified the template to fix those issues. Unfortunately, this site won’t let me upload an attachment, so here’s a link to it.

You should be able to upload now

You should be able to upload now

Thanks! Here’s my corrected FeatherWing template, as an attachment now:

Now that I’m more proficient with KiCad than when I originally posted the question two years ago, I’ve redone the FeatherWing template from scratch in KiCad 5. (The previously posted template is for KiCad 4.)

My template is available on GitHub and is also attached to this post.

Is the FeatherWing different than the Feather PR[1] in the official templates git? If not, would you be able to look at the suggested template and give it a test to see if there’s anything missing?

Is the FeatherWing different than the Feather PR[1] in the official templates git?

A Feather (processor board) differs from a FeatherWing (peripheral board) in that the Feather has a MicroUSB connector, and a JST-PH connector for the battery. A FeatherWing does not have these, since it gets its power from the Feather.

If not, would you be able to look at the suggested template and give it a test to see if there’s anything missing?

Not missing, but the two right mounting holes appear to be incorrectly positioned. I’ve noted this in the PR.

Please note that bottom right hole is missplaced by about 0.01 inch 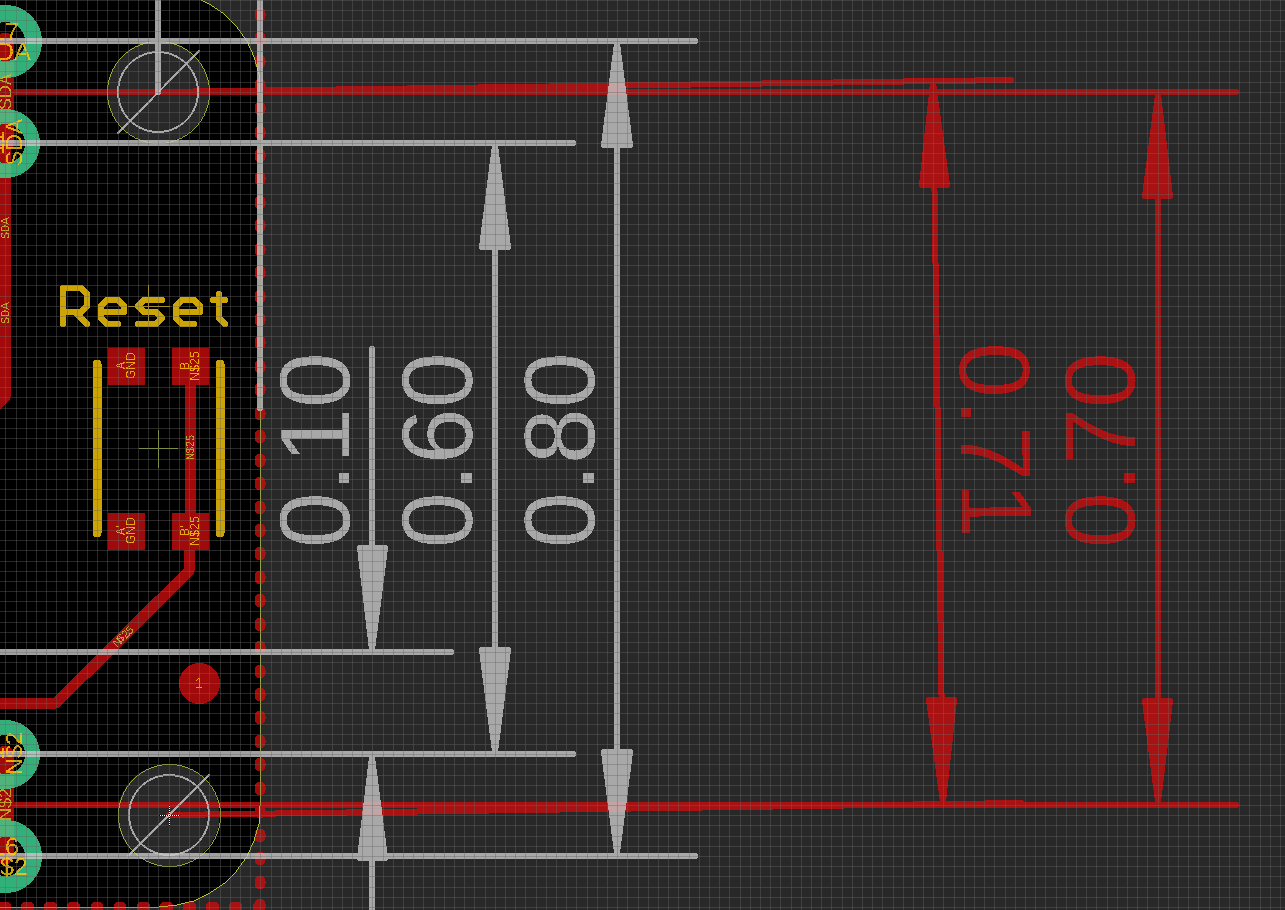 I had to make some changes to make this template work on the latest KiCAD nightly. Here is my fork if it helps anyone. @ppelleti feel free to bring my modifications into your main template if you want.

Here is what I changed: 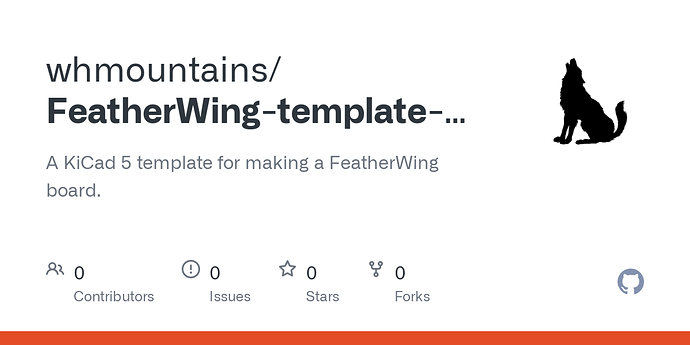 A KiCad 5 template for making a FeatherWing board. - whmountains/FeatherWing-template-KiCad