I’ve been putting off using Blender since over 5 years, being intimidated by the complex UI and workflow, until this month when I mustered courage to go through Andrew Price’s Doughnut tutorials. My aim was to learn how to do photo-realistic renders of KiCad boards.

I started off with the Open Hardware Summit 2020 badge (which I had a bit role in designing). KiCad’s in-built ray-tracer does a decent job, but there is no way to adjust lighting, background and other parameters. This is what it looks like in KiCad. 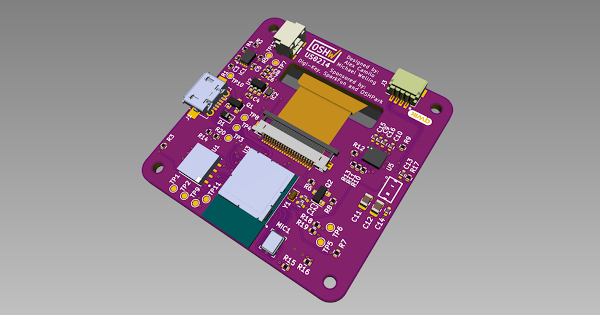 Raytraced render from KiCad - bottom side 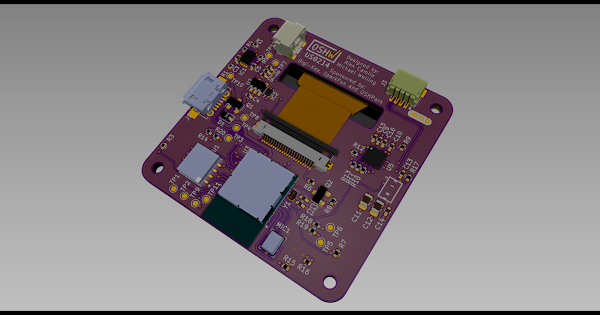 This is the bottom of the PCB, so the “floor” is not visible, and the overall render looks darker than expected.

Raytraced render from KiCad - top side
As a comparison, here’s what the top view looks like. You can see shadows on the floor. There are multiple light sources (multiple shadows), and the scene looks washed out due to excess light. 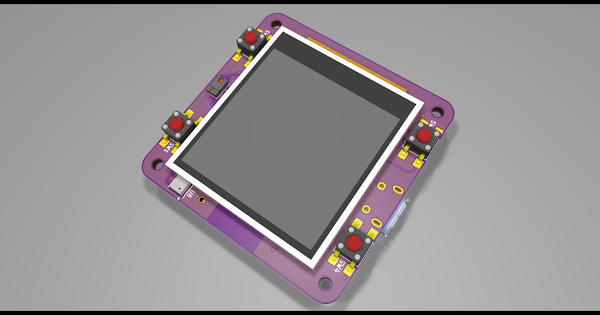 Unfortunately, KiCad raytrace option does not allow us to set lighting, floor and other scene parameters, hence Blender. So my next step was to export VRML and STEP file models from KiCad.

The STEP export from KiCad is useful in MCAD for designing enclosures and such, but it doesn’t have copper and silk layers, and no material textures too. So it isn’t much use for realistic renders. 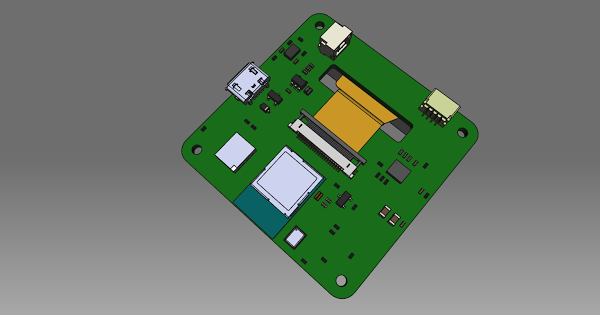 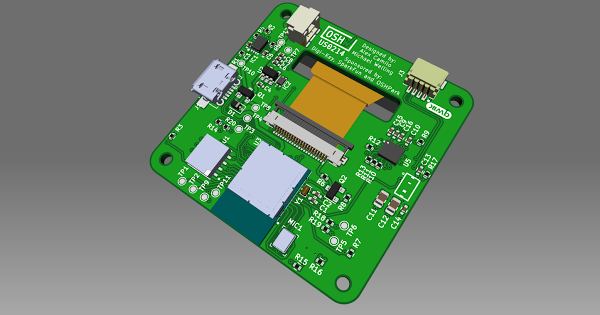 One important difference between the raytrace render as seen in KiCad v/s the exported VRML is the “MASK” layer. Look at the “W” in the OSHW logo and the “qwiic” logo. In the KiCad design, there’s a mask opening over these elements so that the underlying Copper/Gold is visible in KiCad 3D. In the VRML export, this mask window gets covered over. So the VRML export from KiCad is not a faithful representation of the board.

I ran another test by using KiCad StepUp Tools workbench in FreeCAD to import the Board with parts and Copper and Silk layers. Once again, the result was the same - the mask openings do not show up as in the pic below.

KSU Tools import in FreeCAD with Copper and Silk 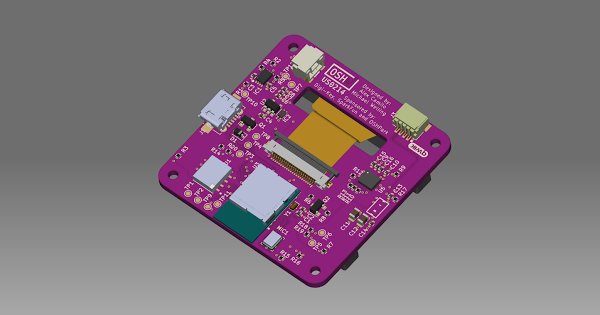 At this moment, I not sure how to resolve this - so anyone have suggestions, please comment away.

Anyway, next step was to move to Blender and try getting better renders. Here’s what the KiCad VRML import looks like in Blender. 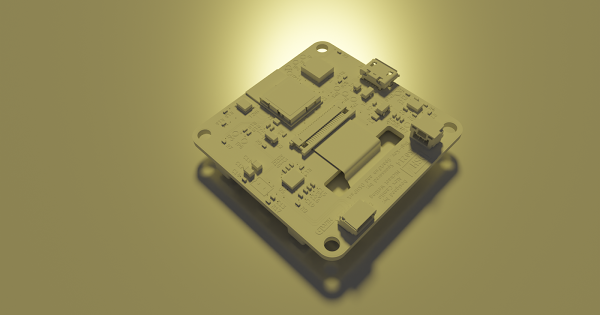 According to @maui in this thread, from Blender ver 2.8 onwards, the WRL/X3D importer has been changed causing the lack of color/texture import. 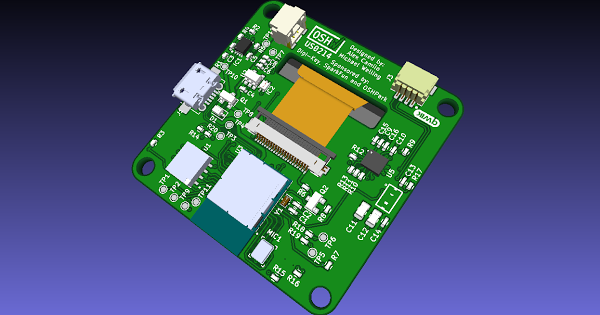 A workaround to this that I stumbled upon is to use the online 3D file format converter at CADexchanger and convert the KiCad VRML file to a Collada DAE format. Importing the DAE format in Blender results in glorious color renders. 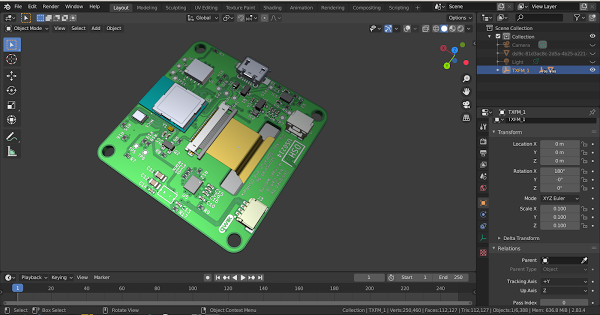 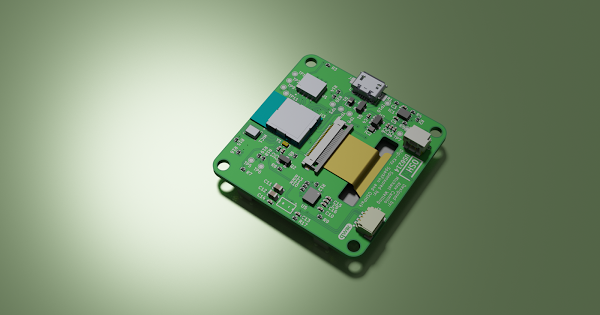 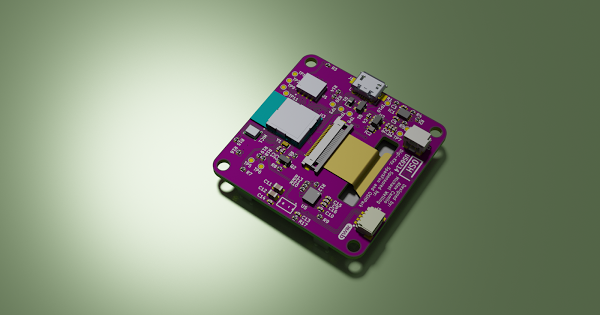 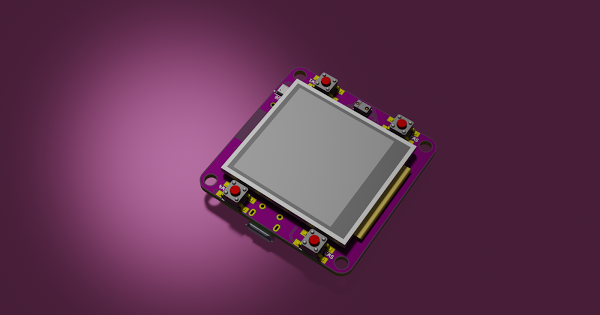 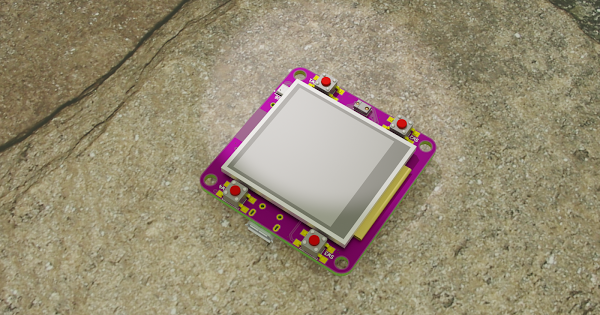 So the workflow looks good now, and it’s possible to get nice renders using Blender. At the moment, render quality is only hampered by my very limited knowledge of Blender (about 2 weeks old) - so more experienced Blender power users will be able to do much better.

Also, FreeCAD ver 0.19 Render workbench has a Blender option now, with Cycles rendering, but I haven’t yet got around to figuring out how to use it. 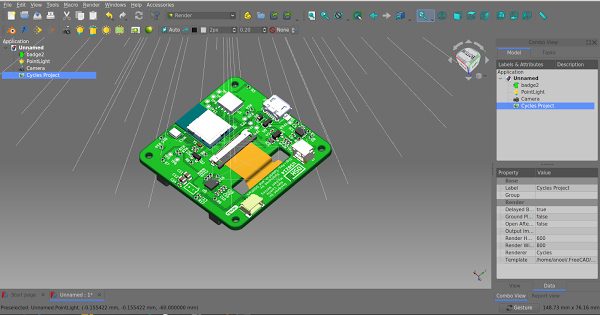 The one issue which needs to be resolved is the inaccurate “mask” layer export from KiCad and I’m hoping anyone with more insight on this can tell us how to get it right.

Next up, i’m going to try making the initial footprint models more realistic by adding device information on the packages and such.

In a later post, I’ll describe the Blender workflow needed to get :
– Colors for the various PCB elements – fibreglass body, solder mask, copper, silk legend
– Adjusting light and camera (although there are a lot more better, detailed tutorials on this that you can find)

If someone can figure out a way to avoid the KiCad VRML <> CadExchanger COLLADA DAE conversion, it would be awesome.

In the future v6 will have a bit more possibilities, but Blender may still be the way to go. Post-v5 new features and development news.

The 3D render is a good visual check and useful as an integral tool. I’d prefer the developers spend more time on the PCB layout part. So, yeah, making the output Blender friendly would be the better option in my opinion.

I’m starting to think the FAQ may need a tutorial section? Not sure something like this is ‘frequently asked’.

the mask openings do not show up

This is certainly a bug IMO, please report it.

Seems like an open issue since 5 years, and confirmed by you about 6 month ago.

Original report created by firewalker (firew4lker) When you use the export function of pcbnew...

I’ll add my response there, but I guess we ought to wait and see how things turn out in v6.

I figured out an easy workaround to the mask opening over copper areas issue for VRML export from KiCad.

For any footprint with copper area that needs a mask opening (such as Logos, which typically won’t have any pads), the solution is to edit the footprint and add a copper “anchor” pad. The pad doesn’t have to be numbered or assigned to any net. Adding a small SMD pad is sufficient. 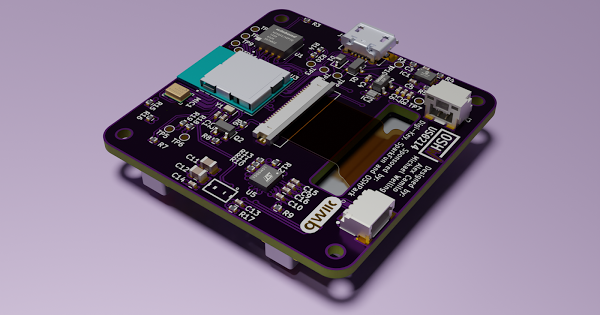 Could you point which one are the openings that differ in both pictures ?

I am assuming that those are the ones here: 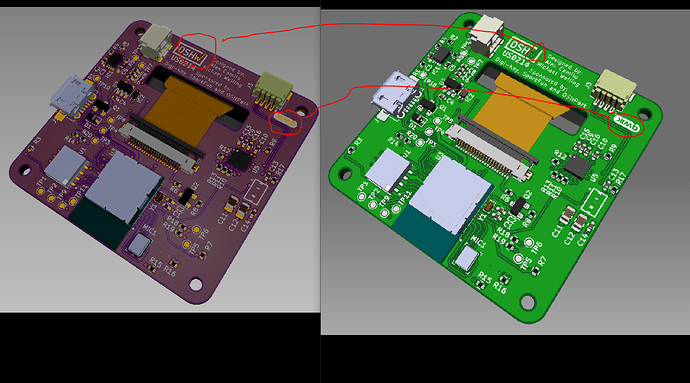 But I do not know the board, moreover in your last render where you mentioned your workaround (beautiful btw!), they are purple not copper color.

Yes, the parts you marked are the ones I was referring to.
Problem with the last render is PEBKAC - I still have to learn a lot about the lighting and rendering part. But here’s a better view. 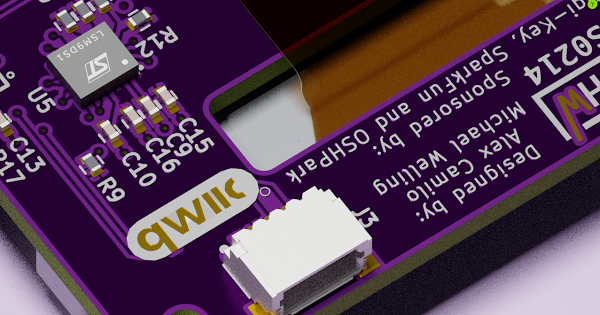 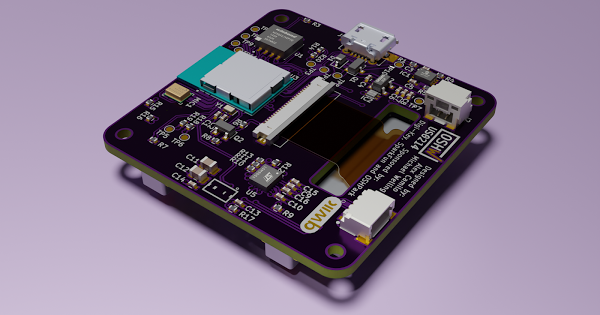 Got it, thanks a lot for sharing. It looks stunning!

Now you need to check on the placement of the qwiic logo. It appears to be shorting the I2C lines in your render. (And looks larger relative to the other board features compared to your previous renderings in this thread.)

But kudos on finding a workaround.

Logo shorting the tracks - yes, indeed. I was just focussed on solving the immediate problem (but I fixed it later).
While I was at it, I redesigned the footprint from scratch via FreeCAD stepup tools, which is also why it appears larger in the latest renders.
The badges have already been produced, so luckily whatever changes I make to my version of the board will be virtual.

This is really neat! Thanks for taking the time to document your process. With all the badges still trapped at NYC, it is nice to see they can live in full 3D in cyberspace

Note the blender does not need to be installed. So you can just copy blender 2.79 to your local drive and run it directly. Therefore, you can have multiple blenders on the same computer.

Having said that, I really hope the latest blender can fix the .wrl issue. I took a look at the import_x3d.py but could not figure it out due to my poor .wrl knowledge.

Having used blender for one week, this is the best result I got so far. I only use the Principled BSDF shader. Several tricks I learned along the way: 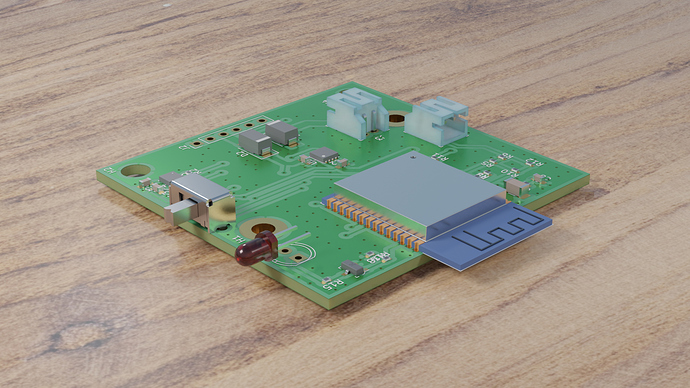 Having said that, I really hope the latest blender can fix the .wrl issue. I took a look at the import_x3d.py but could not figure it out due to my poor .wrl knowledge.

you can find a workaround here:
https://developer.blender.org/T71232

Thank you! It works very well.

For anyone who is looking for a solution, you need to replace the appearance_CreateMaterial() function definition in import_x3d.py with the following:

The import_x3d.py file can be found in [blender install path]\2.90\scripts\addons\io_scene_x3d

Just to state the obvious:
There are several tutorials for using Blender for rendering KiCad boards on:
https://www.youtube.com/results?search_query=%2Bblender+%2Bkicad

[Rant]
For some kind of irritating reason it seems to be “modern” to use logical or instead of logical and in search engines these days. With the result that you get more clutter if you try to narrow down your search. Just another way in which the Internet is ever more deteriorating.
[/rant]

Here is a comparative render of @Anool files from his Kicad->Blender workshop with the current development of KiCad: 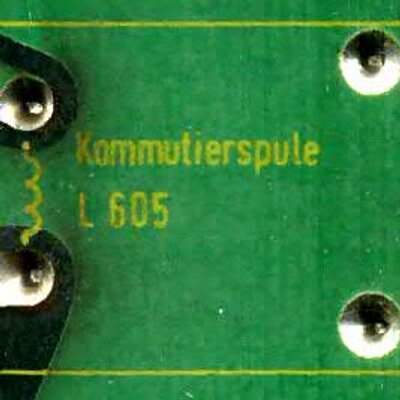 Thanks to @anool to provide the data files used on his @kicad_pcb to #Blender3d render workshop. Using the same files (with some material adjusts), here is a render example of what you can achieve with the next KiCad's 3D-Viewer version twitter.com/anool/status/1… https://t.co/lKQZr6ADuL 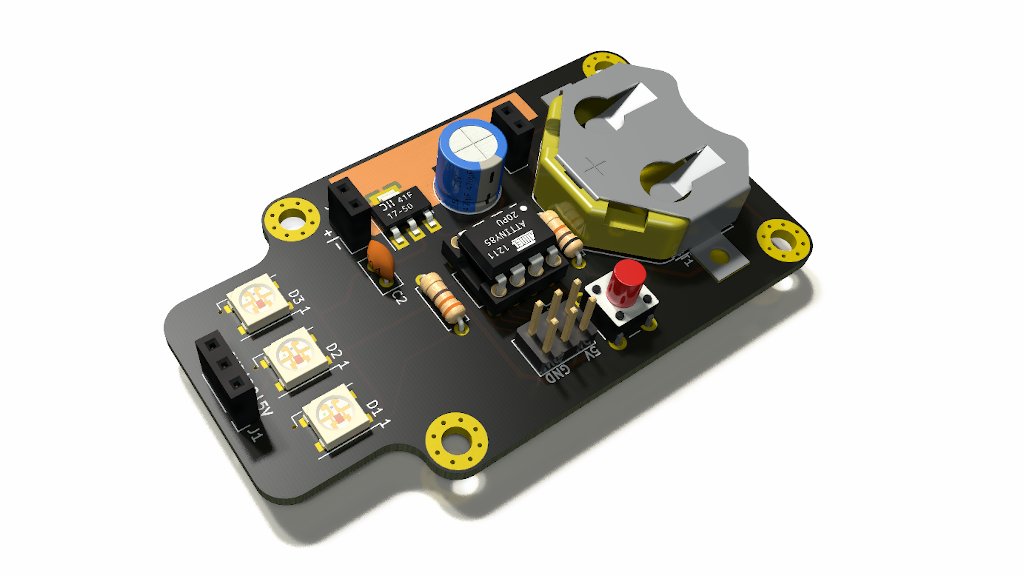 The @hackaday #Remoticon has some amazing talks &amp; workshops lined up over the weekend Details here https://t.co/5ITprQxgzw I'm doing the "Remoticon: KiCad to Blender &gt; PCB renders" workshops, &amp; looking forward to the others too. Join the chat room : https://t.co/09nsZdHVCH https://t.co/kcrJsN3tPN
2 Likes
der.ule November 17, 2020, 9:55am #20