Is there a specific reason they look so different? (Perhaps something related to the “74xx_IEEE” library versus the “74xx” library)?
Or were they merely drawn independently by two different people that didn’t really intend to make them look different?

I expected them to be aliases and therefore identical-looking in exactly the same way that the “7400” is an alias of the “74LS00” symbol.

(I’m designing something that uses a bunch of 74HC253 muxes, with perhaps some 74F253 muxes in speed-critical areas. Neither one of these exact part numbers is in the KiCad default symbol libraries, but the symbol should be the same as the 74253 symbol – or should I be using the 74LS253 symbol?).

I believe they were made by different authors, and the older one uses older symbolism and also has hidden power pins which are deprecated. Feel free to make a copy of the modern one and add your own alias.

IEEE is a standardisation institute, and one of the things they do is make / maintian their style for schematic symbols. Their logic symbols have horizontal lines to separate blocks, and a “generic part” with the neckdown that operates of the other blocks. It’s a plus that this generates extra meaning to a schematic symbol, but often it also results in bigger schematic symbols. 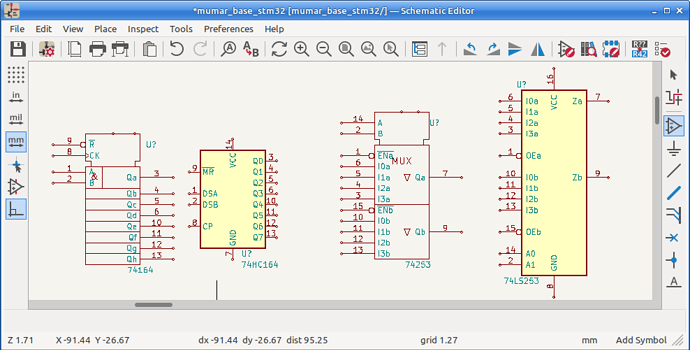 The IEEE symbols do not have a yellow background, and for that I think it is a quite old Library in KiCad. The double negation (circle and bar) is also simply wrong, and such a schematic symbol would never pass the KLC these days.

I have never much used the IEEE drawing style myself. It may work reasonably well for simple logic, but in this world of microcontrollers and FPGA’s it’s hard to add something meaningful with a few graphic lines.

Also remember that schematic symbols in KiCad (Including V5.1.x) primarily are links to libraries that have the graphic presentation. Because of this old symbols that have gotten into KiCad’s official libraries are very static, because even moving a single pin in them will break projects made by users. In KiCad-nightly V5.99 the whole definition of the schematic symbol is in the schematic file itself.

Also remember that schematic symbols in KiCad (Including V5.1.x) primarily are links to libraries that have the graphic presentation. Because of this old symbols that have gotten into KiCad’s official libraries are very static, because even moving a single pin in them will break projects made by users. In KiCad-nightly V5.99 the whole definition of the schematic symbol is in the schematic file itself.

Very interesting, Thank You. I actually thought that a copy of the symbols is stored with the schmatic in the “cache.lib” files, but that’s not the case (I just checked). This is a serious problem.

In the old days there was no caching of schematic symbols at all, and links were directly to libraries.

At some point the [project]-cache.lib system was created, and this does work in the the way you thought. It does cache the library symbols. This is an ad-hoc stop-gap method and it’s not very robust.
For more details, read:

What are the cache and rescue libs and how does the schematic rescue dialog work? (KiCad version 5.x and earlier) FAQ

The purpose of the cache library KiCad version 5 and earlier do not include symbol information in the schematic file format. Without any counter measure changes to the libs would change the schematic without user control (worst case a symbol is deleted from the lib and the project looses its information). This is where the cache lib comes in. Anytime a user adds a symbol to the project it is copied to the cache lib for save keeping (unless the same symbol is already in the cache). If now the li…

Thanks for your reply.
Whether the cache.lib system is robust or not is outside my knowledge.
But I’d prefer a set of design files to be a complete package, including the library parts. Only then will it be safe and portable for the future.
But I’m sure the design team has this in mind and is working on it.

They’ve been working on it very hard somewhere between one and three years ago and it has been fixed back then for KiCad-nightly V5.99. So you “only” have to wait patiently for KiCad V6 to be released