HI,
I would like to install this spice model. I have found on te github library that the n° 5850 was called 74HCT4040. So I downloaded this library but when I open the 74HCT. LIB, there is no 74HCT4040.
How can I find it, in this library or in another one?
I have an iMac with Big Sur latest version.
Thank you for helping me.
Alain

That might be difficult to find. The main purpose of SPICE models for logic families is for simulating the analog nature of the input/output buffers. Therefore, the internal digital behavior is not typically modeled by device manufacturers. Do you need to simulate the behavior of a generic 12-stage ripple counter, or do you need to specifically simulate an 74HCT4040?

Thank you for your answer. I have a lot of 4040, so that why I tried to simulate with the 74HCT4040. But if you know an equivalent or a 8 stage ripple counter for which I can find the spice model , it will be great.

I believe you will probably have to roll your own. It sounds to me like you only need to model the digital behavior. That makes it slightly easier since you don’t need to rig in HCT logic family buffers to the input/output pins, and can just use the ADC/DAC node bridges directly. The approach would be to use XSPICE code models (see Chapter 12 of ngspice user’s manual) to implement the logic diagram from the Nexperia datasheet (duplicated below). 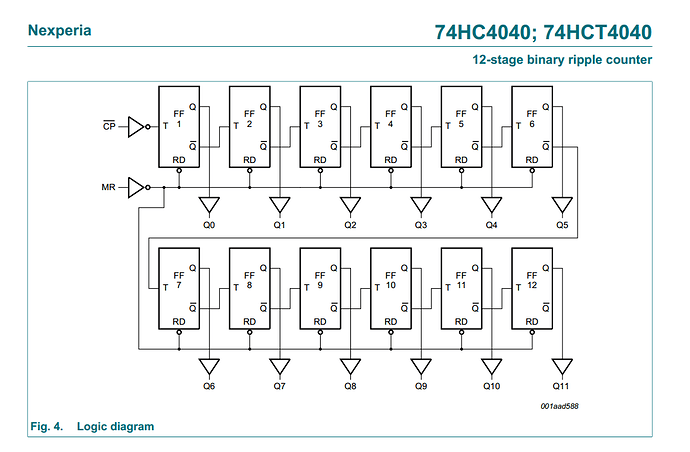 You might be temped to build the logic diagram out of other “off-the-shelf” 7400-series SPICE models (like 7404 and 7473), but I wouldn’t recommend it because of all the extra propagation delays from the cascaded input/output buffers. I suppose it depends on your application…if you’re doing something really slow it might work.

What information do you hope to get from a simulation of a ripple counter?

Thank you both for your answer. I have got from a friend who died recently a lot of material and some equipments. On the one I am working, there is a clk entry going to the 4040, 3 outputs are used. According to the datasheet, I know exactly what they are doing These 3 Outputs are going to a MP7523JN and have an external voltage control signal. The pin 2 is linked to GND and it is surprising as it is an output. The output1 goes to a LM124DG which attacks a pair of PNP-NPN. I think this PCI is working with +15 and 15V. As I am a beginner, I don’t want to try directly so simulation was good for me. I have got in the sale time a scope, but it does not work perfectly. As the IC are on sockets, the option is to go step by step.
Thank you again for your help.

It looks like it’s being used as a frequency divider, and nothing more complex than that.

If it’s a piece of equipment with a model number and manufacturer, perhaps you might want to ask on the Repair forum of eevblog.com about it. People there might be able to provide schematics and information on how to repair it.