This time, however, I might try a PCB mill. As I’ve understood, that one has a tiny drill that removes copper, and thus removing a flat piece of copper from a board (if the design demands it) seems unreasonable. So, I thought, even more of a reason to widen tracks - in fact, widen them so much, so that there is only the border left, which the drill would remove.

I tried looking up something that would do this as a technique for PCB design, but I couldn’t really find anything (such as a specific technique name). Then I remembered I read something in the past about “Voronoi cells”, so I looked that up, and only found this as related:

… with Java software at:

Visolate is an application for calculating machining toolpaths (G-code) for manufacturing printed circuit boards (PCBs) by isolation milling. As an outstanding feature, this calculation is done on ...

In fact, they have a very nice picture that explains it: 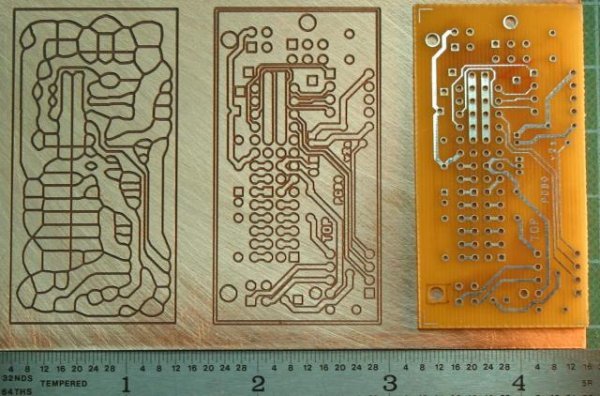 The same printed circuit board manufactured
three different ways: by traditional photochemical process (right); by
mechanical etch with standard outline toolpaths (middle); by mechanical
etch with Voronoi toolpaths (left). The board on the right has also had
additional processing: it has been drilled and tin-plated.

So, apparently, a mechanical etch system would itself calculate the board outlines where it has to drill (as on middle board) - if it is fed a more traditional track design (as on left board).

In pcbnew, I know that I can do a sort-of a track widening with zones - in that I just add a rectangle for a Zone; say what net it belongs to; and then I fill it - and even if it contains tracks for other nets, IIRC the zone fill algo will automatically add outlines, so the zone doesn’t touch those other tracks.

My question is: is there any other approach/algorithm in pcbnew, which could start from a finished/routed design with thin tracks - and then expand them, until there’s just outlines left?

EDIT: Here is a good discussion of pros/cons (mostly cons) of using Voronoi as such:

Things to be aware of when using voronoi shaped traces

I think you could do it with Python scripts. Process pads, compute zones, add them to the board, voila!