Why don't my plugins show up - Windows 10

I know there are a lot of posts about this but what i see is a lot of Linix stuff, and nothing that has helped me figure this out. I am not a python programmer - I would like to understand it better but please don’t give me a bunch of python double-speak.
My understanding is that I should be able to put .py scripts into the plugins directiory, and they should show up in Layout. But they don’t.
In my plugin directory there are a bunch of *.py files (that don’t show up) and there is a folder for another add-in that does work. I have no idea how to get these scripts to work.
Any help out there?
Thanks

Not just any script will work and show up “in layout”.
The requirements for scripts to be plugins are described here but if you don’t speak code (not even python, any programming language), then in layman’s terms: scripts have to declare themselves as plugins so that pcbnew recognizes them.

Now there are multiple reasons why scripts won’t show up as plugins even if they do follow the rules. One common issue is that there is a missing dependency that you need to install separately. Another one is that things are in nested folders instead of being directly in the plugins folder.

Thus each case needs to be investigated separately. Following can help you understand what is going wrong and if you don’t understand then just copy paste the output here and someone will be able to help you. 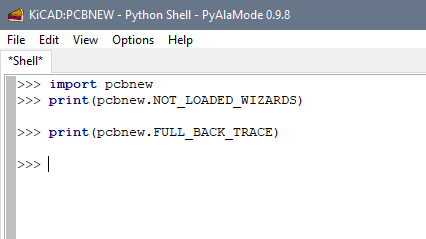 In my case output is empty because I don’t have broken plugins but yours should print something.

Just to add to what @qu1ck said, the default path for plugins in windows (the folder where they should be saved) is:

(in my computer that means: C:\Users\user\AppData\Roaming\KiCad_v5_1_7\scripting\plugins )

or wherever kicad got installed, it is not meant for user plugins, those python files are part of the kicad installation and are used for creating footprints with the wizards or any other useful stuff.