In the KiCad docs what are these unusual/unfamiliar capacitor symbols?

Those symbols to me kind of look like an abstracted Leyden jar. Might come in hand if I ever make a schematic for a Wimshurst machine, but other than that (or other static electricity experiments) I can’t think of many modern applications of Leyden jars. 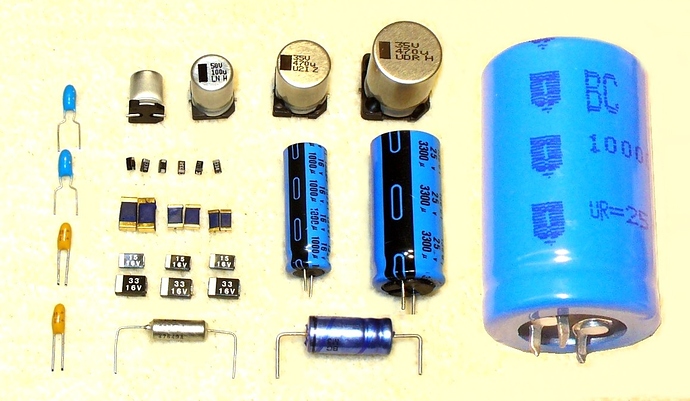 Electrolytic_capacitors-P1090328.jpg1158×674 168 KB
One wire is directly connected to external aluminium case and second is going inside through isolation. Typically the case was not covered by isolation.
1 Like
davidsrsb February 2, 2020, 2:00am #5

You can find this version here 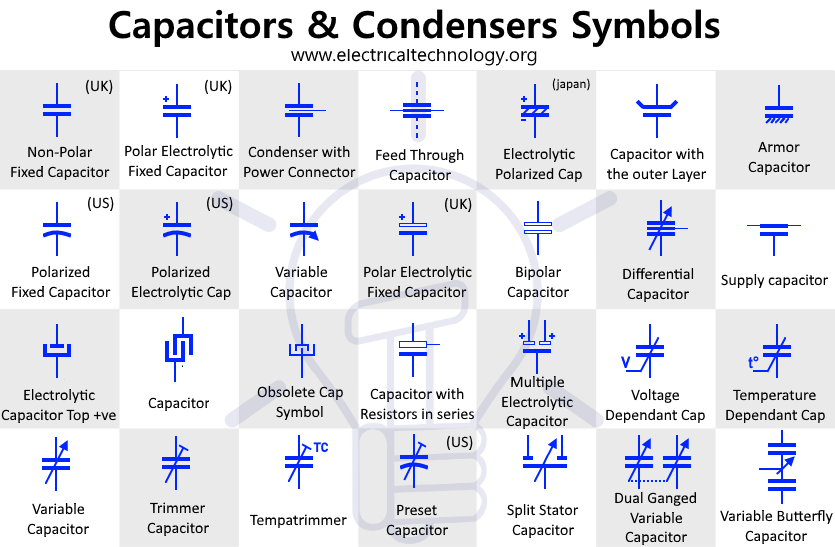 The origin is not explained, but the library names in the OP screenshot look like they might be French

Was it intended for electrolytics, or was that lower element wrapped around the upper element to identify the “outer foil” in paper-and foil constructions? Even today, a few vacuum tube audiophiles want to be sure they connect the outer foil to circuit ground, because of its alleged shielding effects.

Just out of curiosity, can you say when and where that symbol was used? Was it widely accepted, or perhaps limited to a few manufacturers, or a niche application? When did it fall out of favor?

My memory of such things isn’t perfect, but I don’t recall ever seeing that symbol used. My electronics experience goes back to the early 1960’s (yeah, I first learned electronics on radios that glowed in the dark!) so I’ve seen a lot of schematics published in the 1950’s. Of course, most of them came from U.S. sources but I’ve also seen a few from Wireless World and RSGB…

Copies of the 1967 “RCA Transistor Manual”, and the CBS-Hytron “Technician’s Handbook” from 1957 are within my arm’s reach, and they don’t have any capacitor symbols like the example.

Just out of curiosity, can you say when and where that symbol was used?

For me here (in Poland) a little thinner symbol was used “since always”.
I have seen it first time in first electronic book I have ever read (gave that link recently in another occasion):

(yeah, I first learned electronics on radios that glowed in the dark!)

it won’t glow much longer

They are packing less smoke in the new fangled devices though.

I have seen wound axial polyester film capacitors which have one terminal labeled as “outer foil”. It is possible that I may have one or two of these in my lab stock; I can look to include a photo if anyone is interested. For this style of capacitor even 1 uF would have been rather large and I think that 47 uF would have been very unlikely.

A quick google image search shows some photos of film type capacitors on which one terminal is labeled with a black bar; I think this was intended to indicate “outer foil”.

For any type of noise sensitive circuitry such as audio, the idea was that the outer foil should be connected to the grounded or less sensitive point in the circuit. I am not sure whether this design philosophy was ever backed up by test data, and I guess it fell out of favor many years ago.

In my almost 50 years of reading schematics, there have been a LOT of different symbols used for many electronic devices. I have recently started using KiCAD and been very frustrated with the use of symbols never before seen, and/or out of normal use. As such, prior to completing the first design with KiCAD, I had to create/update/select numerous symbols for a custom library of symbols matching IEEE 315-1975, CSA Z99-1975, IEC pub 117.

Please, PLEASE, use symbols that match SOME published standard rather than accumulating a hodge-podge of strange symbols that confuse both experienced and new designers and manufacturers.

Regarding capacitors, my recommendation is style 2 of capacitor shown in IEEE 315-1975 section 2.2.1, one straight line and one arc connected to the leads. That choice is a symbol not used for other types of devices in any standard I have seen. Note that style 1 (two parallel straight lines perpendicular to the leads) is also used for contacts as seen in section 4.3.2 first alternate of the same document.

Regarding resistors, my recommendation is the first alternate (alternating angled line symbol) shown in section 2.1.1. That choice is different than the numerous other components that may be represented by the “box with leads” shown as the second alternate. By getting “sloppy”, there have been many schematics seen in many years of engineering where the operating coil for a relay or contactor was made to look like the box-version of the resistor. At a glance, symbols for Assembly/Subassembly/Element (section 16.1), linear element/network (section 19.2.3), and composite circuit (section 19.2.8) are also very similar, meaning the schematic reader must carefully read the “fine print” to understand the circuit even for resistors if the box with leads is used.

Key is that a symbol library should use consistent and standardized symbology for which there is readily accessible a published (even locally by the KiCAD users if it must be, since some symbols did not even exist when most of the “symbol standards” were created, a good example being an HEMT transistor symbol). Without such standardization, to use KiCAD for “professional” or “quality published paper” or even “shared publication” would require conscientious users to create their own local libraries that do meet a standard, or to attempt to generate a standard that encapsulates the numerous KiCAD library symbols now published.

You are asking for what is US norm.
There should really only be US and European norms. Nobody is planning to add obsolete symbols like the OPs example to the main library

to understand the circuit even for resistors if the box with leads is used.

I have never used any other symbol for resistor then the box with leads, and don’t plan to use other symbol ever

When I see zigzag resistor symbol my first feel is that there is some winding (inductance) in that element. I don’t use wire resistors which stops being resistors at relatively low frequency.

Hi davidsrsb, actually I am using the US standard (which happens to be coordinated with the EU standard, but not identical) as it is the one which I am most familiar, and has been around in some form since the 1950’s, even before I was reading schematics. My point is not that the US standard must be adopted, rather that SOME standard should be selected or published and readily available to users of KiCAD.

Since the question in this series started with “In the KiCad docs…”, it seems the main library might be separated (this user is too new to know) from such symbols, but those writing documentation for KiCAD are not aware of the symbols they should be using.

I feel for you Piotr. To each his own, but we must come to SOME standard for the sake of shared library usage by target KiCAD users. This could include separated libraries for separated standards if that is agreed upon, alternately a given library or given symbols in a common library are clearly tagged as to what standard they do follow.
My example on the resistors and capacitors was the result of some really bad times in the 1990’s as a design and project lead at a large “Manufacturer of Big Dumb Metal, where the Electrical Engineers’ jobs are to make it a little smarter, and to test finished products”. I personally was thrown for a loop by a predecessor that drew relay ladder logic showing normally-open contacts and capacitors identically (except designators, which were sub-standard-size), and did not include the dashed lines to show connections between the leaded boxes that actuated the contacts. There was a separate table to show which contact was actuated by which actuating coil. Further, they had as you prefer, used the box resistor symbol, but used the same exact shape for their resistors. Now you know the why behind my preference, which is only that.

I don’t know if the resistor symbol is the best example for what standard KiCad should or shouldn’t have in the libraries. The KiCad libraries have both. If you want (like I do) the squiggly-line resistors (the other ones look to me like fuses that someone forgot to put the line across) then you use the R*_US symbol. Rene and his coterie have been kind enough to us Yanks to include our variant for (most of) the resistor symbols.

I personally was thrown for a loop

Google translator translates it directly word by word.
Am I right supposing that it means something like being shocked?

The IEC 60617 symbol for a resistor is the rectangle with a ratio of 3 to 1 length to width. I use the IEEE 315 zig zag resistor symbol with the same 3 to 1 ratio, which I think KiCad now provides.

And yes, the IEC 60617 symbol for a relay uses a small rectangle for the magnetic portion of the symbol.
–regards, Larry

As you noted, the IEC is not even publishing 60617, and has made it so fluent as to be a database with an annual subscription, and I could not see a way from the IEEE Webstore to get a hardcopy or PDF snapshot. Somebody at IEC is showing their lack of understanding of what a long term design (products having 20-50 years of product life) needs. As I do not intend to encourage them in such frivolity, I will only buy a subscription when paid for by a client that requires compliance to that standard, or when the company I work for has purchased same. Even then, it will be kicking and screaming if there is not some way to document a snapshot of symbols. As such, my recommendation now leans towards a KiCad specific symbol standard that can, in some form, be downloaded and archived with a project. If not, I will just stay with my ANSI Y32.2 / IEEE Std 315 until something better comes along, and that seems to mean that custom and semi-custom libraries are still going to be the way…

Most of the IEC 60617 symbols can be found in IEEE 315A-1986 and are identified with the “IEC” symbol that is both underlined and has an overbar [which I cannot reproduce here]. You will find the IEC symbols at the end/bottom of the IEEE 315A clauses that are affected with the nomenclature “Add” and “Or”. You can do an internet search and find bits and pieces of IEC 60617 from different sources. I have done this and have found enough to satisfy my needs. You will not find IEC standards at the IEEE. ANSI is the U.S. representative to IEC (and ISO) and that is where you would have to look, or go directly to the IEC website. My recommendation is to follow IEC 60617 as best as possible as it is an “international” standard and although the IEEE still publishes, paper and PDF, standard 315 (that includes 315A) it is no longer an authorized ANSI standard as the IEEE does not update and support it.
–regards, Larry