Hello! Please, help me to resolve the installation issue.
I tryed to install kicad 5.1.5 from repository in my openSUSE Tumbleweed.
I get a message “Nothing provides libGLEW.so.2.1 for kicad package”
I tried to install glew with this library separately. But problem not going away.
What I can do for install kicad?

Did you use the 1-click installer from this page? https://software.opensuse.org/package/kicad

i tried to use YAST in system in OOS repo and electronics repo.
Are installing is different from 1-click install?

Before add a electronic repo I tried to install from OSS repo Tumbleweed.

What does zypper info kicad output? For me I get:

I’m using Electronics because I’m on 15.1 where kicad is not in the main repo. For you it should indicate that it’s in the OSS repo.

maybe I can download some libGLEW.so.2.1 manually and place it in /usr/lib? 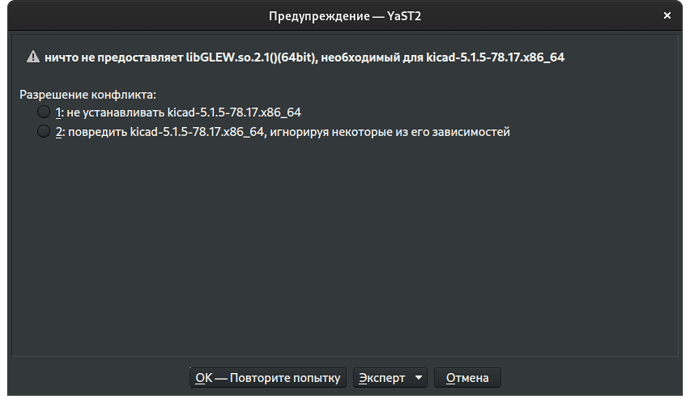 Unfortunately I don’t read Russian but it looks like it is trying to install the latest version which is from Electronics, rather than OSS and this will drag in a newer version of libGLEW which is currently from OSS. So either 1. you should not install from Electronics but from OSS, or 2. you should allow yast to satisfy all the dependencies as it’s asking you. There is a tiny chance that the newer libGLEW will break other packages using it.

When you use yast to install, it will resolve dependencies, but it will ask you if you want to change the “vendor” if replacements have to come from another repository.

When you use 1-click install, it will install exactly the version requested, which is why I recommended it.

And no, you should never install libraries manually. For one thing the path you give is wrong, it’s not /usr/lib.

maybe I can download some libGLEW.so.2.1 manually and place it in /usr/lib?

In general this isn’t a good solution with most Linux distros. It may work but if it works, it may cause other problems. At least it should be compiled for that distribution.

1-click install and install from OSS via yast - same problem.

When you use 1-click install, it will install exactly the version requested, which is why I recommended it.

zypper runs on top of rpm so no use going there.

It looks like you disturbed things by installing libGLEW separately. You should have let yast do it automatically. Disable the Electronics repo which you did not do otherwise it would not have shown the -78.17 package from there. Downgrade libGLEW to 2.1 which is the version needed. They try to install kicad again, this time from the OSS repo.

Install libGLEW but only the 2.1 version.

OK.
I can’t found the 2.1 version (Yesterday I updated the distribution). ver. 2.2 only.
I install kicad with damaged packge (without libGLEW)
I just copyed libGLEW.so.2.1 in /usr/lib64

and…
IT’S WORK!!! Victory.
Yes. it’s not linux way, but I can not make it. I do not have experience. I will waiting for maintainers fix.
BUT!!!
Yesterday’s update broke python-wxWidgets

Tumbleweed is not for people who want stability.