My randomly changing track widths problem is back. This time I am editing a board done by someone else, beefing up power traces, etc. The entire board was routed with the KiCad default trace width of .25 mm by an inexperienced designer. In the screen shot you can see how occasional segments get changed, but entire routes get changed, always from the small size to the larger size. This board was done with V5.0.2; I am editing it in 5.1.9.

Note the round artifact to the left of Pin 3 on the connector. KiCad seems to leave these segments throughout the board on every board I’ve ever done. They don’t generally cause problems. On this board, however, we couldn’t use the 3D view because it couldn’t determine the board outline. With DRC, I eventually found 2 small round segments on the edge cuts layer seven inches outside the board edge. Deleted them; it works.

I had not tried the track cleanup mentioned in the FAQ; sounds like it will save some grief in the future, but it is a separate issue from the random changes in widths.

This is a 6 layer board, and all 5 trace layers have been affected. The changed tracks increased in size to a size previously not used on this board by the original designer, but used by me in the editing process.

Other KiCad users in my organization have reported similar issues. It is not common, but it sure is a PITA.

I will post the screen shot as soon as I figure out how. 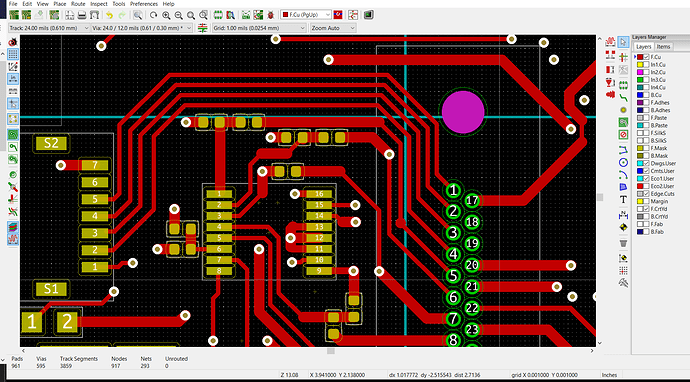 it sure is a PITA.

Maybe time to make a sandwich with PITA bread?

Seriously: I use a 5.99 version and I vary track widths intentionally. I thought that giving your post some sort of response might raise its visibility even though I cannot give you the best answer.

Are you paying attention to net classes and default track widths?

If you are willing to post your project files, that might be very helpful to get an answer. Again because I use 5.99 it would probably be more difficult for me to do that…

Do you have the “edit action changes track width” checked? If so, try unchecking it. When checked, the act of editing a track will update its width to whatever you have selected as the track width in the toolbar (24 mils in your screenshot). 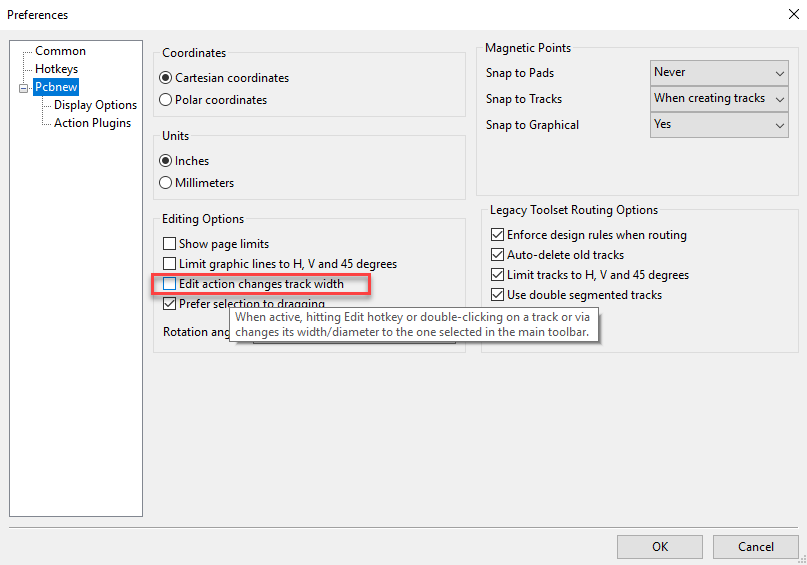 No. That sounded hopeful, thanks. It was random. Not the first time I’ve seen it, but this is a 6 layer board, and the cleanup took a few days.