I am having an annoying amount of trouble figuring out how to edit my schematic page layout. And to make it even more frustrating I am finding it difficult to find any help online as every time I search for “kicad page layout …” almost all of the results have to do with the PCB layout editor, not the page layout editor.

I’ve read through the official doc page but still have a number of unanswered questions. If someone would be able to point me towards a more comprehensive overview of the page layout editor or shed some light on the points below it would be much appreciated.

Thanks for the help!

The Page layout editor is the most un-developed part of KiCad. It is a combination of the limited number of developers working on KiCad, and all the effort going into the PCB and Schematic parts. It is also not a very glamorous part to work on.

Bitmap2component is one of the programs accessible from the KiCad project manager.

I have not used the Page Layout Editor much myself. I once used it to delete most of the graphics of the frame, and that’s about it. My best guess though is that those other things you seek for are simply not implemented.

In v5.1 it’s like Paul said. For version 5.99, the unstable development version leading to v6, it received some love and the editing system was changed considerably following the schematic editor. It’s possible to change the visible units and the grid.

Handling image import is the same in both versions. In the said Bitmap2component subprogram it’s possible to output kicad_wks file which you then can append to your worksheet file. But I haven’t used that so I can’t tell if it works as we would expect.

Hello
Don’t think you can change to inches in Layout Editor. Seems like it is in deference to A sizes being in mm.
I did have major problem laying out as I would create the boxes and type in the
text to verify for use in add text in Eescheema. Would not line up and finally dawned on me the Layout Editor uses mm and Eescheema was in inches for me. Finally compromised using the string fields and enough room in boxes to manually enter text in Eescheema.
There is limitation of 4 comment fields.

Did not find way to turn off grid.

You can open the svg in Inkscape and I use extension Export JPEG and then . insert bitmap. Then you can edit it for size 1/2 or scale. 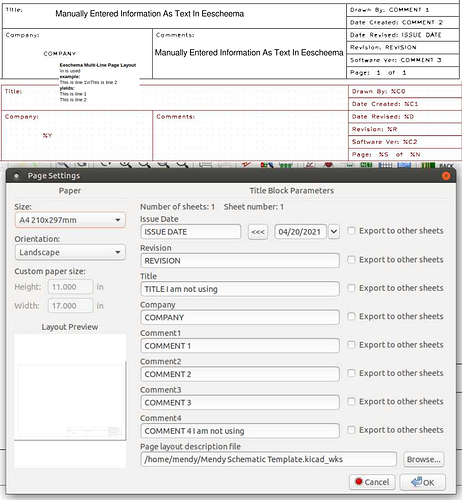