I would like to shrink this symbol so that it takes less space.
The problem is that if I try to shrink the rectangle first, it doesn’t want to set it on the letters and the rectangle goes completely out of the pin area.
A workaround is to move the pins first, but again there are problems. Once the corner handle appear, it seems obvious that I want to interact with the rectangle. But after moving by 1 grid, there is a small popup asking me if I want to select the rectangle or pin 1 (or the closest pin).
It doesn’t look like an intended behavior. 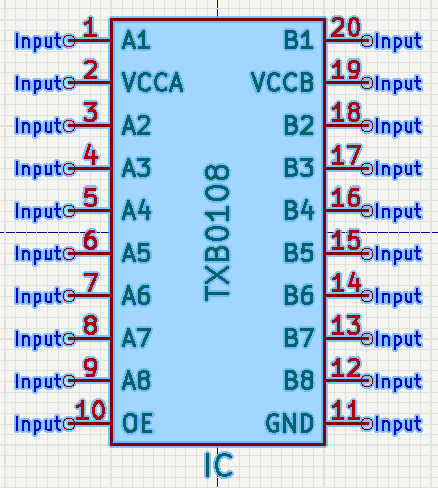 Those popups are quite normal in KiCad as a part of the selection process.

But why do you want to make you schematic symbols even smaller then that? You are both making it more difficult to edit because things start overlapping, and you can not make any kind of separation between different pin groups.

Below the standard 74xx541.
In width it could have been a bit narrower (Both pin length and rectangle) but a bit of vertical spacing between the “An” inputs and the “Gn” control signals is a good thing. 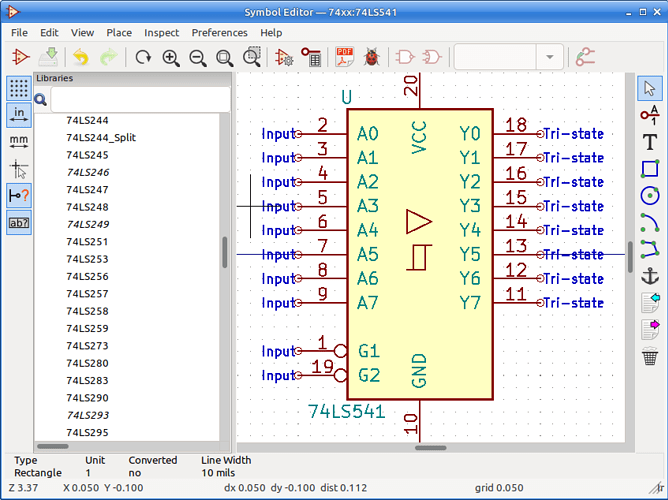 Also, using the pins in the order as they are on the package is a bad Idea. Schematics are for clarifying the working of a schematic. Not a PCB representation. Grouping “G1” and “G2” (with pin numbers 1 and 19) makes schematics much easier to read and understand, and this helps in preventing errors.

I used to do the same things as you, until I realized I spent endless hours finicking with small details that are not that important to begin with, and the end result was not much better, or sometimes worse.

In a previous PCB program I had it was almost mandatory to re-design each and every schematic symbol. They made a big mess of them. But in KiCad the library symbols have become quite good, thanks to the KLC there is an uniform style and symbols are relatively compact, without getting cramped.

Try this for your editing.

The problem is that if I try to shrink the rectangle first, it doesn’t want to set it on the letters and the rectangle goes completely out of the pin area.

Hi,
The rectangle, the letters (pin description) and pins are all separate items and need to be moved independently of each other. Sometimes you may need to change your grid to get the letters in the right position.

Don’t forget, if you are changing pin positions, make sure they will still align with the grid you are using on your schematic sheet.

You seem to be using v5.99. It indeed feels buggy here. Please report.

Ah yes, those fat lines with halo’s around them suggest KiCad-nightly V5.99…

A view of a symbol in the Schematic Symbol Editor of KiCad-nightly V5.99: 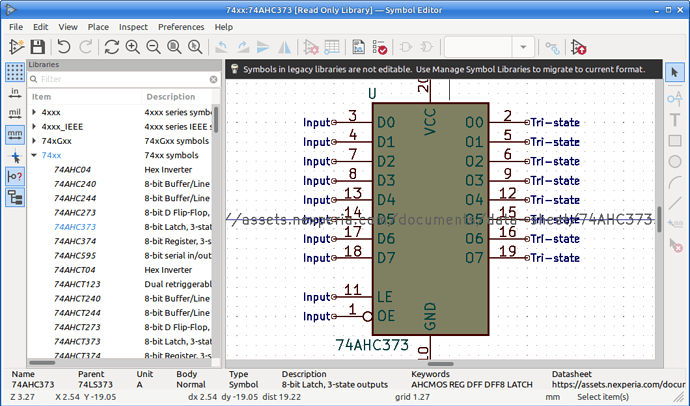 Notice the info bar at the top:

Symbols in legacy libraries are not editable. Use Manage Symbol Libraries to migrate to current format.

So apparently the default libraries for KiCad-nightly V5.99 are still in the old format. To get around this I took one of the mini projects I use to test drive KiCad-nightly V5.99, converted that library to the new format, and now it looks like: 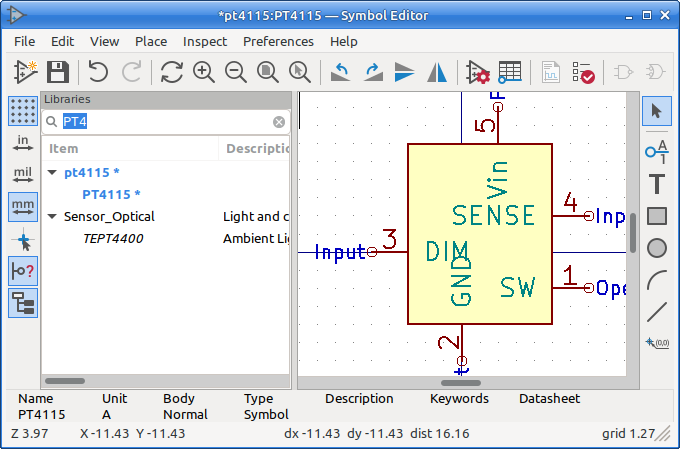 And then, when I click on the rectangle, it’s outline changes and I have 4 resize squares in the corners, and I can drag any of the corners to another grid point. 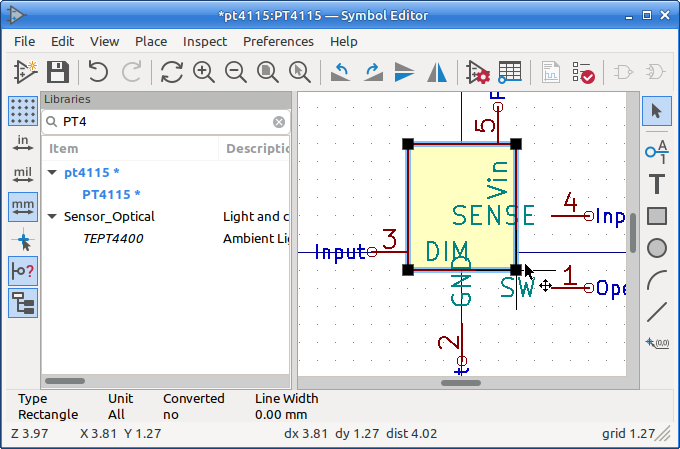 [Edit ]
Only after eeliks comment below I realized that you were describing a bug that the resize corners do not work properly. I can both grab the box near it’s center and move the whole box, or grab any of it’s corners to resize it. It all work intuitively for me. (From a nightly just a few days old). So update to the latest nightly, and post full version info if you still experience the bug.

I just updated my Windows nightly build and don’t see the bug. Maybe it was the selection disambiguation problem mentioned in some other threads?

Symbol Editor: Dragging and moving the corners of rectangles and polygons...

Description When selecting a rectangle or a polygon in the schematic symbol editor, dragging of its corners does not always work...

Many thanks for the comments, and sorry to have forgoten to specify the
version I’m using. 5.99 on Ubuntu, automatically updated everyday.
And apparently it has been updated because it works fine today.

What do you mean with “apparently”?

If you follow Seth’s link above to Gitlab, then you can read on the last line:

And if you compare actual times instead of that annoying and vague “one day ago” then you can deduce there are 37 minutes between this issue being reported and “fix committed”.

I once created an issue on Gitlab, that was fixed with a commit even a few minutes quicker, but I can’t remember which one it was. I’ve made approx. 30 bug reports.

What do you mean with “apparently”?

“It” being his computer that has apparently updated itself today.