Hello,
For the very first time I am completely stuck and don’t know how to resolve the problem.
I have a set of 4 resistors (shown in the screen grab), R11,R12,R16,R17 that are connected and then connected to one pin on an IC chip as shown.

The problem is that NONE of the components (or at least not the necessary pads) show up in the Netlist so I cannot find any way to make a complete net out of them. I have carefully checked and the schematic is correctly connected. It’s as if KiCad is ignoring or unaware of the Net formed by the 4 resistors and thr pin on the IC chip.

How do you fix this? Thanks! 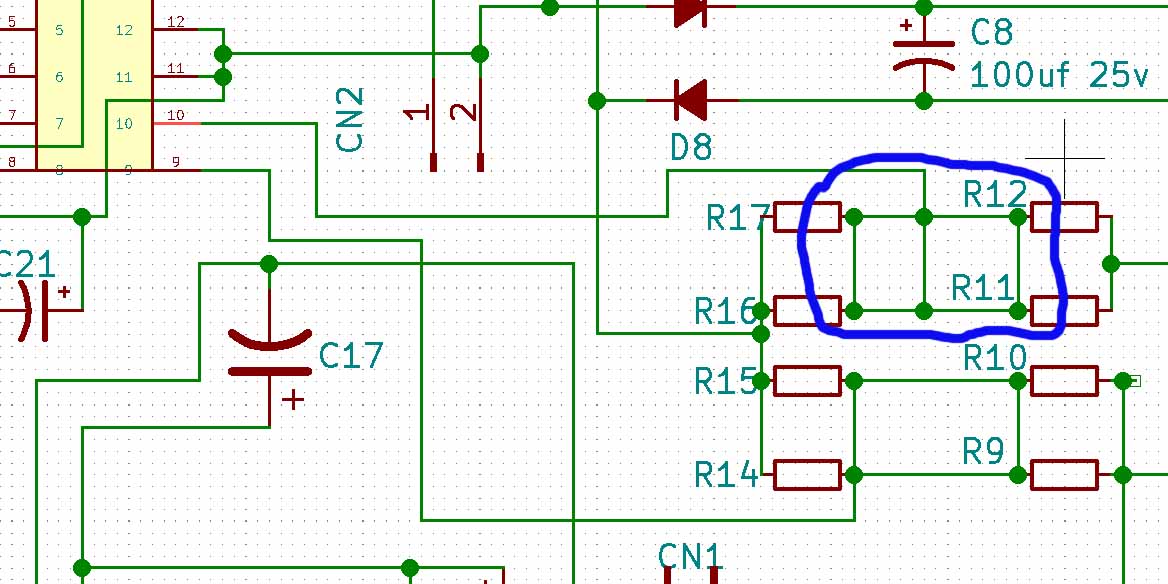 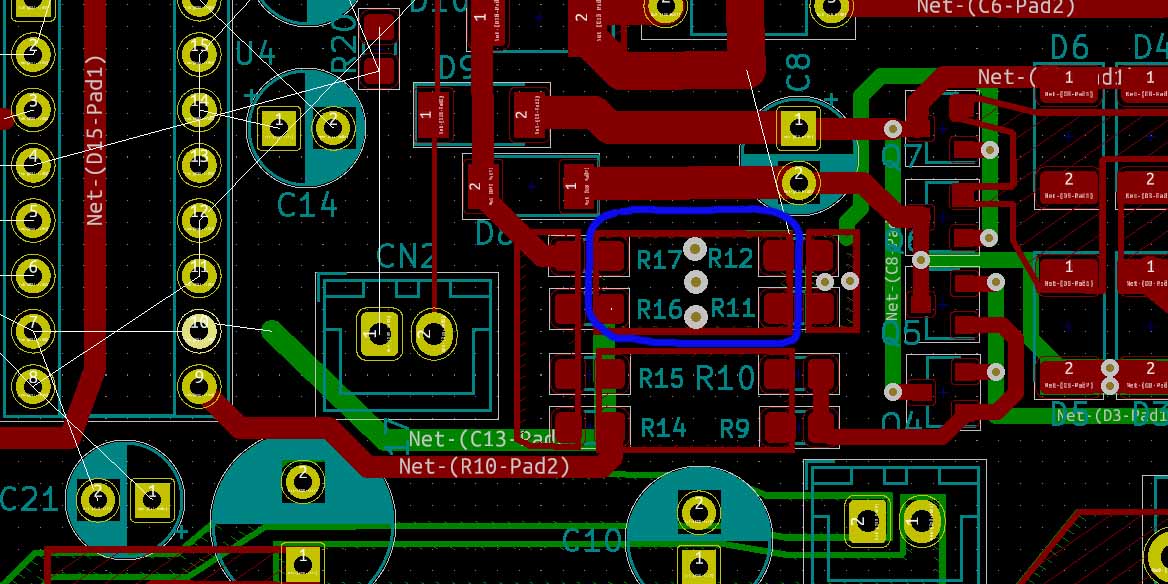 You’ve drawn some kind of a rectangle in red over the pads.
Is that rectangle on the Front Copper layer?

I think you confused yourself because you have more connections than needed in the schematic. If you want to keep it for clarity for YOUR purposes that’s fine. The PCB is going to see these as redundant and therefore extraneous.

Those are not extra connections. They are Vias with connections to traces on the other side of the PCB

Not sure what you are trying to say?

Can you explain any “Harm” with the schematic as I have it? How does that particular annotation change the electrical properties?

Are you saying it alters the netlist in an adverse manner?

Not sure what you are trying to say?
Can you explain any “Harm” with the schematic as I have it? How does that particular
annotation change the electrical properties?

It doesn’t. As far as the netlist is concerned, this: 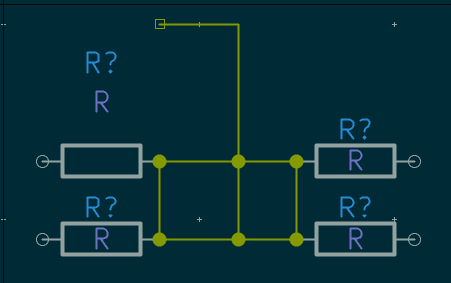 produce the exact same netlist from an electrical perspective, though it might change which pad ‘wins’ as far as naming the net goes.

Are you saying it alters the netlist in an adverse manner?

No. In both cases you’ll get the same netlist. From there, the PCB layout software doesn’t care how you connect things as long as there is at least one connection for every net. You’re free to have multiple connections per net.
In your case, looking at the PCB, you appear to have a rectangular track on the same layer as the pads connecting all four.
So from the perspective of the ratslist/unconnected net checks, all four resistors are connected and the only remaining unconnected net is the one shown by the white line from the top right resistor’s pad to the track above C8.

Are you having issues connecting the pads to the vias? If so, that’s probably because they were put down as ‘standalone’ vias and so aren’t assigned to the right net, so the router won’t let you route a track to them.

Schematic should be as simple and as easy to read as possible. The schematic in the second screenshot of gsocker is better even though they are functionally identical. You should almost or exactly never have redundant wires in the schematic.

IMO there are situations when it can be beneficial to think about the layout when drawing the schematic, but you should clearly understand why, when and how you need to do that. You should first learn to draw purely abstracted functional schematics without considering the layout, or at least understand the principle.

As far as the netlist is concerned, it probably looks something like this. 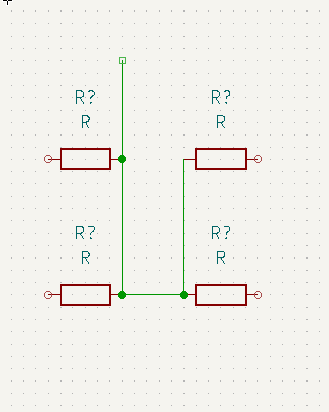 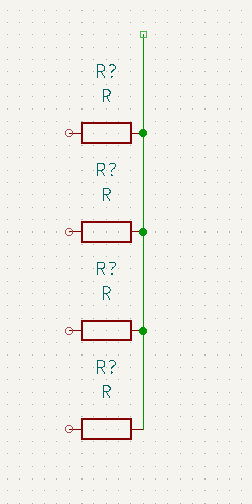 The green dots in the schematic do NOT represent physical vias.

Vias don’t show in the schematic editor as they are not a circuit component. You create them as needed when laying traces.

Start drawing the trace you want, then press V to place a via on it. Repeat this until you have the vias you desire.

Alternatively, place them separately, as you have done here, then right-click them, choose “Properties”, and assign them to the same net that your resistors are connected to.

Regarding, “Can you explain any “Harm” with the schematic as I have it? How does that particular annotation change the electrical properties?”

The harm is coming right now. you are not getting what you wanted. The designers probably never anticipated your method.

If you want to have vias with nets going to them perhaps there is a way to make a via a one pin part and then put that part into the schematic. It will then have a reference designator. I know mounting holes exist in KiCad so it is probably the same methodology.

I am new enough to KiCad that I have not yet made a foot print and can advise no further.

Let’s go to the ridiculous…
Say you have a lot of current involved and you need to change from top to bottom and then return to top and you need many vias (for the current). Will your schematic look like this??? 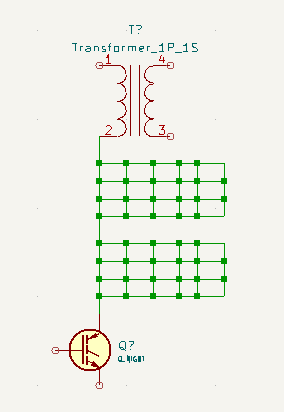