I have a small PCB layout and I’m using the Texas_SWRA117D antenna (from the standard footprints) … all was working fine until I ran a DRC check, there were loads of “track too close to copper item” errors relating to the antenna and a whole load of things that were nowhere near the antenna.

It didn’t matter if I moved the antenna … but all was ok if I deleted it.

My design is centred on (0,0) for ease of symmetrical layout … but I discovered that if I move the entire layout to a different place on the sheet then the DRC runs fine.

I’ve found a few issues reported before about polygons, so I’m guessing that the antenna footprint (which uses polygons) is manifesting some kind of issue where it thinks something related to the antenna is at fixed co-ordinates (near 0,0) when it isn’t … it doesn’t matter where the antenna is on the sheet.

It’s easily reproducible … just put the antenna and another component on a schematic, import to a PCB and put the components around the origin, then draw a couple of tracks around the area (tracks between -7 and +7 do the trick for me) … DRC fails … move the whole thing to the right and down … and all is ok???

Is anyone aware of this?

Two screenshots attached … the first is with the design roughly around the origin (cursor was near the resistor when I took the screenshot, notice the co-ords), you can see the DRC issues.

The second I’ve just picked the whole lot up and moved it (cursor in similar place, notice co-ords) and you can see there are no DRC issues. (will have to be in a follow-up post as I can only post one image.) 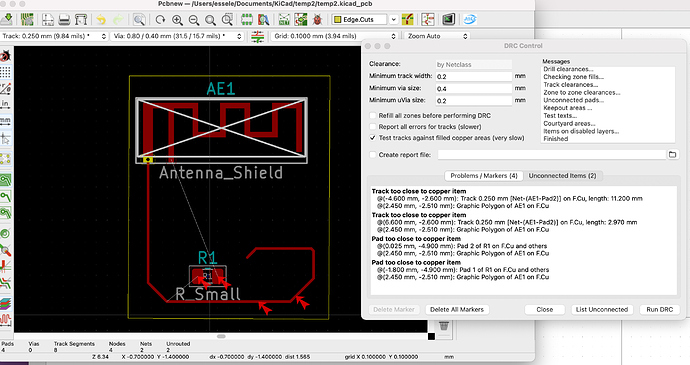 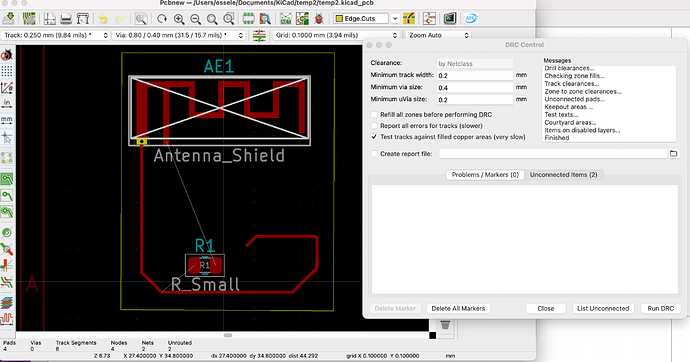