I once again struggle with the efficiency of my approach on how to carry over designs of subcircuits between different designs and wanted to see if someone came up with something better. As far as I remember there was an idea to have a library for modules like we have now for symbols and footprints but as it is still far away (I think so at least) I need something for the time in between. I was thinking about creating a small plugin for this purpose but maybe this isn’t even necessary if someone already has a well working process.

My process for now is as follows:

So the whole problem is the (re-) connection of schematic and layout. is there maybe a way that this information does not get lost in the first place?

The plugin Save/Restore Layout is what your are looking for. 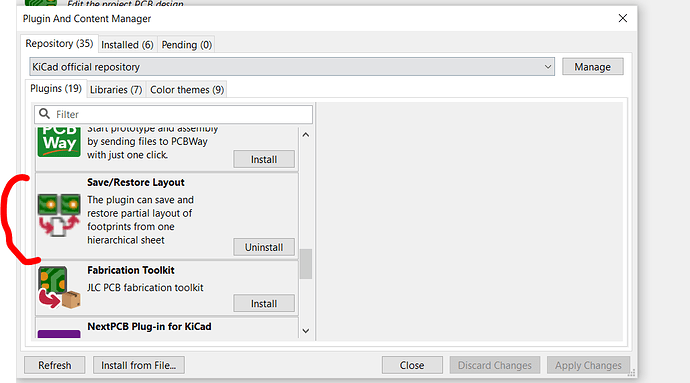 you are absolutely right. sadly it has a bug right now so I can’t save my layouts but once it is fixed I can simplify my process with it. thanks a lot!

Hi, I’ve been talking with the plugin owner about this bug.
If you want you can do a simple patch to get the plugin to work.
in the file :
save_restore_layout.py
in the function def get_sch_hash(sch_file, md5hash): should be line 62
at the beginning of the function you can add this line :
sch_file = sch_file.replace(“File: “,””)

this is a way to get the plugin to work until a fix is released.