Hi, I have designed a split keyboard (based on Lily58 design) and I’m trying to see if it would be possible to manufacture it via Seeed Fusion service (for others to buy from there). I’m trying to see how much it would cost but I’m confused about how should I prepare the design for assembly.

The first difficulty is that the design is reversible: a singe design is used by both halves, soldering components on opposite sides. I’m thinking that to have it assembled I would need to specify that half of the boards should be assembled one way and the other half in the opposite way. From Seeed’s documentation they mention that you could have “different designs” in the same gerber, but I’m not sure that is the case since the design is the same for both sides (only different assembly). From what I understand, the only way would be to panelize the design myself and then somehow specify different designators for each half, as they state here: 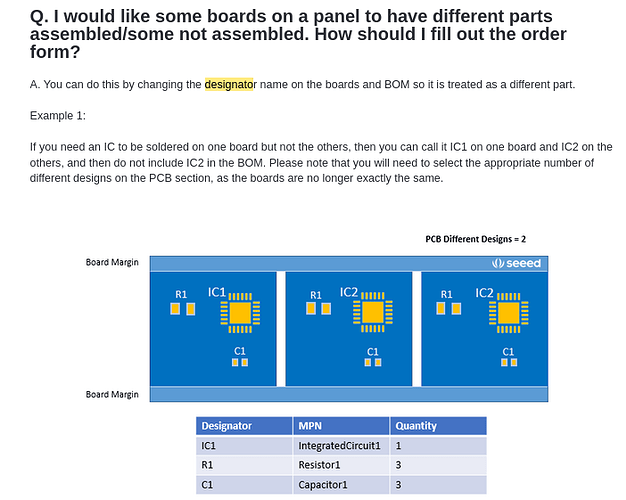 Am I correct that this is the proper approach? Or is there another way to specify different placements for the same design? If I have to create the panel myself (I could use the KiKit plugin), can I then modify the designators for each half of the panel in KiCad?

In more general question: do you think this is the right approach for PCBA in this case? Maybe the reversible PCB is a good idea to minimize cost for DIY manual assembly but if I have to go through this trouble for PCBA maybe the reversible part is only adding complexity (I guess the alternative would be to have a big non-reversible snappable PCB for the whole keyboard).
What do you think?

Am I correct that this is the proper approach? Or is there another way to specify different placements for the same design?

Well, that may be the way one manufacture wants to have it; and I would NOT use that manufacture.

The RefDes is fundamental feature of the electrical schematic design and should have nothing to do with manufacturing process.

What happens if the design has an actual IC2 to be populated every time???

That’s an interesting strategy, but error prone and inferior. Why not just send two different BOMs (and maybe pos files)? That’s how it’s normally handled, I think. Then it’s possible to handle text files manually instead of trying to manage two designs. “Assembly variants” is a feature in most of advanced EDA packages and that doesn’t mean managing two different boards to be manufactured, although it was brought to my attention recently that silkscreen variants are possible at least in Altium. See https://gitlab.com/kicad/code/kicad/-/issues/2131.

Thanks for the suggestions but I’m interested in Seeed’s service since I’m considering their Groupbuy option for selling the product to others, so I need to work with their requirements.

From what I understand the process is to submit a panel with both halves but a BOM for individual PCBs, selecting “number of designs = 2”. So if the halves are to be populated differently they need different designators. The alternative I can think of is to submit the BOM from the complete panel (“number of designs = 1”), which would be different for both halves. But in that case designators will be duplicated in each half.

The second option is to directly change the design so that in fact it is different for both halves (remove the “reversible” approach) and just submit one design for the whole keyboard with unique designators. This is not ideal for me since though as I would have to rework everything I have.