My track widths and Via sizes disappear when closing

I started testing / using Kicad the day before yesterday, and have already successfully made a PCB with it, using my own footprints. I am using three track width: 1, 2 and 3 mm. I add them to the list in Board Setup / Tracks & Vias. No problem so far, and if I close the program and after starting it again choose the same PCB also no problem. However, when I start a new board, my sizes are gone. In the track width drop-down menu only the default 0.25 mm is there (plus, of course I can do the settings all over again).
However, I would like my settings to be permanent, so I can start a new project and from start have my track widths and via sizes available in the drop-down menus from start.
Can someone please instruct me how to do this? 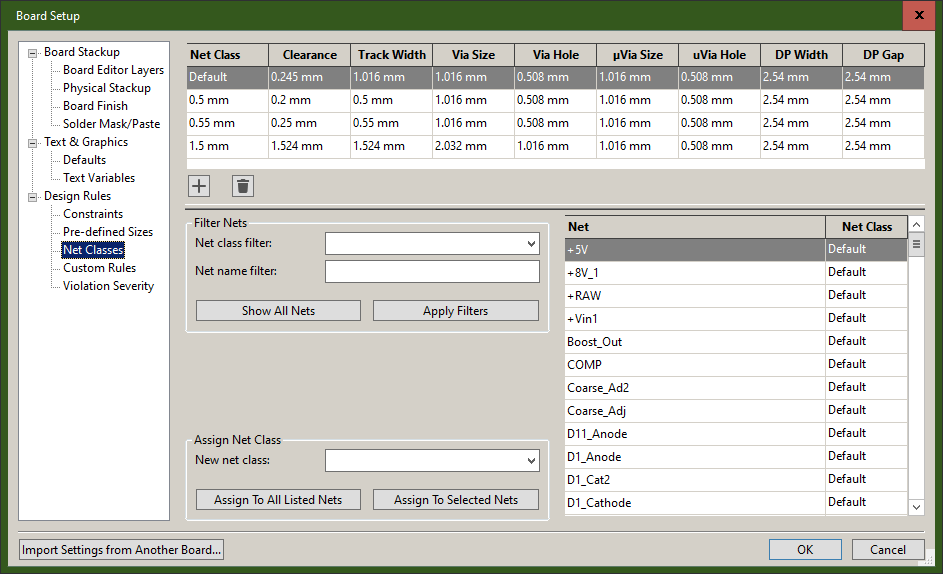 I find that dealing with track widths could be more convenient. Normally I am using custom widths all the time.

Please see help>About KiCad>Copy version information and paste it into your next post. I am using 6.0

So far as I know the only way to pre-set track widths is with File>Board Setup>Net Classes as shown in my screen shot. I may be missing something.

Thanks. As I said, I am a real newbie. I use Pcbnew version 5.1.12.
I have used an old DOS software (Boardmaker) that I bought in the late 1980´s, it works just fine in Ubuntu with DOSBOX. I need to get small series and prototype boards really quick when developing new products. I cannot wait for days for someone else to produce them. So in Boardmaker I “export” as .P01 (PDF) and print on overhead film, use board covered with UV sensitive film, light, develop, etch and drill myself. Not many minutes after finishing the layout in Boardmaker I have the PCB ready in my hand. I have my schematics printed on paper, so I want to use Pcbnew directly, without first having to make the schematics in KiCad.
When I start Pcbnew there is only one NetClass, Default. Even if I add new Net Classes (se image) the drop-down list in Pcbnew still only has Track: 0.25 mm and Edit pre-defined sizes. There I can easily add 1, 2 and 3 mm or other line widths, and they will then appear in the list. But only for that particular project.
But as I use the same line widths in all my projects I would like to get this permanent. So, when I start a new project and click the button for track width, I want to be able to chose those width directly, without having to add them for every new project. And the same with Via Sizes. I never use the default (dia 0.8, hole 0.4) but some other sizes that fit my needs.
In the old Boardmaker I could set up to eight track widths, and eight via sizes, and when I opened the program to make a new PCB I had access to my personal sizes directly. This is what I want. However I need KiCad to get the gerber 174 files when I want others to produce my PCB:s in larger numbers, my old software has a format (D) which most pcb manufacturers cannot use.
Is it possible? 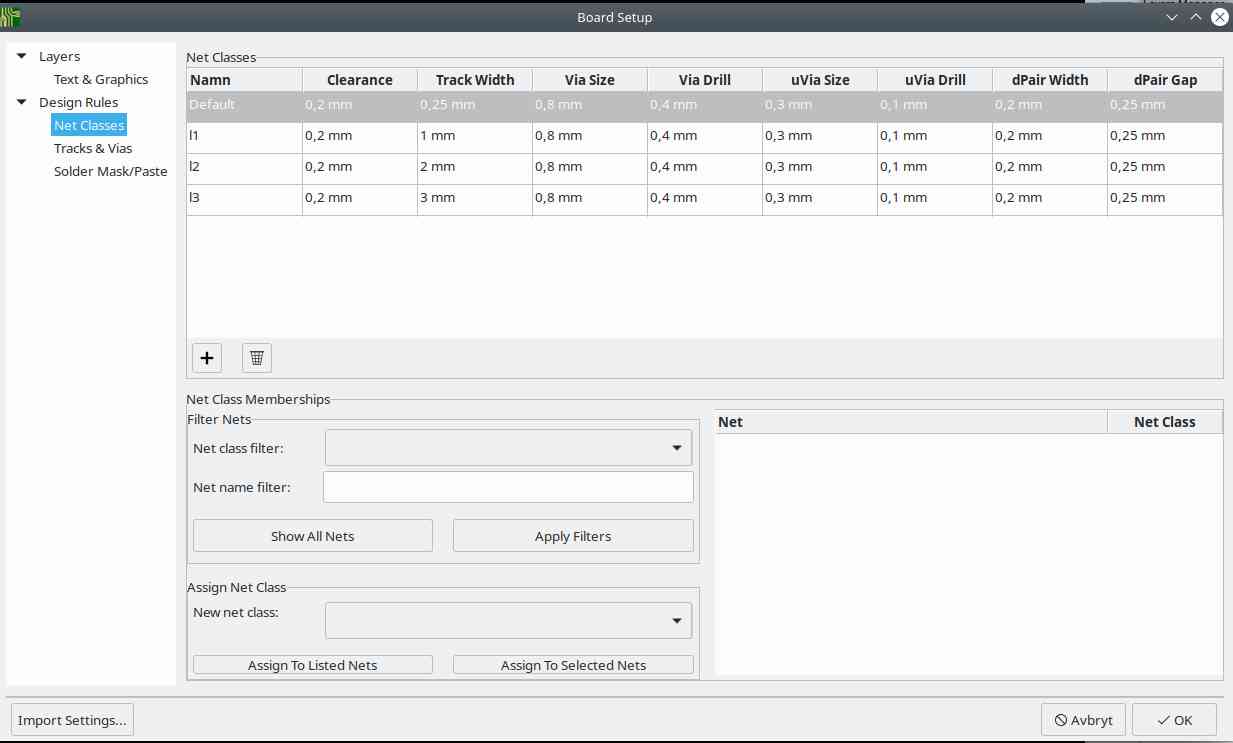 I want to use Pcbnew directly, without first having to make the schematics in KiCad.

Big mistake. Working without a schematic you give up 90% of what KiCad can give you.

But as I use the same line widths in all my projects I would like to get this permanent.

I have done my default project. It is empty, but whenever I find something I’d like to have permanently I edit it in that project. Then I start each new design by copying that default project.
In KiCad v4 instructions (I have read) there were information about KiCad default project file used whenever you select New Project in menu. But it was a file contained in KiCad directory located (in Windows) in Program Files directory and Windows ‘don’t like’ anyone is editing anything there.
I don’t know if it was changed any way in V5 and V6. As my solution works for me I didn’t searched for the other one.

The best way is to save your baseline project with all your desired settings and use it as a template. If you look at the templates provided with KiCad, you will see they are complete projects with a ‘meta’ folder containing a .png icon and an html page with some background info about the project. If you save a project in your own template directory you can create a new project with your baseline settings already configured.

Thanks. As I said, I am a real newbie.

I want to use Pcbnew directly, without first having to make the schematics in KiCad.

I’m learning to ride a new motorbike. I’ve never ridden this motorbike before and what to learn to do it my way by sitting on the handlebars and see where I’m going in a mirror. I’m pressing the pedals with a stick. Its not working very well …

Seriously though, work through a tutorial to see how the software is designed to work and then start to break the rules. KiCad works best from a schematic. Most people who want to go straight to pcb say its ‘too simple to waste time drawing it first’. If it truly is simple, it will take only a few moments to draw. If it is more complex, producing a schematic first forces you to address design decisions ahead of trying to fix them in the layout. Discipline and rigour. KiCad 6 will make layout only designs easier but I would still learn to do some designs the conventional way first.

@stefanberge: In the board Setup window (your picture) try the button “import Settings…” on the bottom left of the dialog-window. It should allow you to copy the settings from your last project.

Perfect!
I just started “New project”. it. Then, without putting anything in the main window, I clicked on the upper left button (Track: 0,250…) and then “Edit pre-defined sizes”. There I added all sizes (both lines and Vias) I wanted for my future projects, and finally saved the project as “template.kicad_pcb”.
So, when I want to start a new project I click the Open existing board button and choose template.kicad_pcb instead of clicking the New board button.
And then, before working on the project, save it with a fitting project name.
Thanks! This was the best solution. Simple, safe and efficient. Not many seconds to do and it works.

See my reply to Piotr…

Working with net classes needs several steps.
First you have to setup the net classes themselves (or import them from another project). Then you also have to assign net classes to the nets. This is done with the lower right part of the same dialog. BobZ has made net classes, but has (not yet?) assigned any (but the default) net class to his nets: 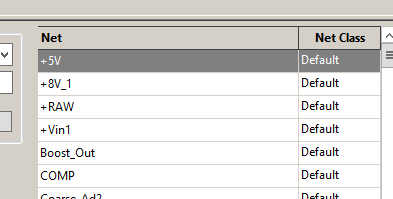 In your screenshot this area is still empty, which means you do not have a netlist in Pcbnew yet, and you first have to get it from the schematic before you can assign the net classes to you nets.

This is for the current stable (V5.1.x) KiCad version.
In the new (almost released?) KiCad V6.0 a new method has been added and you can also setup the net classes from the schematic (Eeschema / File / Schematic Setup / Project / Net Classes).

BobZ has made net classes, but has (not yet?) assigned any (but the default) net class to his nets:

Yes that is because this whole design is relatively low voltage, and the net classes do not reliably correlate to current flow or available space. I don’t like to use a 0.25 mm track if I have space for a 1 mm track. (unless I am worried about capacitive noise coupling; that is rarely a problem in my low voltage designs.) I often vary the width of a track along its length according to pad dimensions and available space. So regardless of what the net class lists, I am almost always using custom track widths.

The “Pre-Defined Sizes” is a separate mechanism from the Net Classes. Learn both methods, and then decide which fits your use case best.

sorry, more difficult than what I found out myself, see my reply to Piotr.

Well, as I said in my first entry, I make one-layer PCB:s so I can produce new prototypes very quickly (half an hour after the layout is ready.
As I was told to learn how to ride a motorbike before I do, I did as I was told. That is, I made the schematics first, and exported the netlists to make the PCB. A disaster. The components were placed where I did not want them to be, and the program forced the use of two layers. I could of course re-arrange everything until I got the components in the right position, erase all tracks on the top layer and place them on the bottom layer and finally, after a few hours, get the same PCB layout as I had already done manually in a fraction of the time.
So, John, I will keep on riding my bike sitting on the handlebars and see where I’m going in a mirror. I’m pressing the pedals with a stick. It works better and I get to where I want in a fraction of the time.