Mirror PCB only, not the whole page when plotting to HPGL

It’s easier to place the PCB near the origin when using a pen plotter to draw it.

However, when I plot a mirrored PCB with pcbnew, it also changes the PCB position (it mirrors the whole page).

So, in order to get my PCB near the origin, I have to place it at the right bottom corner. This solution doesn’t seem to be the standard way of doing that, because the PCB needs to overlap the page borders, as seen in the screenshot below. 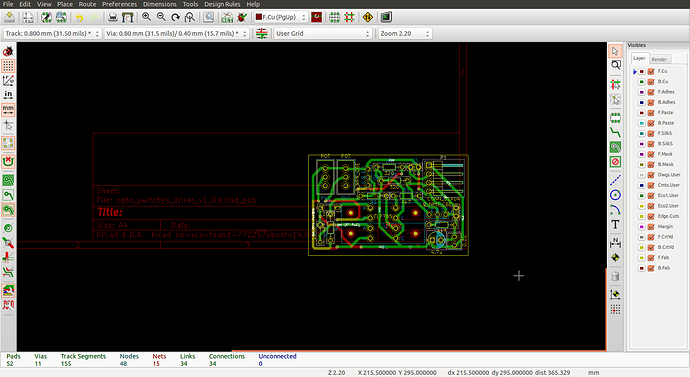 I also tried to flip my board over and place it at the origin, then plotting it without mirroring. But that’s not the best solution either. I can’t figure out where exactly is the origin and the PCB again needs to overlap the page borders.

Inkscape doesn’t seem understand some HPGL commands used by KiCad so I can’t use it to fix the PCB position. EAGLE has an option to offset the PCB origin (the actual PCB left bottom corner). Is there anything similar in KiCad?

I’d suggest some playing with the Worksheet Layout Editor:

The page settings give you control over the actual sheet size - grey border in editor area (in PCBnew, this setting is not stored with the worksheet design).
The general options give you control over the origin of the drawing elements on that sheet - grey crosshair at top left border.
Unfortunately, you can’t change the orientation of the coordinate system.
I would try to create a custom sheet that fits/matches your plotter & use case (no need for anything but the border) and go from there. 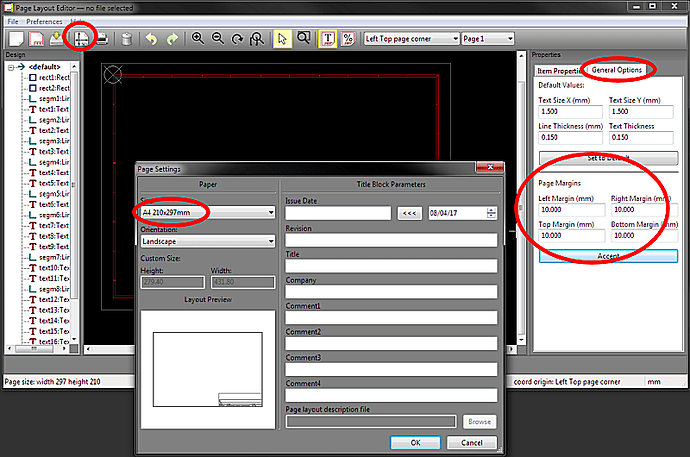 You should be able to load the custom sheet design in PCBnew via that ‘Page Layout Description File’ field at the bottom of the page settings dialog (greyed out in the worksheet editor).

PS: if you’re able to run the OpenGL canvas [F11] instead of Legacy [F9] you should be able to see the grey sheet border in PCBnew. I can definitely only see it in OpenGL in Windows7, 64Bit with a nightly KiCAD from start of February.

[EDIT]
Just tested some stuff and without anything in that worksheet file PCBnew defaults to the default layout… to have nothing appear I had to put an empty text string into the file. The ‘page size’ is not coupled to the worksheet template though - you have to set that in the page settings dialog in PCBnew (again).
empty.kicad_wks (201 Bytes)

As nice as all this is, but the notion of a page like it is now in regards to PCBnew is really really wrong.

The template you provided works well here.
I can also see the grey sheet border now.