I have downloaded and installed from the suggested archive a 5.1.4 version of Kicad and I’m on Linux Mint 18.3 64_bit.

When I try to place a through-hole pad onto a previously drawn ‘construction line’ the black of the hole covers over the line so I don’t know where I am releasing the pad.

Furthermore, the magnetic snap either doesn’t work or is not possible.

I want to create a bunch of lines on a document and the place pads expecting to be offered a suggested snap at the end of line or in the centre of a line.

Also, is there a way to change the width of a line as you use it ? In other CAD packages I might select a line tool and then press ‘tab’ to have a popup appear in which I can change the colour and the width etc.

Also, how do I make a footprint ‘origin’ to be the centre of ‘pin 1’ or any other part within the footprint ?

Lastly, when perusing a library file, is there a way to see a thumbnail picture of each component ? I would identify and choose better with a picture rather than some technical title.

Thanks in advance,
Steve

Give a link to a datasheet or dimensions drawing of an example.

the black of the hole covers over the line so I don’t know where I am releasing the pad.

You might want to work through Tutorial: How to make a footprint (From scratch)?

Tldr: there is a user grid so no need to work with ridiculously small grids. (And the array feature)
Colors of elements are dependent on their layer (necessary in an ecad tool that uses 2d rendering to work on a 3d object)
Line widths are changed within the line properties dialog (right click properties or hotkey e). Defaults are in the preferences menu.
to set the origin after the footprint is done use the anchor tool (right toolbar, or place menu).

Furthermore, the magnetic snap either doesn’t work or is not possible.

I think there is something of a magnetic snap with through-hole devices but I’m pretty sure it isn’t there for SMD pads.

The shifting of grid origin is a pain and it is a lot easier to make a footprint from scratch rather than modify something in the kicad collection. On my stock version, there is a dark blue vertical and horizontal ‘crosshair’. This does not follow the grid origin and I think it is meant to.

Rene, thanks for your help and persistence with the program. You helped last time I had a query and I’ve been doing other things in between times.

Turn on magnetic pads in the preferences.
Then use the alt key to turn off grid snapping.

Turn on magnetic pads in the preferences.
Then use the alt key to turn off grid snapping.

This doesn’t help if there are graphics to which one wants to snap pads.

I have two tips, in case they help.

One is that it’s possible to set the “transparency” of all Layers and Items using the Colour Picker. Double click on the color patch next to a layer or element (example, Through Hole Pads) and adjust the transparency.

The other is, if you know the co-ordinate of the end point of the line where the Pad needs to snap, you can just enter these co-ords in the Pad properties. Not the most ideal, and not as fast as magnetic snapping, but it might help if that doesn’t help.

When I have a surface mount device I choose to make each pad a through-hole pad with a tiny drill hole. I can then see the end of the track at least.

It is still a problem to use nonetheless.

I’m working on Linux and my transparency doesn’t seem to change. 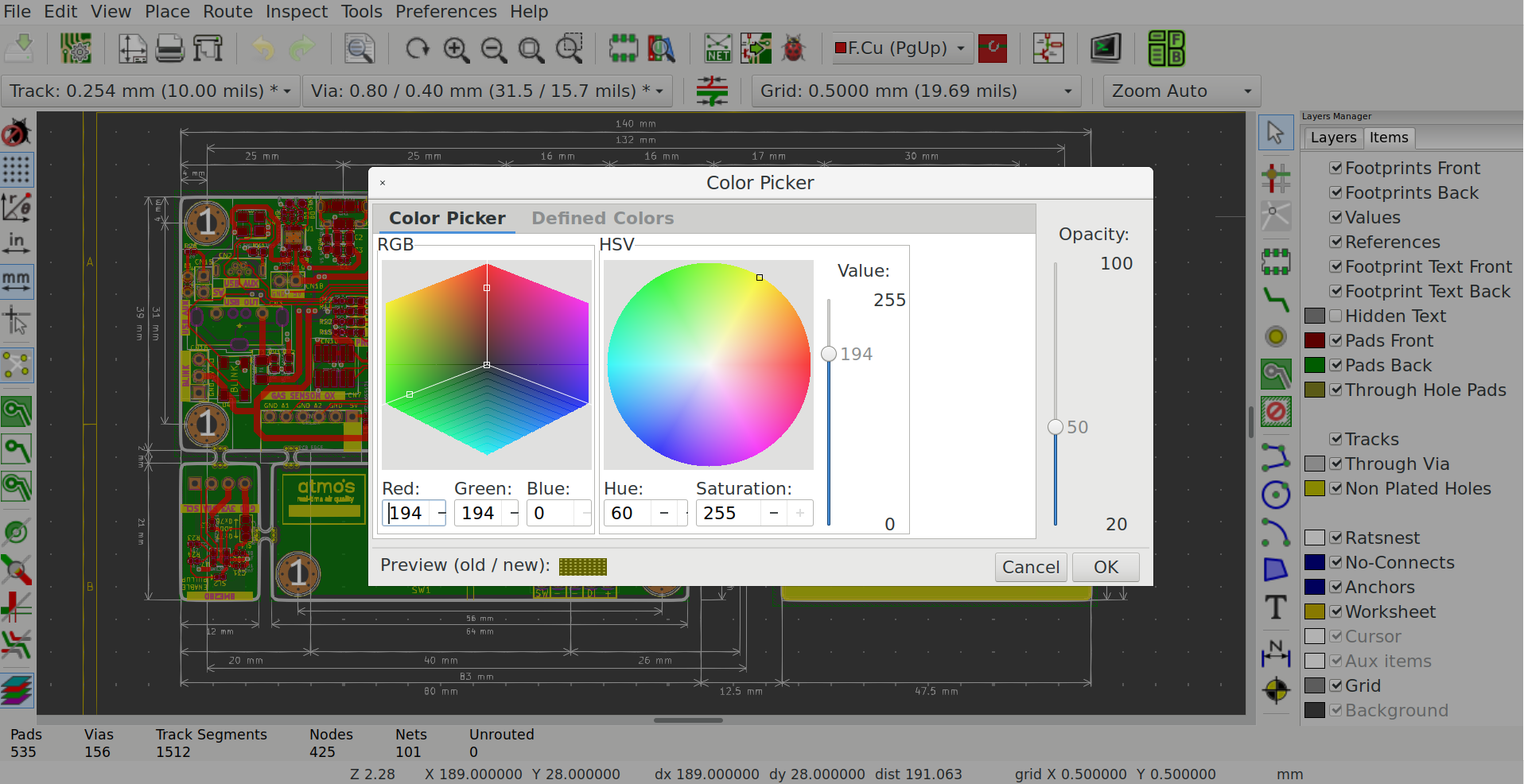 This only controls the copper ring not the “hole”

Thanks Anool but I’ve had no success yet.