Library for micro usb connector USB_MICRO _5S B symbol and library for kicad 5.1.2

You placed this into the footprint category so i assume you search for a footprint. Footprints are hightly dependent on the exact component you choose. So you will at least need to give use the part number or possibly even better a link to the datasheet.

i have selected this device from schematic desighned by node mcu team
USB micro female SMT with 4 fixed foot
As per the schematic please refer the screen shot attatched.
except vcc,gnd,D+,D- pins,Id all 4 pins 6,7,8,9 are shorted.
Can i use the foot print of micro usb with 5 pins since those pins are grounded.

USB_MICRO_5S_B will be part number i hope

I’ve seen several designs for USB micro connectors. It best if you get hold of a sample and measure it to choose the correct footprint or if none draw it. Then order enough for your boards as next time you may be supplied with a slightly different one.

USB_MICRO_5S_B will be part number i hope

I think not. Give a manufacturer part number or rather a link to the physical component (a manufacturer’s product page, datasheet, or maybe a distributor’s page, like https://www.digikey.com/product-detail/en/molex/0475890001/WM17143CT-ND/1832255

sorry i didnt understand can you explain more on it

There exist dozens of usb micro b connector models, you have to know exactly which one. The symbol is generic, the footprint must match exactly the land pattern of the physical component.

USB micro female SMT with 4 fixed foot
As per the schematic please refer the screen shot attatched.
except vcc,gnd,D+,D- pins,Id all 4 pins 6,7,8,9 are shorted.
Can i use the foot print of micro usb with 5 pins since those pins are grounded.

I don’t see a screenshot, and the information isn’t enough. The physical component may have the ground pins (or rather the mounting pins) in different places compared to some random footprint.

There is not a single design for USB micro female connectors. They all differ slightly in dimensions, the placement of the connectors and the mounting holes. As others have said you need to get the the part number and the datasheet for it. Then to be sure you have got the right footprint double check by measuring the dimensions of a sample.

For example here’s one that I bought, already mounted on a breakout board. Quite likely the one you buy will be different in shape. 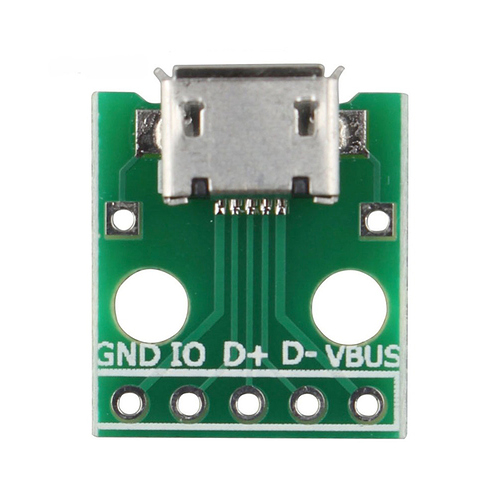 https://www.molex.com/molex/products/datasheet.jsp?part=active/0483930001_IO_CONNECTORS.xml
i think this suits but iam not sure can anyone please guide me on it

come on man, that’s not a micro or a type B connector.

this is the reference

That’s likely a good choice if price is more important than quality, the same or almost identical clones can be bought from Chinese net stores with cheap price. This may also be a clone of some well known more expensive manufacturer’s product (often cheap Chinese connectors are). The same or similar has worked well here. The footprint I made has slightly different dimensions/positions for pads but I think it would work. But it’s better for you to make your own based on the PCB LAYOUT of the datasheet.

I finally got around to examining some components I bought from LCSC. If you can find the part page at LCSC (and make sure it’s the part you bought or will buy), you can download ECAD data provided you sign up with SamacSys (for free). You can then get a zip file containing ECAD data for various EDA software, Kicad being one.

In the Kicad subdirectory you can find .dcm, .lib, and .kicad_mod files for the part which you can import into your own library with the Symbol Editor or the Footprint Editor.

I’ve found that they were a bit lazy with the symbol files. For example all the pins were of type unspecified, but this was easy to correct. Also the pins were not assigned sequentially going around the perimeter but in two rows. I know that pins on a symbol are usually arranged/grouped by function, not by position, but for these components (a LED display and a driver chip respectively) along the perimeter is as good as any and less confusing. This was also easy to correct in the editor. Probably this is because cheap hires who don’t understand chip functions can do the data entry for SamacSys.

Probably this is because cheap hires who don’t understand chip functions can do the data entry for SamacSys.

It looks like the symbol is automatically generated. Either way no intelligence was involved!

Intelligence is overrated. It’s a hindrance to getting elected these days.