KiCad destroys self made symbol library

I use KiCad 5.99. I set up a global library (*kicad_sym) and set up quite a few symbols in the past month. It all worked fine, but I noticed within, that the power symbols changed (Cant upload more than one pic).
Later I noticed, that nearly all of my symbols changed. The graphical lines are distorted, pin locations moved and so on. Here an example of a MOSFET in my library: 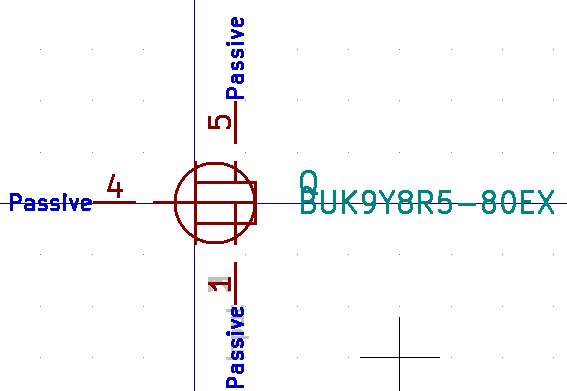 I am quite desperate, because I have no clue why my hole self made symbol library is corrupted.
Anybody a clue?
Thanks!

I should add: I places all pins on a 100mil grid. The graphical stuff I used different grids.

You should give the exact version information.

I vaguely remember that there was a temporary bug which caused items to go wrong. I don’t remember if there was any solution other than re-edit. If there was such a known bug it has been fixed already.

I don’t remember if there was any solution other than re-edit.

Of course there is another solution:
Restore your last backup.
You do have backups, don’t you?

I also remember the bug eelik reports. I think it was several months, maybe half a year ago. You should not use nightly versions that are that old. So post your full version info, it’s about 20 lines of text you can copy from KiCad / Help / About KiCad / Copy Version Info

I have a very simple yet effective backup strategy. Every day I’ve made a significant change to a project I put the whole project into a zip file and prepend it with a date in ISO_8601 format. This lists backups in order they are created so it’s easy to see what’s the latest backup and how old it is.

Thanks for answering. I didnt make backups upto now. But it seems I need to. Thats a good solution for the start.
Nevertheless it is quite anoying and I like to know why KiCad is distorting the symbols.

Your nightly build version is rather old. Commit 9f18fee124 is from 10 weeks ago. So i would guess that an update to the current nightly build might fix your issue (meaning there is a chance that the bug that resulted in library corruption is no longer present, I do not assume that your symbols will be repaired automatically). You might however still want to report this issue as library corruption would be a rather serious issue (search first if something like this is already reported and possibly closed)

Just in case you are unaware: 5.99 versions of kicad are the nightly builds not stable releases. These are development snapshots that are build every night and are therefore rather unstable. They are meant to give users a relatively easy way to help test future releases.

For more details see see Is it a good idea to use a nightly build version?

In case you were unaware that these are nightly builds and are now wondering what to do: Well your current projects can not be opened in the stable version. Meaning you will need to stay with nightlies at least for them. And as v6 comes closer it might even be preferential to completely stay with nightlies until it is finally released (as your libraries are now also in the new file format so going back is possibly quite a lot of work).

However, as there will be another version 5.1 release soon i doubt that v6 is really this near so who knows what the best long term option for you will be.

If you want to make a bug report and / or try to find out what the cause is, then your damaged library may have important clues, but indeed, as Seth_h added: bug reports for a KiCad-nightly that is 10100 - 8539 = 1561 behind is not a good idea.
From your screenshot it looks like some of the least significant bits or digits of the coordinates got truncated. This may well be the same bug that eelik & I remember.

And as Rene wrote. If you want to work in KiCad-nighty, then keep your version current. Newer versions get build (almost?) each night. For me it’s easy, updates for KiCad-nightly come with regular system updates. Apparently it’s a bit more complicated for Manjaro, or else you would not be running a KiCad-nightly from 2021-01-25.

I would avoid using the word “released” here. Nightly builds are not releases. They are just builds of the most recent commit at the time the build is triggered. This process is fully automated.

In contrast to that a release is much more involved. Typically, there is quite a bit of alignment within the team done before the release. The commit is specifically chosen (a git tag is made uniquely marking the commit to be used for all builds of the specified version number). With the time when it will be chosen known well in advance (to give all sub-teams time to be ready at the given release date).

If you want to make a bug report and / or try to find out what the cause is, then your damaged library may have important clues.

Please do update before making a bug report. Reports on nightly builds that are 3 months old are usually not helpful and they take time away from other tasks like getting v6 out. Please note that your build is 8593 commits into the 5.99 cycle. Current builds are 10100 commits in, so you are missing 1600+ bug fixes and improvements.

You might have encountered this bug, which was fixed

cacheLib() can cause a re-load event, which requires the C-locale. LOCALE_IO needs to be set before this event to prevent mistaken ','/'.' mixups Fixes https://gitlab.com/kicad/code/kicad/issues/6434

Thanks guys, you helped me understanding nightlys a bit. I will update my AUR short terms now.
As well I will save backups. This will handle it, I guess.
@MitjaN; The buck seems very much like my problem. The pins shiftet from 2.54mm to 2mm and so on.
Thanks for help (and the nice way to communicate it)