Does any one have any idea why the JLCPCB component placement viewer is not showing my components in the correct position. Kicad 3D viewer shows it fine. In pcbnew I’ve set the auxiliary axis origin to the bottom left hand corner of the board (I’ve tried other locations too). All components are on the top layer of a 2 layer board. When generating the Gerber files, I’ve selected the ‘Use auxiliary axis as origin’ option (I’ve also tried without). I need to manually adjust the rotation of some components in the .pos file, but that doesn’t seem to be the problem. Here’s what I get: 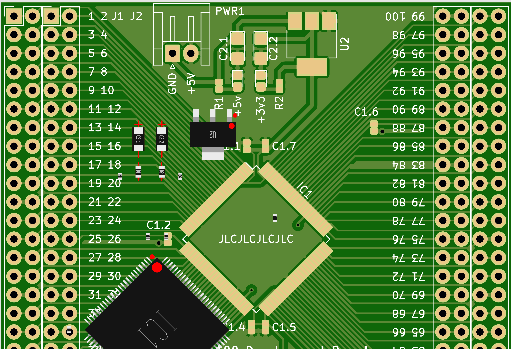 If I deselect some of the components in the JLC Parts Selector it seems to sort itself out. I’ve not been able to find a particular pattern of components that need to be removed: 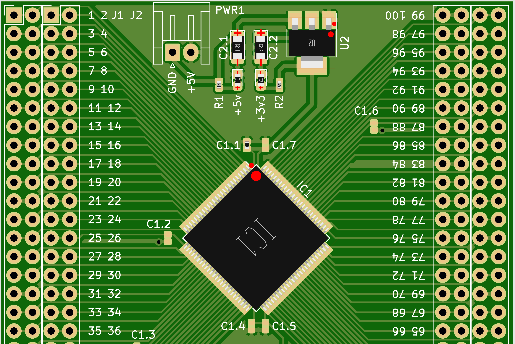 I’ve had similar (or maybe the same) issue with JLCPCB too. It happen twice for different reasons:

Thanks for the suggestions. Just checked my gerbers, and I’ve definitely got the soldermasks layers in there. Also, I can’t see anything particularly strange with the CPL or BOM files. I’m following the guidance that JLC provides.

When it’s happened previously, JLC have corrected it for me automatically at the DFM analysis stage, but I’d still prefer if it was displayed correctly before I place the order.

I totally agree, I also prefer to have the preview displayed correctly.
However that does not mean that JLCPCB will not assemble it incorrectly… I do not understand their DFM at all. Sometimes it says that there are missing pads and that the component will not be soldered (the footprint is from KiCad library and the component gets soldered every time) and sometimes they fix the rotations without saying and sometimes they don’t and sometimes they rotate it wrongly even with detailed instructions…
I’ve described it somewhere else in this forum but I am using RGB LED, that has notch on pin 3 and it is a pretty good gamble every time…

I’ve selected the ‘Use auxiliary axis as origin’ option (I’ve also tried without).

I have never used JLCPCB.
From 1988 to 2018 I have never seen 3D view of my PCBs.
In KiCad I see gerbers and drill files can use absolute or auxiliary as origin, but I don’t see such settings for Footprint positions file. I just supposed that this file (by definition) has only relative element positions and the manufacturer adds the needed offset. As typically PCBs for production are formed in panels he have to specify offset at least for n-1 PCBs. I see no problem if he have to specify it for all n PCBs.

In KiCad I see gerbers and drill files can use absolute or auxiliary as origin, but I don’t see such settings for Footprint positions file.

The position files are always related to the auxiliary axis origin. Not vey clear in the current documentation, it was clearer in older manuals.

LOL. TBH, so far I’ve found their DFM process to be quite reliable. I’ve even been quite surprised that they can tell which way round some components need to be given that they don’t have copies of the original circuit diagrams or pcb layouts.

I’ve described it somewhere else in this forum but I am using RGB LED, that has notch on pin 3 and it is a pretty good gamble every time…

Are you able to get this fixed before it goes to manufacture? I’ve never had to challenge the layout, so I’m not sure how easy it is would be to intervene when the layout is wrong.

The position files are always related to the auxiliary axis origin. Not very clear in the current documentation, it was clearer in older manuals.

Yes, I found that when doing a search online. Regardless, it doesn’t seem to matter where I set the auxiliary axis origin, I still get the issue.

So far I did order only prototypes from JLCPCB. So I was able to rotate the LEDs manually…
Short story long:
The LED in question is WS2812B-Mini. It for some reason has notch on pin 3. I have the pins 1 and 3 and the notch marked on the silk screen:

I did write email beforehand to ask, how should I rotate the LEDs. Then I did order a simple board with only 16 LEDs to test. No DFM warning and the LEDs were OK.
Then I did order the real prototype and they sent me an email asking about the rotation. We exchanged like 5 emails and I did even send them screenshot from KiCad. However their English is not so good so… And I had to rotate all of them…
Next time I order something with these LEDs everything worked fine…

What was the zero orientation of that footprint? 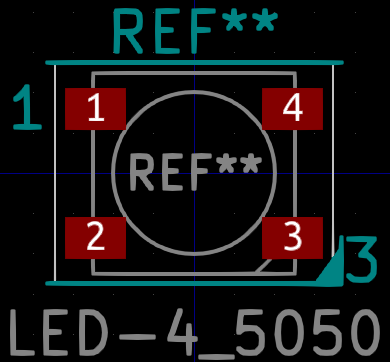 Thanks. Asking because a similar issue came up today.

I was wondering if the reasoning there makes sense. There’s no standard covering this case as far as I’m aware.

Well, I am an entry-level PCB designer so I have no idea if there is any standard covering this. And I think that the only way to be safe is to have a more absolute way to specify the pins… However we did use the same LEDs in our another project. The person responsible for PCB design there is much more skilled and he did his own footprint from scratch and guess what

And just to be fair, I did order some prototypes from PCBWAY and they did place them incorrectly too. However they did not have the fabrication drawing due to some miscommunication and they did send photos of one assembled PCB so we did catch the problem soon and they managed to rotate the LEDs…

The original problem (in the JLCPCB viewer) was answered satisfactorily, so I guess it’s OK to continue with this offtopic…

We exchanged like 5 emails and I did even send them screenshot from KiCad. However their English is not so good so… And I had to rotate all of them…

I recommend adding pin explanations to the fab layer and sending the fab layer to the assembly factory in case they happen to read it. I don’t mean sentences, but Anode/Cathode etc. In this case

It’s possible that they still get it wrong but it would be one more piece of information which would be unambiguous without long English explanation. You could even draw how it should look like from above (from “Mechanical dimensions” in the datasheet).

The original problem (in the JLCPCB viewer) was answered satisfactorily

Well, I’m not sure it has. I still don’t know how to get JLCPCB viewer to reliably locate the components on the footprints. It’s still very hit or miss. However, I don’t mind the thread going off topic a bit. It’s still related.

I thought the answer is that their viewer is broken, isn’t it? It doesn’t satisfy but we can’t help with it.

I think that at JLCPCB they completely ignore the fabrication layer but I do not want to underestimate them though.
I did even send specific screenshot with pin numbers but the email communication was like:
Me: here is the screenshot with all pin numbers
Them: here is screenshot, pin 3 marked with red arrow (and they sent a screenshot with bunch of Chinese from some assembly software and red arrow pointing to notch)
Me: yes, the red arrow goes top right
Them: the arrow is pin 3, right
Me: yes,…

And the problem is that due to time difference I was able to exchange only 1-2 emails per day… But I do not complain because of the price. And also their knowledge of English is way better than my knowledge of Chinese (which is 0).

At PCBWAY I did pay twice the price even with a special bonus. On the other side they did manage to source all the parts (including connectors and buttons) and assemble on both sides. And they also did send photos and managed to fix the problem.

So to return on topic (even though slightly): I do not care much about JLCPCB viewer as I think that their service is cheap with all the negatives (not assembling connectors, buttons, only one sided, unable to source parts,…) and positives. So it is sufficient for a prototype…