Insert an existing footprint into my footprint

I’m still pretty new to KiCad and PCB design in particular. I’m trying to convert a few little circuits I made for a few sensors some time ago into nice PCBs, just to learn KiCad / PCB design.
I’ve already created a few simple footprints for things which I couldn’t find in the library. But for the one I’m making right now, I struggle a bit.

My footprint is pretty simple: It consists of one 5-pin and one 4-pin header row and it should also have a mounting hole, as this footprint should hold a little M5Stack Atom. And this Atom has a 2mm screw hole. So I think having the mounting hole being part of the footprint makes sense.

As there’s already plenty of footprints for mounting holes, I just want to reuse one of these. But I really can’t find a way to import or load or merge an existing footprint into mine. The only two promising things won’t import it into mine, but create a new one…

So the only thing left I thought is good old copy/paste. So I opened the footprint I wanted (“MountingHole_2.2mm_M2_Pad_Via”), copied it and pasted it into my footprint. I reassigned the pad numbers for the mounting hole and thought: “Cool, that’s it!”.

But no, it wasn’t… When I added that footprint to my PCB and ran the design rules check, it’s throwing this: 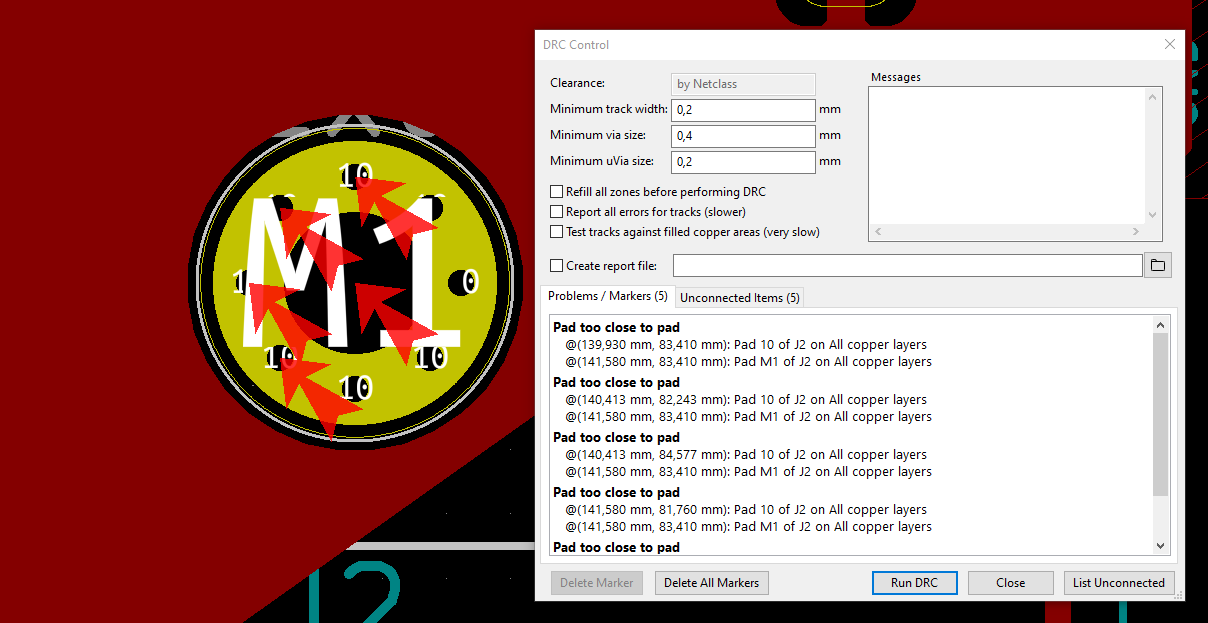 I just can’t see what’s wrong with it, so what is different to the mounting hole footprint I pasted into my footprint, compared to the original one…

Or is there a real way to import an existing footprint into my own, besides c/p.

Thanks so much and greetings,

If I see it right, it’s because the pads have different names. If the big pad is called M1, the small ones must also be called M1 if they shoud share the same copper. So the DRC thinks there is a short between M1 and 10.

Ooohh my goooooood. That was it! The solution is sometimes soooo close infront of you…

Thanks so much, that solved it!!