Importing my Altium libraries into KiCad

I would like to switch over to KiCad, but first need to know the following:
Is it possible to import my Altium schematic and Altium PCB libraries into KiCad?
If it is not possible, it is hardly worthwhile for me to switch to KiCad since I have extensive Altium libraries which has taken much effort to create all the symbols and footprints to suit me.
I will appreciate someone’s reply on this.
Thank you.

There is some work being done on an Altium to KiCad converter, but it’s not ready yet, and therefore hidden from regular users. I have not used it myself, so I can’t tell you more about it.

There is this https://github.com/thesourcerer8/altium2kicad GitHUB project about, but I never used (just converted manually).

I accidentally bumped into: 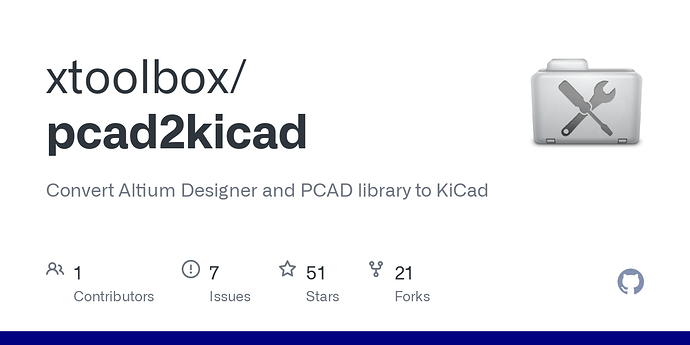 Convert Altium Designer and PCAD library to KiCad. Contribute to xtoolbox/pcad2kicad development by creating an account on GitHub. 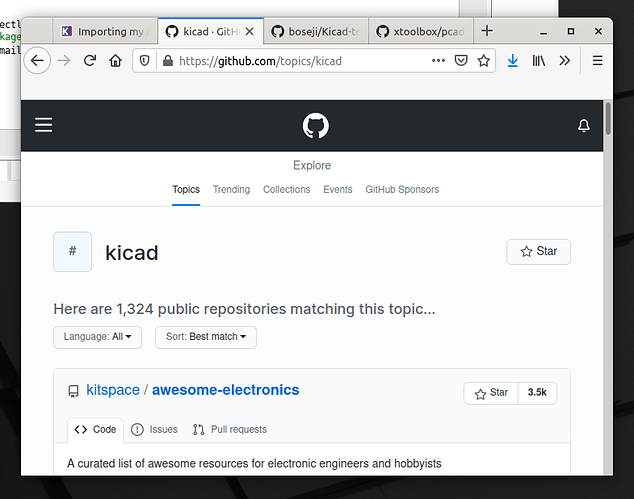 And there may be other gems hidden among those 1324 public repositories.

Just for fun a comparison with altium: 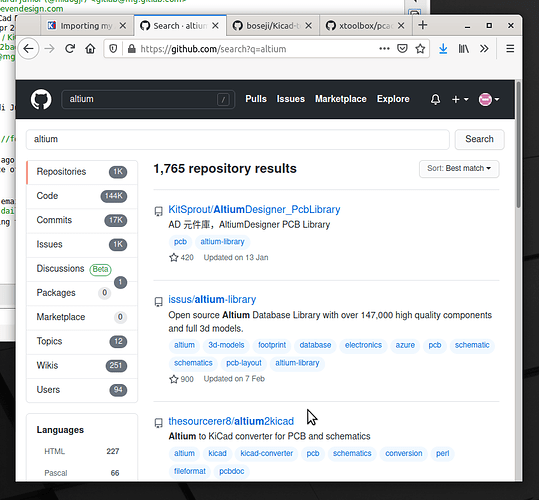 1765 is more then KiCads 1324, but it does show KiCad is getting quite popular. The third from the top is “thesourcerer8/altium3kicad”

I also tried “eagle”, it got 10.000+ repositories which range from some kind of bird to a programming language, and I have no interest in sorting those out.

Doing the similar on gitlab also gives an intersting result. 72 for altium, while KiCad gets “99+” number of projects. I counted 57 pages with each 20 repositories, so that’s over 1000! This result is very skewed though. KiCad development takes place publicly on gitlab and there are lots of forks of KiCad or KiCad parts, such as libraries, website and other related content.

Searching gitlab for both altium & KiCad finds a project which was converted with altium2kicad:

Hello Paul,
Thank you for your reply.
Best regards,
Stephan.

KiCad nightlies support import of Altium schematics and boards. With some refactoring, adding support for Altium libraries should be easily doable as most code is already there.

Good day Thomas,
Thank you very much for your reply.
Regards,
Stephan Oberholzer.

You can create an Altium schematic and board containing all the parts in your library. Then you can import the board and schematic into KiCAD.

There are plans to let KiCAD import an altium project (board and schematic) in one go, but I don’t know if that’s finished.

Hello Cedric,
What you are saying is wonderful.
Thank you.
Regards,
Stephan.

However, when you open a schematic or a board file, you can import non-KiCad files (non-KiCad schematic and non-KiCad board files) from the main menu.

It is always better to stick to Altium as it is more detailed and provides more options than KiCad.

It is always better to stick to Altium as it is more detailed and provides more options than KiCad.

While I do agree with you, Altium has a few fundamental downsides:
-It’s closed source and only runs on Windows.
-It costs a lot of money.
-There’s no documentation on the file format. Therefore you are locked into using Altium. (The current file format has largely been reverse engineered, but there’s nothing stopping Altium to completely change their file format. )

If you don’t want to spend much time converting your own altium libraries to KiCad (it’s pretty boring work), then maybe you can use the cost of a single year of Altium use as a budget to hire someone to do the conversion for you.

And this just got me to an idea:
Something like the above would need some way of communicating your existing library to someone else, and one of the ways to do that is by printing all library symbols to a .pdf file.
Many datasheets are distributed in .pdf format and there are tools to help in KiCad with extracting data for schematic symbols from .pdf files.

A quick search:
https://html.duckduckgo.com/html?q=kicad+pdf+datasheet+import
brings up several possibilities. “Uconfig” seens to be specifically written for KiCad.

Another one uses “Tabula” with a bit of custom python to aid in the conversion:
https://blog.atx.name/kicad-import-pdf-pinouts/

Converting your libraries is also a one-time thing. How does that compare with the recurring costs of Altium?

I think it makes more sense to make a review of KiCad and make a list of pro’s and cons and then decide if it is suitable for what you want to do with it.