I have been looking to see if I could find a symbol for ignition coil. Something distinguishing from a transformer. Have spent a couple of hours in the hope I would not need to do one myself. Well looking was not on my side. [ should mention I understand the concept of using KiCAD but I am far from using it in practice, there seem to bee a big difference]

Is there anyone that has seen such an item.

I thought I was SnapEDA member but seems I am not so I do not know it one could be found there.

It’s astounding time and again to see the contortions people put themselves through in attempts to avoid making a schematic symbol themselves.

One of the reasons for me for choosing to use KiCad in the first place was because the editors for schematic symbols and PCB footprints are quite good and have a very similar look and feel to the rest of KiCad, which reduced the learning curve.

Really, you should try them yourself sometime.

Hi @icebird
This was six minutes work which included finding a suitable Tx to modify.

Really, you should try them yourself sometime. 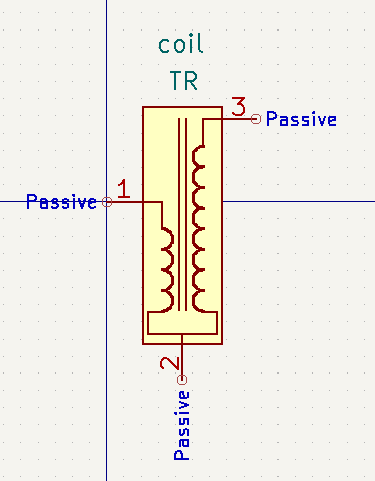 Gotta agree.
Instead of surfing the library/web etc. for hours, why not just take the “L_Iron_Coupled” symbol from “Device” and modify it? It would take 5 min. maximum.

EDIT: OK, @jmk beat me to it. But the 6 min. included searching.

But the 6 min. included searching

Yeah, because I went to TXs. first before remembering Device.
I think pins 2 & 3 are off grid… shame on me!

Can you make me an ignition’er for the coming summer days?

ignition’er is easy. Just wondering if “coming summer days” will ever arrive?

Have spent a couple of hours in the hope I would not need to do one myself.

Before I started to design my first KiCad PCB I have spend a couple of hours to define symbols and footprints of all elements I know I will use. It was more than 50 symbols at the beginning.

Remember that in the last resort you can always represent a synbol as a box with pins, eschewing elegance. Fortunately I can do this for many of the ICs I experiment with since the engineer reading the schematic (me) isn’t very demanding.

The most difficult part of creating and using self created symbols is the library management, and even that is not very difficult. (At least, when you know how it works). In Kicad the editors for the schematic symbols and the footprints double up as the library management tool for those parts.
To create a new schematic symbol library, follow these steps:

Even if you want to use schematic symbols from some other source, you have to do the library management, so getting parts from elsewhere won’t save you any time in that part.

When you want to create your own schematic symbol, you can just draw a box with pins as retiredfeline suggests, but it’s often better to start with an existing symbol. This is both an example, and when the start is rightly chosen also reduces the amount of work for you.

The schematic symbol you want is probably somewhat like a transformer, so the first step is to open a transformer symbol in the symbol editor by scrolling to it, and then double click on the name. If you’ve found a suitable start, then right click on the name and select Copy Ctrl + C from the popup menu. 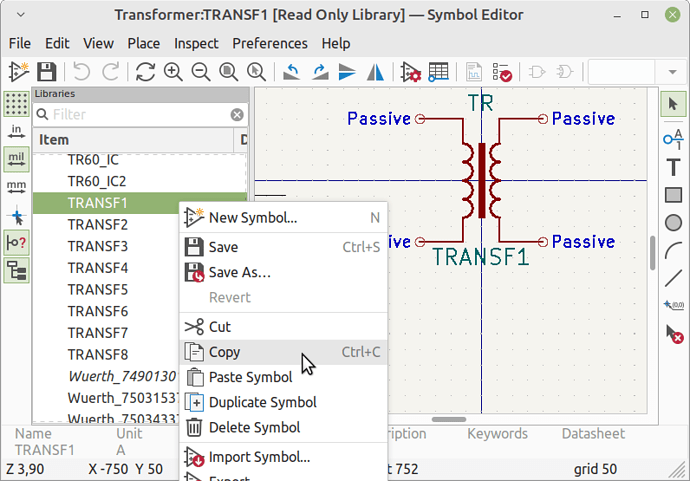 Then find your own library which you just created and paste the symbol there.
You can change the name of your newly copied symbol with: File / Symbol Properties / Symbol Name.

After these steps you can add pins, add copy or delete graphics and other properties. This all works pretty much the same as in the schematic editor. When you’re finished, save your symbol end exit the symbol editor. You now have a self built schematic symbol, and you can load it from the schematic editor just like any other schematic symbol. To create this mini tutorial I followed these steps myself. Both to jog my own memory, and to verify the steps. I now have: 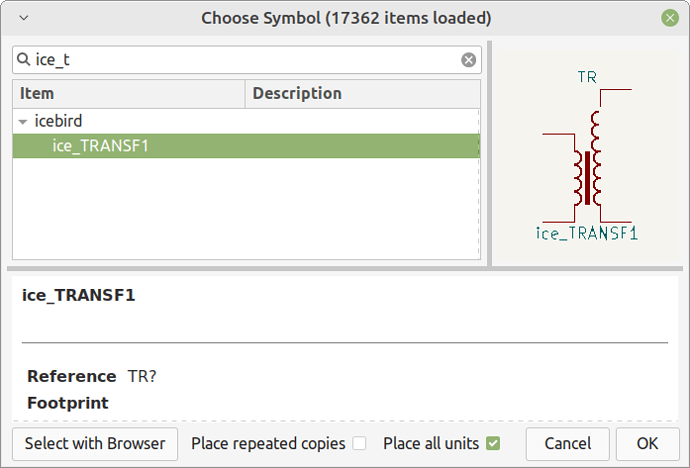 There are also quite extensive articles about various topics in the FAQ area of this website. Among them is a much more in depth tutorial for creating schematic symbols, but some things may be a bit different from this older tutorial.

Disclaimer: Screenshots taken in a nightly from after the 5.0.x releases. The current nightlies are expected to become 5.1. Some features shown here are missing in the current stable 5.0.x. Some dialogs look different in 5.0.x. KiCad version 4 had a very different symbol editor meaning this tutorial is not really suitable to teach symbol creation in KiCad version 4 Quick start tutorial for the symbol library editor. Official documentation for the symbol editor Other FAQ articles worth read…

then right click on the name and select Copy Ctrl + C from the popup menu.

From that menu I use only “Save As…” function to do in one step what you suggest to do in 3 steps (copy, paste, rename). 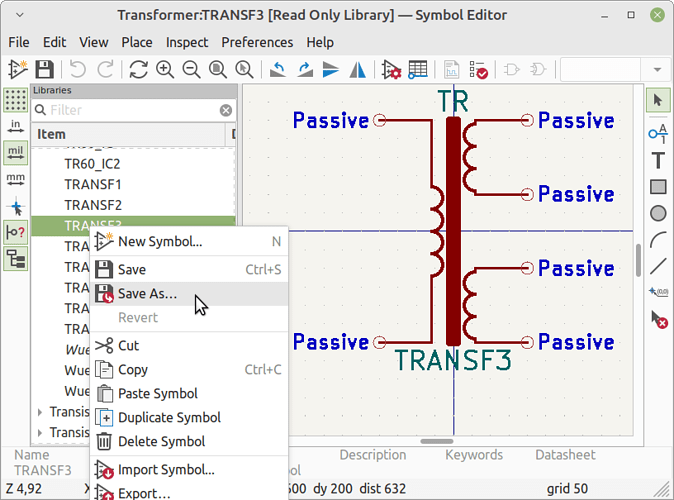 brings you to a sub window to select a new name and library to put the copy into: 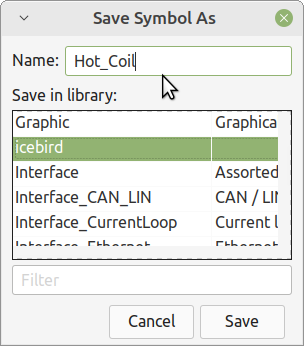 The most difficult part of creating and using self created symbols is the library management, and even that is not very difficult. (At least, when you know how it works)

Thank you all, I have to be up in 5 hours for medical lecture.
Electronics and Printed Circuits is my passion, perhaps was, as I have given it away to study medicine because of the COVID which has been made harder as I now have early dementia, which I blame on COVID.

I will come back later, the above quote was what I was trying to avoid, I knew I would fail to get the library management right. Had same trouble in ver 5.

Sure enough, the symbol was only about 10 min work because the grid played havoc with me. I had a suitable symbol, saved it in what should be outside the basic installation.

I have lost it and will have to see if I can find it tomorrow.

It’s astounding time and again to see the contortions people put themselves through in attempts to avoid making a schematic symbol themselves.

Once we know how deep the rabbit hole is we avoid it the second time round.

Quite often you have got to go though the rabbit hole to get somewhere. Making notes can help, but it’s quite difficult t make notes in such a way that they’re actually useful when you need them.

Small update. First my comment about the rabbit hole, my experience now is that while the hole is recognised, the content travelling through the same route repeatedly only looks partly familiar. I know what it is about but the vital details seems obscured in my memory.

Back to the present. I have lost my initial symbol, tried to find it because I seemed that I had done the right steps, which I recognised from the descriptions above. The New Library was there way down in the list, my first quick scan I simply did not see it, if I did it was also empty.
I have built new symbol and have better understanding from following above. I now find I have a real pass mess with the location.

Next step some work on understanding the ‘external’ personal storage.

A trick for every lazy KiCad user, Digikey, Mouser and such have often library symbols for many of their parts. Importing them is not always too easy, but at least you don’t have make the symbol yourself. Too bad Digikey doesn’t sell auto parts.
And Mouser Digikey are also good places to buy quality parts. Cheapest component in Ebay is not always best component there is.

Importing them is not always too easy, but at least you don’t have make the symbol yourself.

Can you explain that: “but at least …” part?
You still have to do the library management part, and that is 70% or so of the work involved. After having saved a standard transformer symbol into an “ignition coil” symbol and library, changing the graphics is just a bit of copy paste to get more loops and moving the pins a bit.