How to create a layout template

Hi,
I would like to create the layout for a power supply, that I could use on many board.

I’ve got a project with just my DC/DC power supply. Currently I do a copy paste to add is to another project.
But I would like to also be able to do a layout in my power supply project and “import it” in my new project.
Is there a way to do that ?

why dont you create the layout directly in KiCAD? I think it is possible and easy. You can also do it in fussion 360 and import to kicad.

save_restore_layout
Only kido5.1.x is supported, and the author is currently fixing support for kicad6

No it seems I wasn’t clear.
Of course I’ll do the layout (the actual track drawing and component placing) in Kicad (latest version).

But I want to copy it from my master project to another one.
I’ve got 20 boards that use the same DC/DC converter, And I want to do the layout only once and not 20 times.

I’m not talking of the board edge.

Yes that is what I’m looking for. I guess I’ll have to wait until it is ported to kicad 6.

It’s quite easy to make a template of a project.
The workflow is mostly to copy an existing project to a special directory, and add a description as an html file and an icon to click on. You can use any of KiCad default templates as an example.

But it only gets you the start of a project, and it’s not what you really want.
What you want is sometimes called a “design block” and that is not yet supported by KiCad. My best guess is that it will probably take a few years before they get implemented, but you never know. If some developer has a special interest in this topic it may get implemented a lot sooner.

Original report created by Thomas Pointhuber (pointhi) It would be nice to have the...

Until that happens, there is a partial workaround.
You can first assign a unique range of Reference designators to the parts you want to use in your design block, and then open two instances of the schematic editor (and of the PCB Editor) and then copy & paste the part you’re interested in from one KiCad instance to the other. Use Paste Special from the popup menu. Make sure to select Keep existing reference designators, even if they are duplicated during the paste operation.

After that you also have to re-sync the schematic symbols with the PCB footprints. To do that select: Re-link footprints to sxhematic symbols bsed on their reference designators during the Update PCB from Schematic [F8] operation. 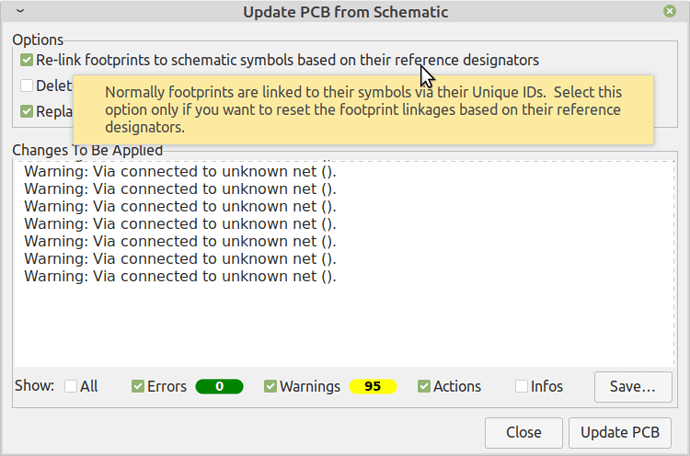 Yeah, it is taking more time, than I’ve anticipated. I’ve just found another bug in KiCad that is currently preventing me to proceed. So we’ll have to wait that it is fixed or I might find a workaround.

Example:
• I have a simple Alarm Project.
I window-box select the full circuit without the edge_cuts
I Copy it

• In the desired/target project, I simply Paste the copied Circuit.

That’s how you currently do it and it’s too simple to fuss with a template for it… Meaning, opening an Import menu item and going through the steps is not any quicker (for me…). But, I’ve done it by making a Footprint of the Circuit then, inserting the footprint into another project… 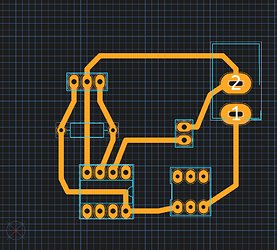 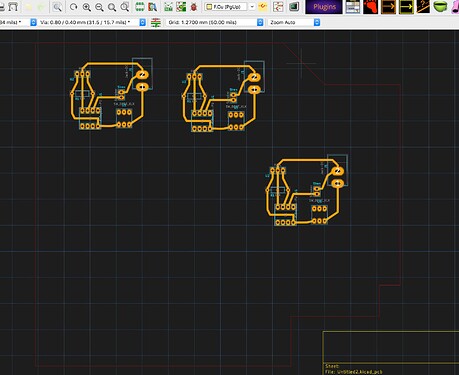 I simply Paste the copied Circuit.

It looks for me that the answers are not directly to the question. I have also tried (some time ago) and I don’t know the way to copy a layout to the second project.
My solution (5.1.12) is to manually arrange footprints the same way and then copy all tracks (they get new nets correctly), but it is not a copy as it is asked.
The situation I consider:
We have one project with everything ok.
To the second project we:

The question is - how to make PCB of second project (mainly element references) to agree with that project schematic.
At least I think it is the question asked.

… and I don’t know the way to copy a layout to the second project.

Just make a selction of some footprints and tracks, copy it to the clipboard, and paste it in another KiCad instance. For my previous post I tested this to copy from a “standalone” version of the PCB editor, into a project and it just worked as expected.

My solution (5.1.12) is to manually arrange footprints the same way and then copy all tracks (they get new nets correctly), but it is not a copy as it is asked.

I would turn this around.
If you have a discrepancy between footprints, (for example when the link between schematic and PCB is lost) then you can first copy or move the PCB tracks, delete all the footprints, and use the endpoints of the remaining tracks to snap newly imported footprints to. This insures their correct relative position.

I’ve done this a bunch of time whilre reverse-eingineering a KiCad project from Gerber files. See:

2022-01-17 The goal of this reverse-engineering tutorial is to re-create a complete KiCad project from partial information assuming the only information available is a schematic in some readable, (but not EDA form, such as a .pdf or a .png picture), and a set of gerber files. The Gerber files will create a PCB with much PCB information missing, however, using this method is easier than re-designing a PCB from scratch, and can also be extended to any other program that creates Gerber files. …

and use the endpoints of the remaining tracks to snap newly imported footprints to.

If you have “bare tracks” and place a footprint on it, then those tracks also get assigned to the net of the pins of that footprint. This is a tremendous help in the “reverse engineering” from the Gerber files I did (and described in that FAQ article). It’s also very easy to try out yourself.
This snapping however is (I think) turned off by default. You can set it with Pcb Editor / Preferences / Preferences / Pcb Editor / Editing Options / Magnetic Points / Snap to tracks: Always

It is indeed more work then just a straight copy of both tracks and parts, but it also has more flexibility, and it is a way to “fix” things if they have become broken.

So, the plugin was released and is available in KiCad’s Plugin and Content Manger (PCM). It works more or less as the 5.1.x version did, But it’ll be a while until I write the documentation. If anybody volunteers to write it I’ll really appreciate it.