How can I stop kicad implicitly connecting nets connected to pins with the same name (e.g. VCC) 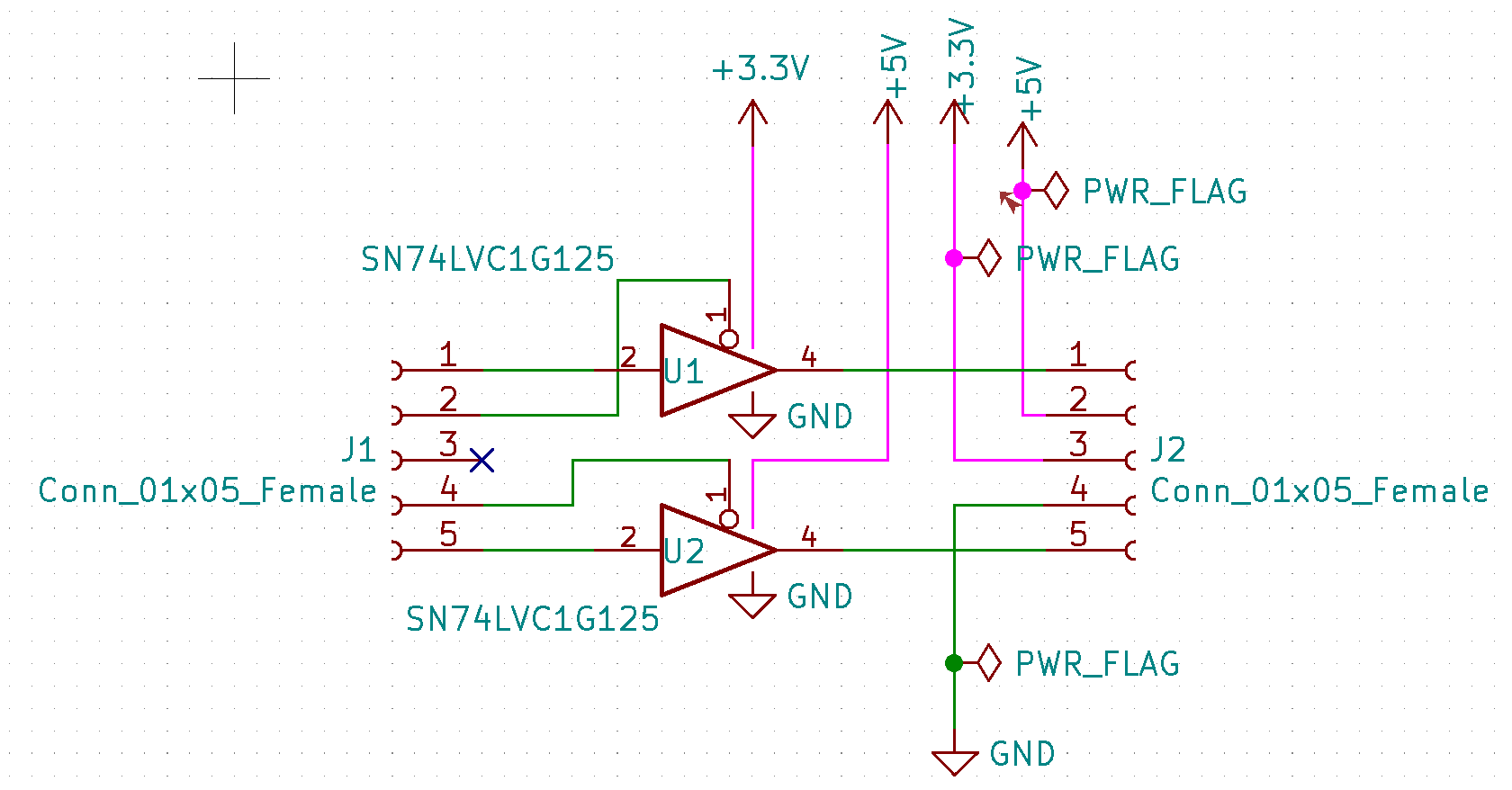 Picture shows what I mean. If I have two components with a VCC pin, but I connect one to 3.3V and one to 5V, Kicad tries to connect both nets, I think. What is the proper way to stop this?

Kicad tries to connect both nets,

I don’t have V6. I have never seen wires in different colors but I assume that may be it is because of V6 and that are not graphic lines but wires and symbols don’t have hidden power pins.

If yes than it is probably the same story as here:

@Piotr He’s using the “net highlight” function to highlight the “VCC” net. This function is already present in KiCad V5, so nothing special here.

The closest I could find in KiCad’s default libraries is the 74LVC1G125 (Without the “SN” prefix).

If I tear that symbol apart in the symbol editor, the parts look like: 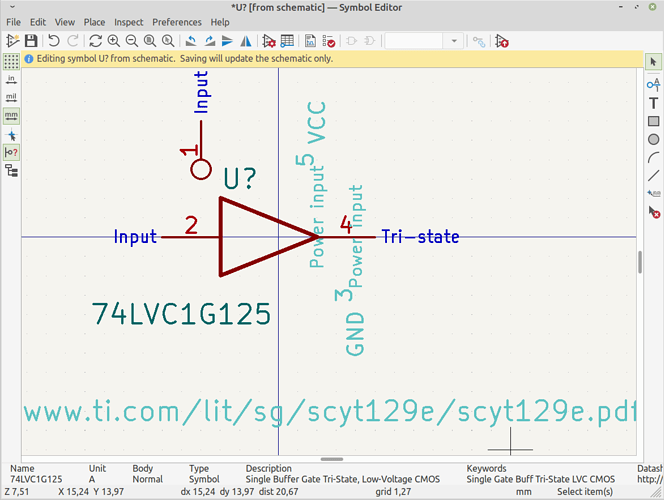 You have managed to connect to “invisible” pins.
I think that pins that are both invisible, and set as Power Input type are automatically connected to a net with their pin name, and when you also connect an extra wire to it,

Making the pins visible in the schematic symbol editor (sort of) fixes it. 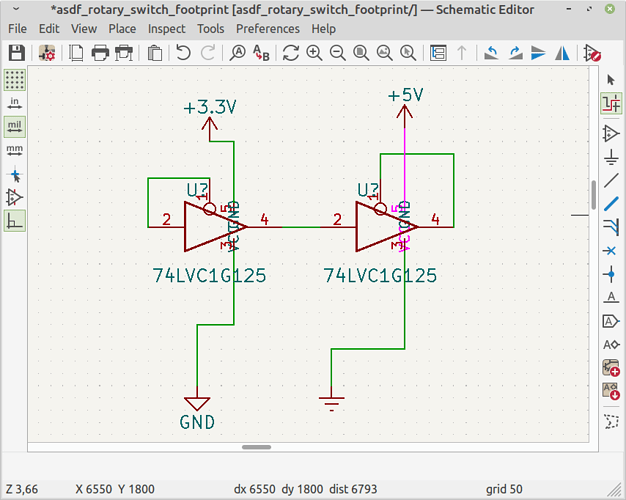 You probably copied the +5V power symbol and changed the label to +3.3V. That doesn’t work, they are still connected to the same net; see the story Piotr pointed you to. The symptom is visible, the +3.3V symbol from the library actually is an alias for +3V3 and this is what would display if you had taken a new +3.3V symbol from the library. (Ok, so the alias does show, but I still think you copied the +5V symbol to make a +3.3V symbol by editing the text.)

This is not correct:

The symptom is visible, the +3.3V symbol from the library actually is an alias for +3V3 and this is what would display if …

I verified that I can both place a +3V3 and a +3.3V symbol directly from the default library, and show them both on screen. KiCad does treat them as the same net though: 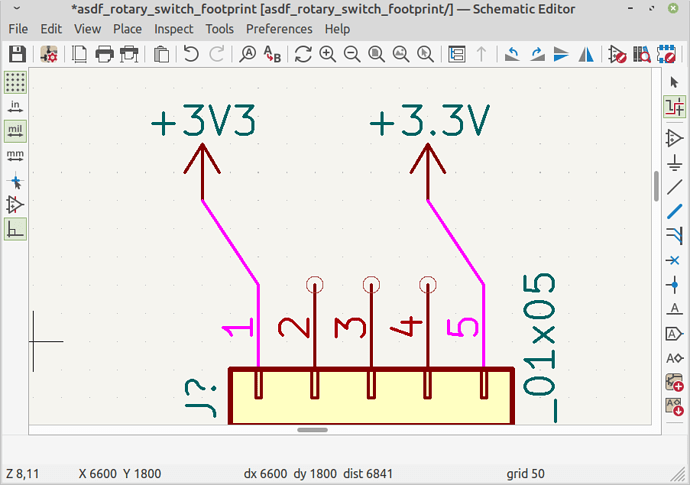 The other experiment I did earlier confirms that the issue was caused by the hidden power pins.

Note:
I’m a bit confused about KiCad V6. Can’t find everything yet.
I can’t seem to find the list of aliases for a symbol at the moment.

A bit later…
That’s weird:
When I put a “+3V3” symbol on the schematic, then [Ctrl + E] to load it in the symbol editor, and **Symbol Editor / File / Symbol Properties, then Derive from symbol is empty. 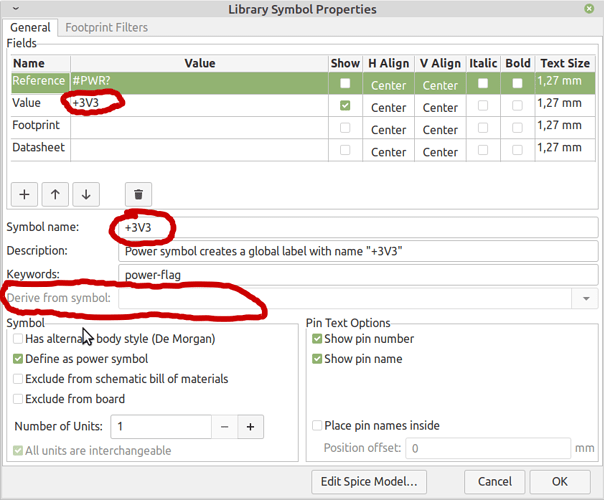 When I do the same with the +3.3V symbol it also appears to be a separate symbol: 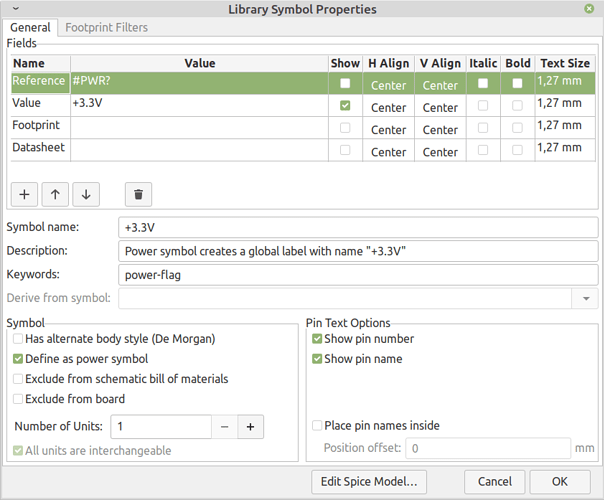 So why does KiCad think they are in the same net? (according to the purple highlight).

Edit:
I think I understand now.
I loaded the symbols from the schematic into the symbol editor with [Ctrl + e].
When I first go to the Symbol Editor and then load the symbols, then it tells me that:

This appears to be another one of those why is this. Bottom line a power symbol with different name should be different nets.

“… When I tell you, a cat must have THREE DIFFERENT NAMES. …”

Thanks for the answers everybody. I thought there would be a proper solution to this without needing to create a new part. I don’t think hiddens pins should automatically connect to a net if they’re already connected.

It’s a side effect from the way power symbols are defined in KiCad and it is a thing that can’t really be changed because lots of old projects depend on this behavior.

On top of that, schematic symbols with hidden power pins are sort of obsolete.
They did make sense 30 years ago when a PCB could have hundredths of TTL IC’s all connected to the same power supply.
In this more modern world there can be multiple power supplies with different voltages connected to a single chip (for example FPGA’s).

So the proper solution is indeed to make a new schematic symbol, with the power pins visible.
A lot of users seem to be apprehensive against making new (or modifying existing) schematic symbols (or footprints), while there is no reason for that. KiCad has quite good editors for both and they have a very similar interface as the other KiCad programs, which makes them easy to use. The quality of these editors was one of the main reasons to choose KiCad. There will always be parts that are not in the libraries, and although you can find many online these days, the quality is often lower then KiCad’s own libraries, which results in that you often have to edit them anyway.

The first few times you make a schematic symbol or a footprint, it may take you an hour for each, but with a bit of experience this often becomes a 5 to ten minute task. And you also learn better how KiCad uses those schematic symbols and footprints and what attributes they have so you can make better schematics and PCB’s in the long run.