Hello, does anyone have Symbol and Footprint for the HL-52S relay? It is an integrated system made of a G5Q-1 like relay and an optoisolator PC817C.

For the relay itself, we could use the G5Q-1 or alternatives such as https://www.snapeda.com/parts/SRD-05VDC-SL-C/Songle%20Relay/view-part/1029484/?ref=search&t=songle

That appears to be one of such modules: 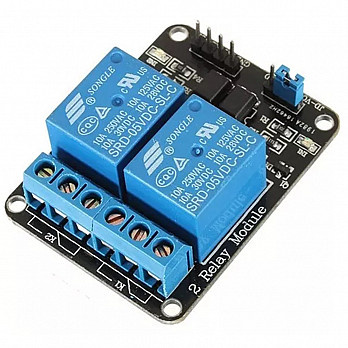 I have a strong dislike for these, it’s typical for Chinese Manurefacturing, (contradictory to Chines Manufacturing).

Firstly the optocouplers have hardly any clearance on the PCB, no decent isolation gap at all, so the most they can do is a bit of EMI filtering, but don’t rely on them for a mains voltage isolation rating. And at worst they give you a false sense of safety. But there are differences between different manurefacturers of these things. They are not all the same.

Then the relay’s themself. The common contact being in between the coil connections is already bad enough, but I opened one up and saw the internal clearance between the switch and the coil is just a few millimeters. there is some “10A 250Vac” text on the relays, but I would not consider these save for mains voltage switching.

Those songle things are sort of usable for low voltage medium current applications, but that’s about where their limits are.

Omron G2R (or clones) are much better in this regard. 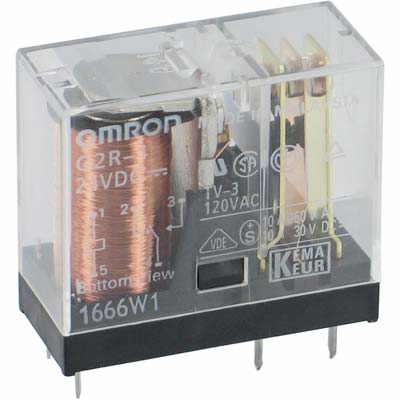 First they have a decent separation between the coil and the switches, and on top of that, the actuator between the coil and the switch does double duty as a labyrinth to reduce the chance of dangerousity in the case of extreme overloads or accidents.
And they have a transparent casing (or at least some of them), so you can view the contacts and judge the wear on them. Those mechanical contacts do wear with use, especially with high currents and inductive loads. But it’s quite a decent relay for a small price.
There still may be (I have not checked) nearly invisible but none-the-less important differences between “real” omron relays and the stuff you see on Ali. For example the material of the contacts themselves has a significant effect on how they behave under loads.

But enough rants.
I’m not sure what you are asking for.
Do you want a schematic symbol / footprint for the separate relay, or for the whole module?
Typical way is to use a connector on the PCB and then add wires to such a module placed elsewhere.

Normally such modules are not incorporated onto PCB’s anyway. Just put the relay itself directly on the PCB, and add the parts to drive it also to the PCB.
And look at that, there already is a G2R in KiCad’s default libraries: 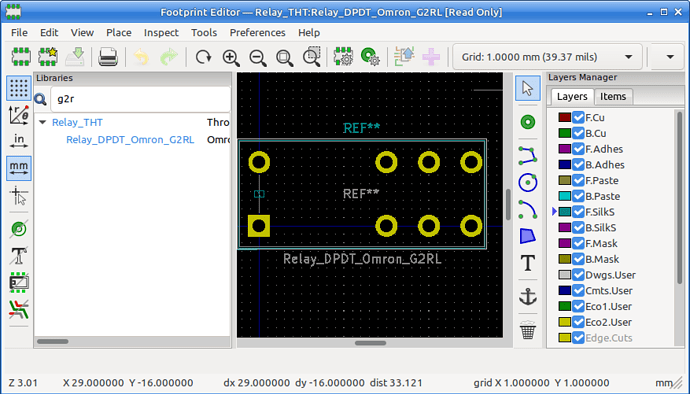 (Do note though that there are different variants of this relay. some have a single switch, others have dual switches for example, so double check)

KiCad also has quite good editors for both schematic symbols and PCB footprints. Learn to use them, and you can make your own (or modify existing) parts so quickly that it’s often not even worth searching the 'net for them.

Disclaimer: Screenshots taken in a nightly from after the 5.0.x releases. The current nightlies are expected to become 5.1. Some features shown here are missing in the current stable 5.0.x. Some dialogs look different in 5.0.x. KiCad version 4 had a very different symbol editor meaning this tutorial is not really suitable to teach symbol creation in KiCad version 4 Quick start tutorial for the symbol library editor. Official documentation for the symbol editor Other FAQ articles worth read…

Tutorial: How to make a footprint in KiCad 5.1.x? FAQ

Disclaimer: Screenshots taken in a nightly from after the 5.0.0-rc2 tag. (KiCad 5 will look very similar but there will be slight differences in KiCad 4) The official docu gives a few hints about how kicads footprint editor works. Other FAQ articles worth reading: What is the difference between footprints and symbols? How does KiCad know which symbol pin represents which pad of the footprint? Creating a new footprint library Tutorial: How to check footprint correctness? What is the meaning o…

Thank you very much for the reply… Very useful!

Indeed that’s the module… a generic Chinese (I’m using Bestep, instead of Songle) relay! I understand how unreliable they are, but I needed a quick solution for demonstration of concept. I want to drive a pump contactor to switch the pump on or off. The contactor works at 110V AC and do not draw so much current.

As I need to drive it via microcontroller, I need to isolate the power going to relay’s coil from the power provided by the controller to switch the relay… that’s where I found this HL-52S useful. I’m testing it driving the coil with a separate 5V power supply, switching the power to drive the coil using a 3.3V microcontroller, and working with 220V AC between contacts… so far, so good!

Thanks for the heads up and I will certainly use a more reliable relay in the final product, coupled with an optoisolator, such as PC817.

I would like to have a footprint for this module showing the coil contacts (JD-VCC and GND), plus the optoisolator (VCC and In1 and In2), plus the contacts (NO, COM, NC).
But as you said, drawing my own component is very easy… thank you very much for the tutorials.