Hello,
I am urgently looking for someone within the KICAD community who would be able to guide me to make an INTERACTIVE HTML BOM on a DIY machine of my design. It is a Tube Mic Pre and i got all the GERBER files.
Paid work, of course.
In advance thanks
Sincerely,
YJ

Gerber files are not sufficient. Do you have original design files? Are they done in KiCad or other software?

I have not read though it all, but it’s manual looks better then average for an open source project 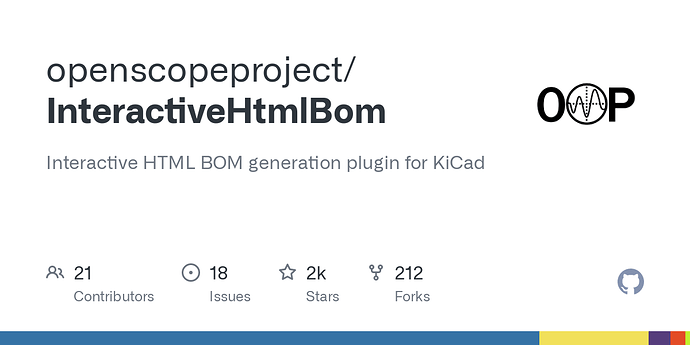 Hello,
Thank you very much for your quick response.
I really wish the design of the PCB had been done in KICAD, but unfortunately I believe that the basic design comes from EAGLE SOFTWARE. And since this vintage preamplifier project has to be sold either as a kit or assembled, I would like to map between the photo of the PCB and the list of components for assembly assistance, like I’ve seen here: https://openscopeproject.org/InteractiveHtmlBomDemo/html/pic_programmer.html

If you have any idea, please.

Thank you very much for your quick response.
Yes I had seen this proposal very interesting, but I do not have the level to use this programming tool myself. That’s why I’m looking for someone to help me do this.

This is not a programming tool, it’s an end user application. It’s true that unless you have KiCad you will have to run some commands in the unfriendly console but I could guide you through that. The more important issue is to get the original design files. If as you say they are from Eagle then you have 2 options: import eagle pcb to KiCad and generate the bom from there or use Eagle ULP script to generate intermediate file that InteractiveHtmlBom can understand.

But if the only thing you have is gerbers then you are out of luck.

Finally, I have the answer. The PCB was designed in PROTEUS 8 PROFESSIONNAL. I do have the original file “pdsprj”, but I’m afraid it’s not convertible to KICAD.

Yeah, in this case easiest way to get ibom is to redraw the pcb from scratch in KiCad.

Yeah, in this case easiest way to get ibom is to redraw the pcb from scratch in KiCad

As I wrote many times before. KiCad can create a PCB from a set of Gerber files. Which I explained in:

Do you have a schematic of that project in some kind of (human) readable format?
How big is your project?
I have some time to spare at the moment and may be willing to do the conversion to KiCad go get some more practice.

Oh I know it can. But the amount of cleanup and fixing that process needs hardly makes it the easiest option.

Creating a KiCad PCB from a set of gerbers is a 5 minute job, and for that you get:

I am aware that the conversion is far from perfect, but it’s much better than re-doing the whole project from scratch.
I once did a protel (not proteus) project to test this, and I had to re-create the schematic from a .pdf file. I caught at least 2 errors in the schematic entry because the DRC flagged them when it compared the netlist from the schematic with the copper tracks on the PCB.

Yes, this project is not so easy. I let you have a look to my first assembled machine, and I send you the PNG of the pcb: 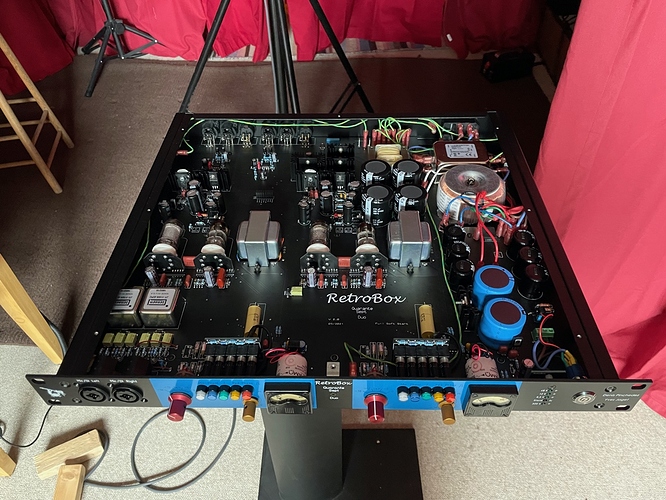 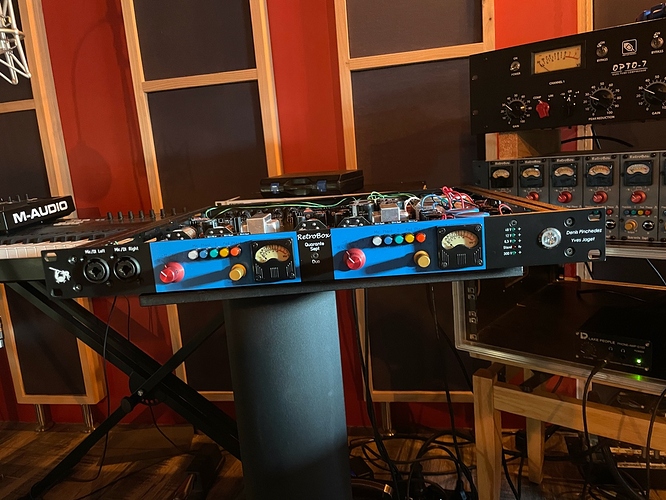 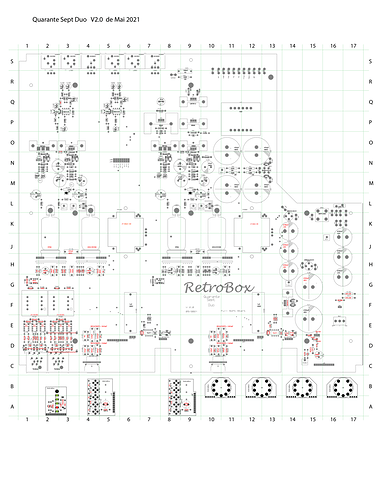 The PCB is big, but it does not look very complicated.
Quite a lot of big parts, and lot’s of empty space in between.
It does have quite a lot of custom footprints, and that would increase the amount of work significantly.

What’s the origin of this project?
I found: https://en.retrobox-audio.com/
So it looks like this is a new design, which implies you also have the software with which the PCB was made, but at first you thought is may have been made with Eagle, so you did not make the PCB.
Apparently it’s also (partly?) based on Redd.47
https://chandlerlimited.com/redd-47-pre-amp/

I am a sound engineer/music album producer in France. I made several recording studios during my life, and I started with electronics in my youth. So I got passionate about DIY and there’s not a machine in my studio that I didn’t make myself. Denis Pinchedez once contacted me and offered to use and distribute his own products, because I already had a “name” in the trade. And over time, we have partnered and we want to start a line of exceptional audio products , available as a kit for DIY. So Denis drew this preamplifier, on an idea that I had to put two REDD47 in a one unit height, which for a tube device was an “exploit”. I took on the whole responsibility of the “marketing” of the project, and to make assembly tutorials on this circuit, the most effective way that I found is the mapping of the PCB image in link with the values of components in a table.
Here is the whole story!!
The REDD47 is the mic pre used by The Beatles and designed by EMI in 1963/1964.
https://en.retrobox-audio.com/ is the temporary web site, until we are able to do the right tutoriel for the DIYer’s!!

My name is Yves Jaget, thank you for your help!!!

The issue is with zones and footprints only capture collections of pads afaik. And if you have any non standard pad shapes conversion doesn’t work well.
Admittedly last time I tried this was in kicad v4 and things may be significantly improved since then but I still think that for a non-trivial board with non-trivial footprints and many zones it may be easier to just redraw things. Maybe do the gerber import and leave just tracks and outline for reference.

Yes, “Interactive HTML BOM” is the main reason why I’m looking to use KICAD, because the demo is exactly what I need to do!!